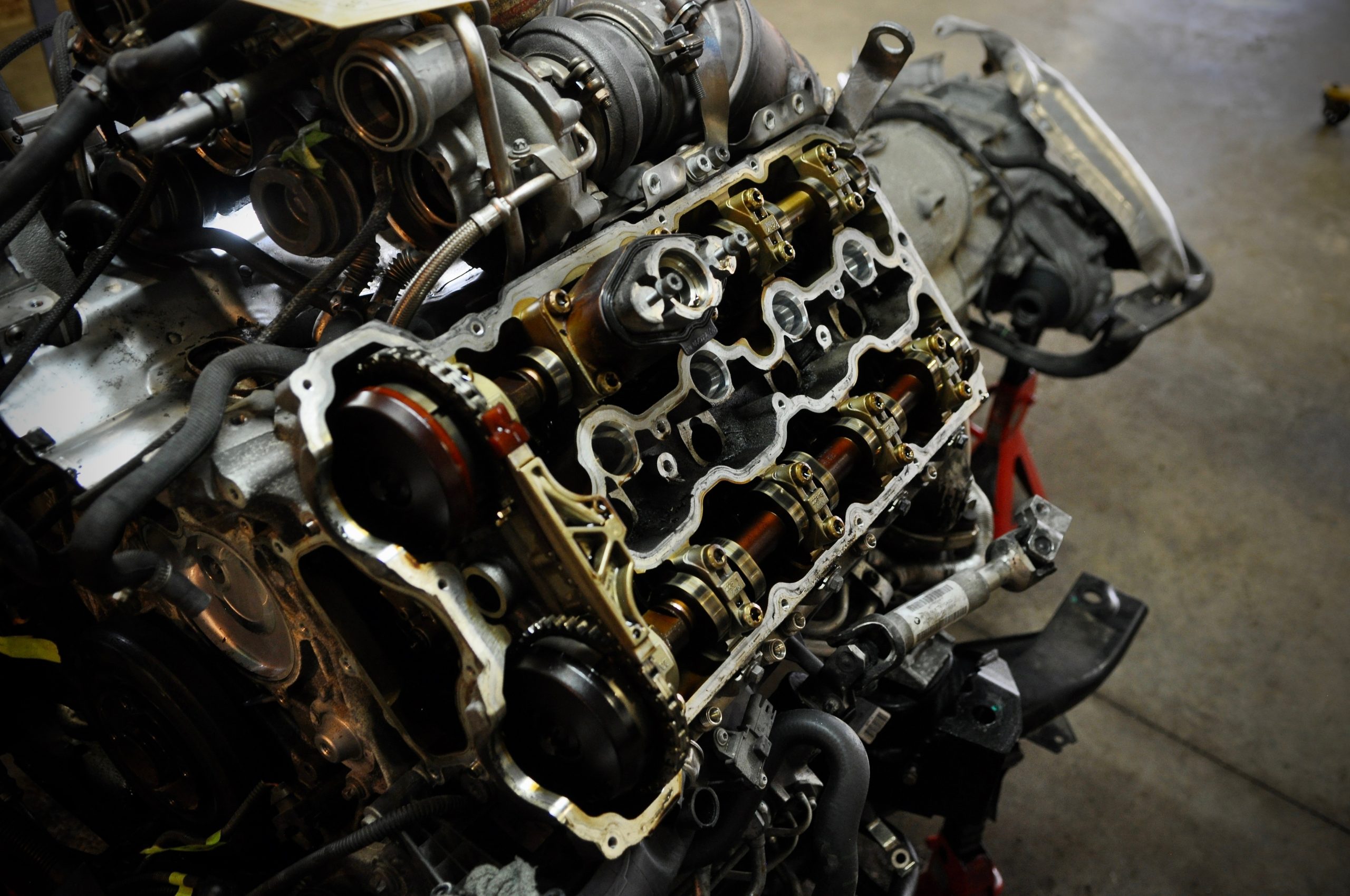 Posted at 14:42h in How to Guides and Common Vehicle Issues by fluidmotorunion 0 Comments
0 Likes
Share

A while back you might remember a blog post we released regarding the BMW N63 engine and its notorious timing chain issues. Well this week at FMU we’ve got a similar issue. In the shop, we have a E70 BMW X5 which is also powered by the 4.4-liter twin turbo N63 engine. However, this repair is also going to include valve stem seal replacement. Keep in mind these issues impacted just about every BMW with the N63 engine, which is used in every 5, 6, 7, X5 and X6 model with a name ending with “50i” made between 2008 and 2013.

A customer brought in their E70 X5 for an oil pan gasket replacement. The car also had pretty heavy oil consumption issues. When we dropped the oil pan to do the gasket we found bits of broken timing chain tensioners. As mentioned in our n63 timing chain blog post, when these tensioners fail it allows the timing chain to stretch, and even jump timing which causes catastrophic engine failure. We also determined that the valve stem seals were failing which resulted in the oil consumption problem. The stem seals slide over the valve on the head and allow the spring to slide the valve up and down in the cylinder head, the rubber in the seal keeps oil from entering the intake port. As these rubber seals wear they start to allow oil to seep into the combustion chamber.
You can see the new vs the old stem seals below. This problem characteristically presents with a blue cloud of oil smoke exiting the exhaust after a cold start. It is important to take care of this problem because the rapid consumption of oil by the engine will quickly destroy the catalytic converters or gum up the intake and exhaust ports, resulting in an even more expensive repair. To get both catalytic converters replaced at a BMW dealership car run as high as $5,000.

When this issue was first discovered, removing the engine and cylinder head from the block was the common method of replacement. Many dealerships have charged upwards of $7,500 to replace the valve stem seals. Depending on the model, the first thing we do is drop the engine and transmission from the car. While the necessity of removing the engine depends on the room the chassis has to work, the risk of accidentally dropping a valve spring retainer into the motor is typically mitigated with the engine out. This is just one of several reasons why this is such a costly and laborious service. As a BMW specialist, we can often nearly half the cost of the dealer quote.
With the engine removed, the engine is rotated into disassembly position using our special timing alignment tools. The camshafts are then removed on this engine and compressed air is used to pressurize the cylinder keeping the valve in place while the spring is compressed and then removed. We then pull the old seal out and replace it with the new one! Doing all 32 seals is a tedious job and it is made more difficult unless the engine is completely dropped out from the car. We also replaced both timing chains and all the guides and tensioners. This job in total took about 55 hours to complete.
Below you can see the cracked and broken timing chain tensioners and old chains. Compared to the new one! If you suspect your BMW might have either bad valve stem seals, or it needs new timing chains, do not hesitate to hit up Fluid MotorUnion! On average we are able to do repairs for 40% less than the dealership, while still maintaining dealership quality and knowledge. Give us a try, we are conveniently located in Naperville Illinois right off of the RT 59 exit on I88. You will be glad you did!