Driving a Ferrari Through the Snow 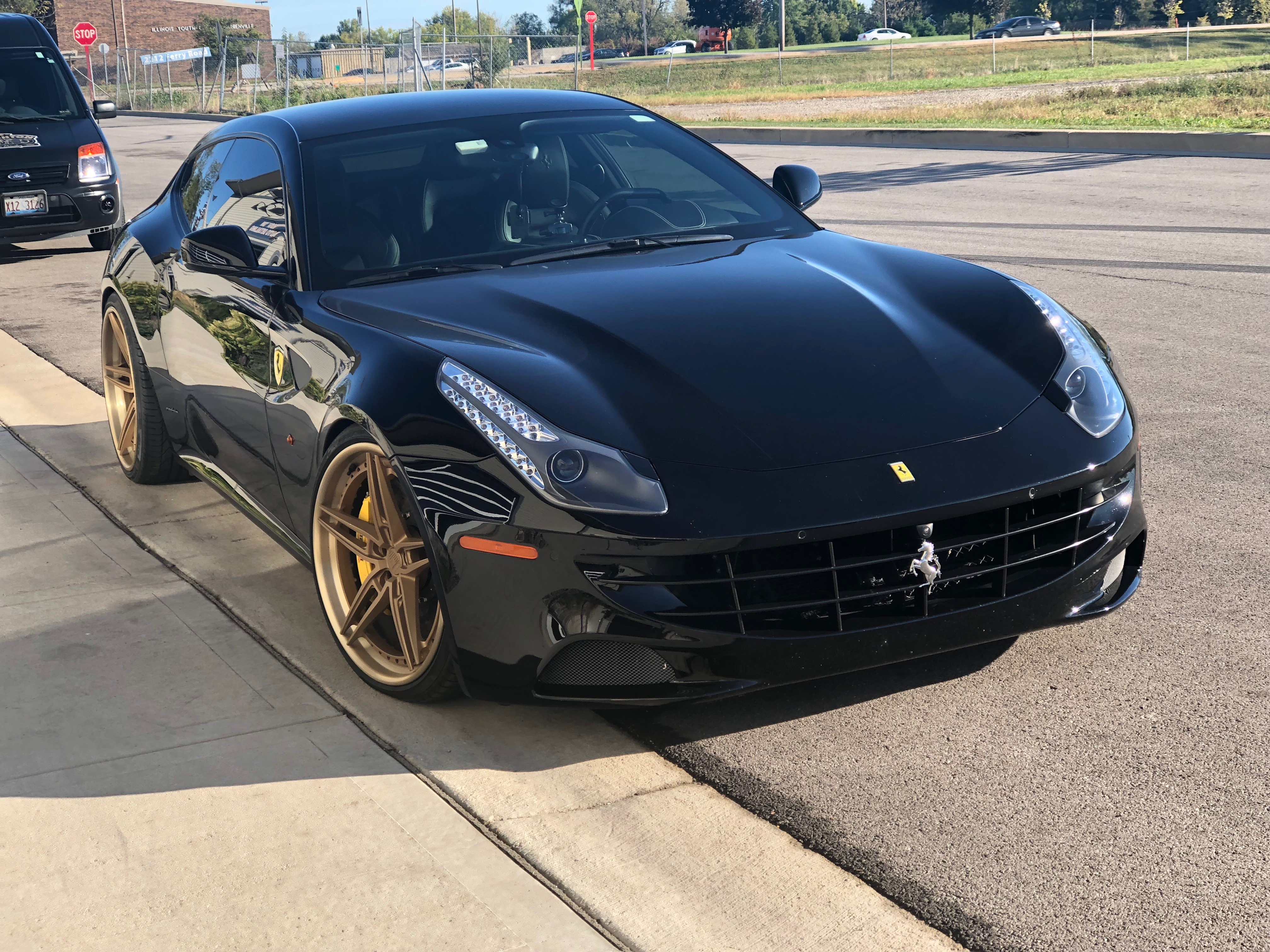 05 Oct Driving a Ferrari Through the Snow

How to drive a Ferrari in the Snow.
Most people would be scared to drive a $300k exotic in the harsh winter. Especially here in Naperville IL, given how harsh the Midwest’s winter season can be. Sure, Chicago winters aren’t able to compete with Alaska, or maybe Siberia but the road conditions that the season brings are among the harshest in the world for a vehicle. A unique mix of subzero weather, lake effect snowfall, the MASSIVE amount of salt used to keep the overcrowded roadways free of ice, and the rapid thawing and freezing that produce a minefield of potholes, mean that cars are under assault from all angles. How to handle these elements, without softening the image that comes with owning an exotic car? You take an AWD Ferrari FF, straight pipe the exhaust and slap some snow tires on!

Released March 1, 2011, at the Geneva Motor Show the Ferrari FF was designed as a “practical” grand tourer successor to the 612 Scaglietti. Right away, this car seemed like a radical departure from the average Ferrari, and that’s because it isn’t your average Ferrari. Built to appeal to the buyers that are exclusively Ferrari lovers who wanted a Ferrari in a more practical package, the FF can seat four people in relative comfort, while maintaining control with All wheel drive. In Fact “FF’ stands for four-wheel drive, four-seater. With all that extra weight to haul around, a 6.3L naturally aspirated V12 engine used in the Gtc4Lusso, F12 Berlinetta/ F12tdf, and the LaFerrari was more than enough. Because it now has the ability to seat four, The Ferrari FF competes with a with a few new cars in its class, such as the Porsche Panamera 4 and the Bentley Continental GT. The all-new four-wheel drive system designated the 4RM system was patented by Ferrari. The route this system as being around 50% lighter than the conventional system that they might have other wised used, and helps deliver all 651 Hp equally the four wheels as needed, as long as the manettino or “little lever” dial located on the steering wheel is in “comfort” or “snow” mode. Ferrari’s first use of original 4RM was in a prototype developed during the end of the 80s, named the “408 4RM”.

This beautiful black Ferrari FF was bought with the purpose of being a Daily “winter beater”.
Living in Illinois where winters can produce good amounts of snowfall, Ferrari’s first four-wheel drive car is a no-brainer for Ferrari lovers, and with the added seats this is the ideal choice to have as a winter all around driver. Once temps start to hover around 45 degrees, Summer tires can become a hazard. October in Chicago tends to be the time, so this customer is thinking ahead by changing his summer tires and rims for a set of winter tires and rims now. But being that this is a Ferrari, not any old set will do. So the OEM F12 wheels were put to the task of giving the dignity it deserves while giving it the traction needed here in a snow state. Originally, the customer came in hoping to put winter tires on the fitted ANRKY wheels, but after we informed them of the extream difficulty of sourcing 22in winter tires, we quickly came up with an alternative… Pirelli 235/35R20, and 285/35R20 WINTER SOTTOZERO SERIE II tires mounted on some F12 Berlinetta OEM wheels, powder-coated and treated in a custom color scheme! Winter tires in wide, low profile sizes are extremely limited, but the Pirelli P-Zero tires in the award-winning Pirelli Sottozero series II trim will give this Ferrari FF the grip it needs for winter. Pirelli has always been one of the top choices for Ferrari’s and it goes without saying the Sottozero series II will always be their choice for winter driving. 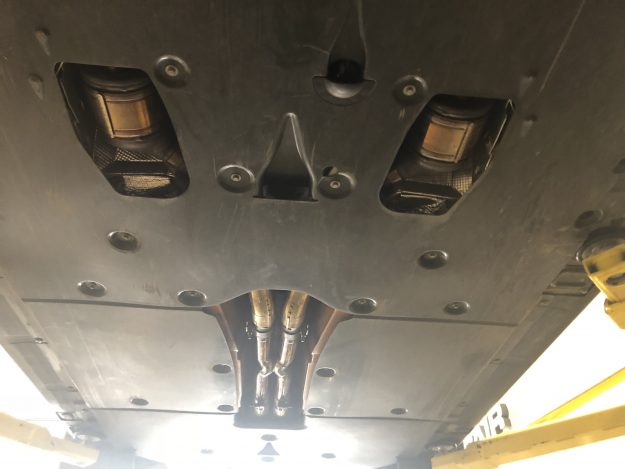 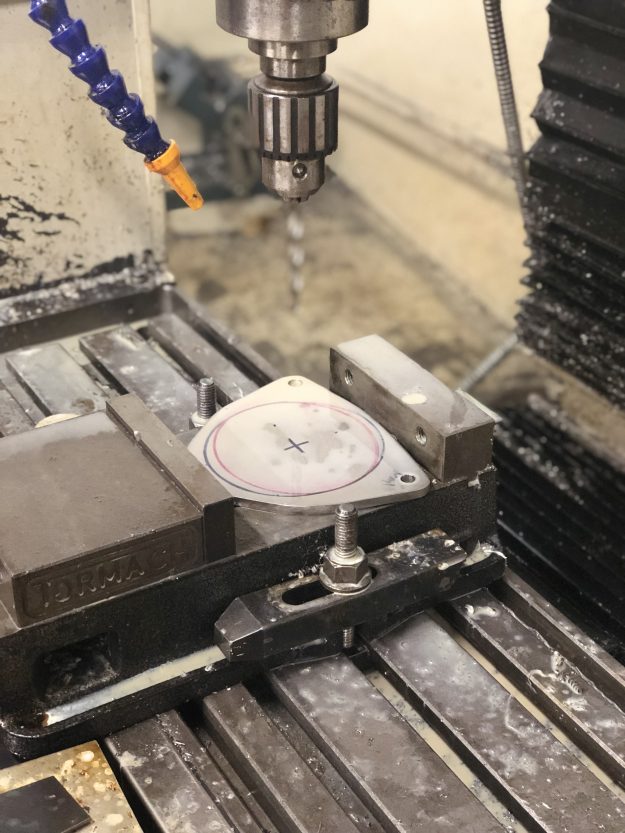 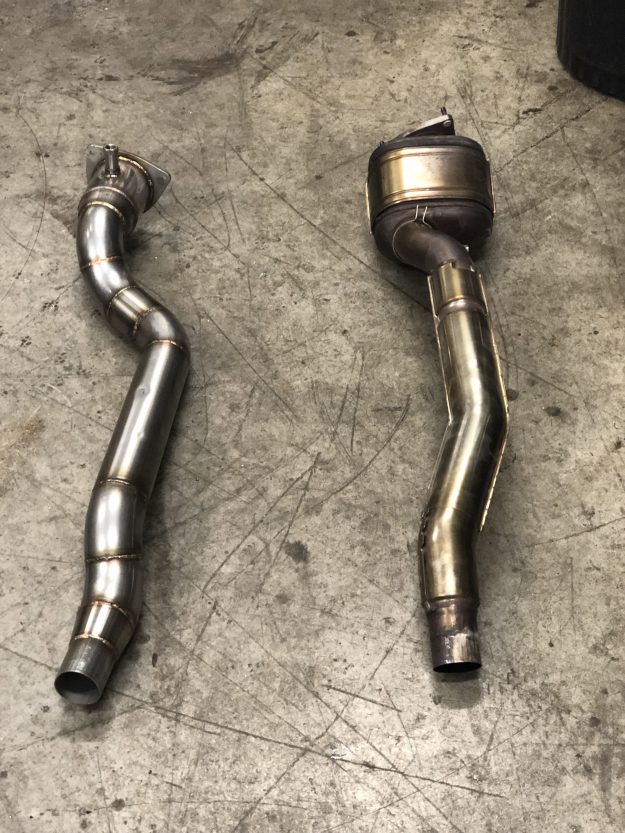 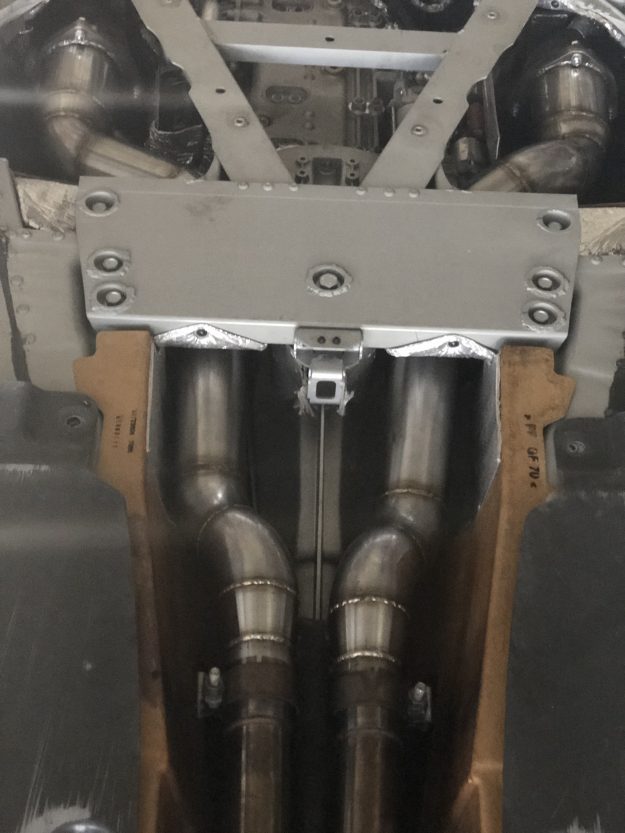 The Ferrari FF is supposed to be a comfort and refined Grand Tourer compared to their typical “sports cars”, so as you would imagine there have been many complaints in regards to the stock exhaust on the Ferrari FF being too quiet in the cabin. Some people want to be able to hear this beautiful V12 engine inside the cabin, so an IPE rear exhaust system was fitted. Other still want to have everyone else hear it too, so that’s where we come in! Since the exhaust note was not quite loud enough for this owner we are upgrading the exhaust system by replacing the factory downpipes with a set of in-house custom fabricated test pipes that will give this 651 Hp naturally aspirated V12 a new sound the owner can be proud of. Here at Fluid MotorUnion, we can fabricate all parts needed in order to make sure that the parts are a precise fit. These Fabricated parts also come without lifetime guarantee. While the mere thought of riding the 651 Hp V12 through the snow may be exciting enough, a new set of straight pipes that scream every time the pedal is pushed will be the cherry on top of an ice cream Sunday.

Here at Fluid MotorUnion, we take pride in every car that comes through our shop. This much pride also comes with a lifetime warranty on any one of our custom exhausts. We are located off route 59 exit of I88 in Naperville Illinois behind Top Golf. Make an appointment today to get your car in the swing for winter. Send us an email at Blog@fluidmotorunion.com or give us a call (630)305-3054