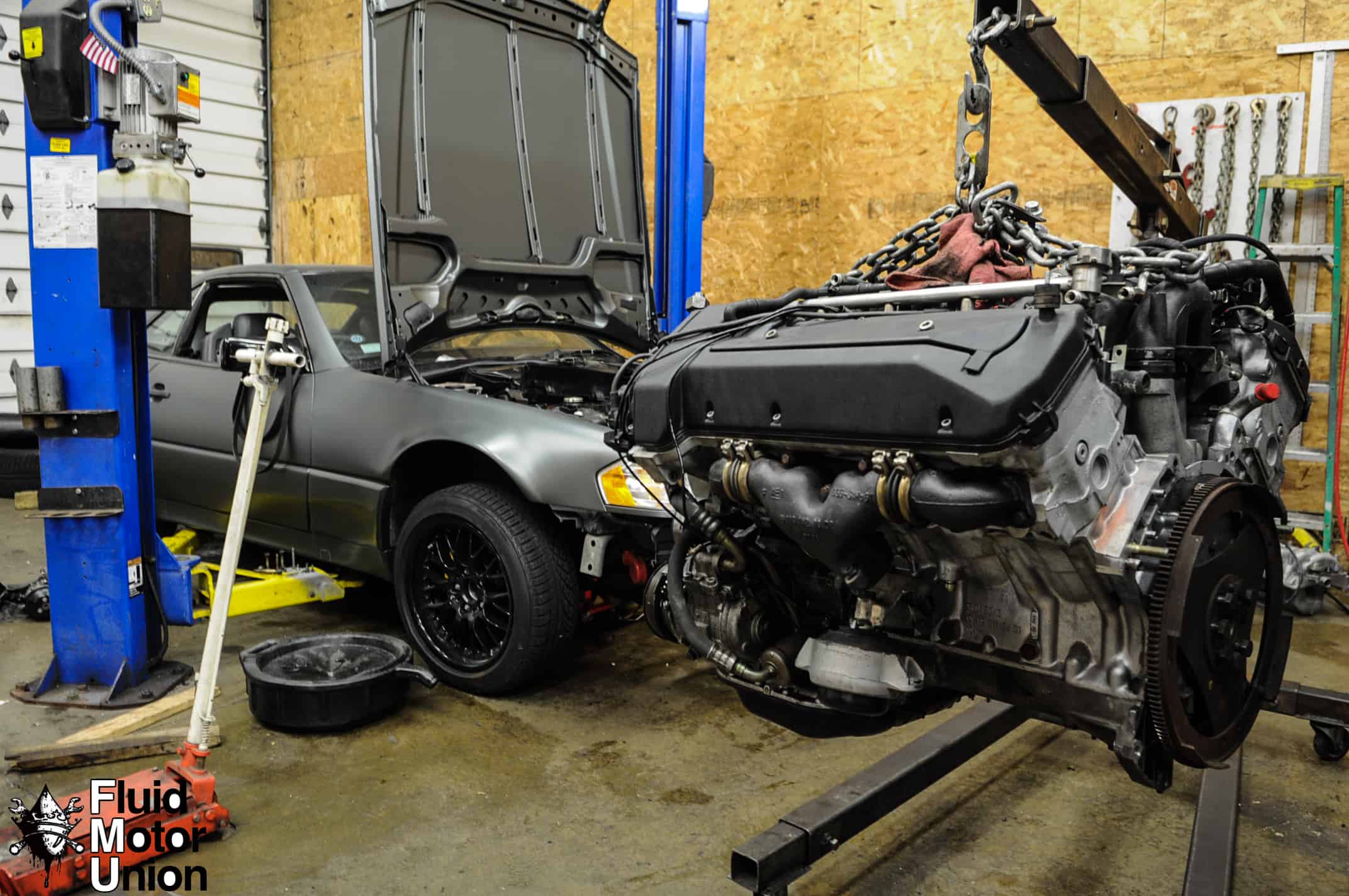 Posted at 15:17h in Blog by fluidmotorunion 0 Comments
0 Likes
Share

Not every engine will last forever, in fact, most won’t. Wear is typical for all moving parts that facilitate metal on metal movements. The best oils, additives and even the most diligent maintenance won’t be enough for some engines. No matter how you cut it, no engine manufacturer designs a component to last forever. Controlling costs, technological limitations, design oversights, and even planned obsolescence are just some of the problems designers have to deal with when producing an engine. This means that at some point chances are you may be the owner of a vehicle that experiences an engine failure, and if you live in a climate that experiences extreme cold, the odds are even greater that you will have at least some Cold Weather Car Problems. 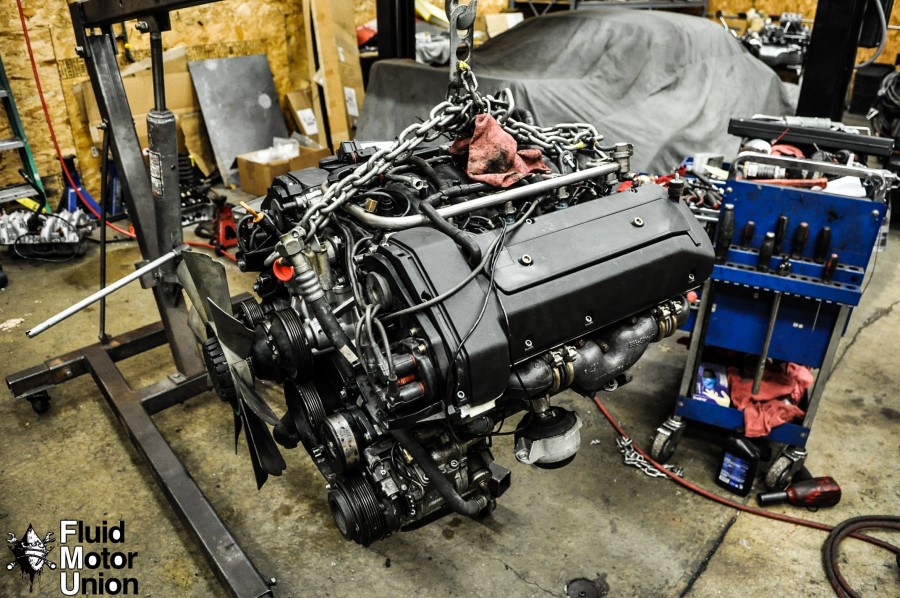 We’ve talked before about the effects of Chicago’s winter weather on vehicles. The cold puts a strain on many components, but the engine is most definitely the hardest hit. The low temperatures can cause hoses, gaskets, and tanks to contract, making them brittle and less likely to seal. This can cause a leak which can lead to low fluid levels, damaging vital components. However, the most potentially catastrophic issue that can run into in cold weather relates to oil supply. In cold weather, the viscosity of oil increases, meaning that your oil is now harder for your pump to pick up and supply lubrication to the necessary mechanical components. This increased difficulty moving the oil means that during the time it takes to get oil to the necessary components, increased friction occurs. This increased friction is especially detrimental to engine blocks lined with Alusil. 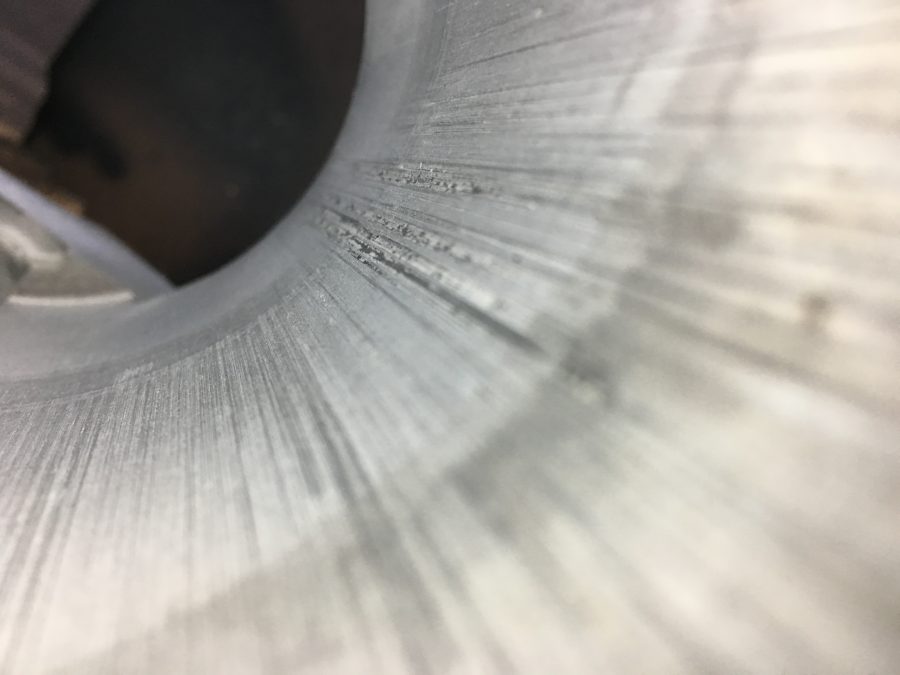 Alusil is a metallic alloy that is often used in the construction of aluminum engine blocks that do not use a steel liner. Porsche, BMW, Mercedes Benz and Audi all use Alusil in the construction of a large portion of their engines. The silicon precipitate surface hardens when etched, but will still hold oil due to its porosity, making it a superior bearing surface. This means that engines don’t need steel liners and can, therefore, be even lighter, which means more efficiency and better gas mileage. The problem with Alusil is what we here at Fluid call “bunching”, a more descriptive term we use to describe galling on a single surface. With an iron block or steel lined engine, wear or increased friction will sheer pieces abruptly off, causing scoring or scratches. However due to the “softer” nature of aluminum, it is more likely to deform instead of sheer, and that bunches the material together, which in turn drags more materials with it. The end result is a snowball effect of catastrophic engine failure. Because Alusil is a complex industrialized process, the means to recoat damaged liners is difficult. Very few but the most specialized rebuilders have a cost-effective method for replacing damaged cylinders. This means that if the engine is damaged, the cost to have it fixed will likely exceed the cost to replace it with a known good used engine. This is unfortunate, as many older vehicles will likely be scrapped due to the excessive cost of fixing vs the value of the vehicle. 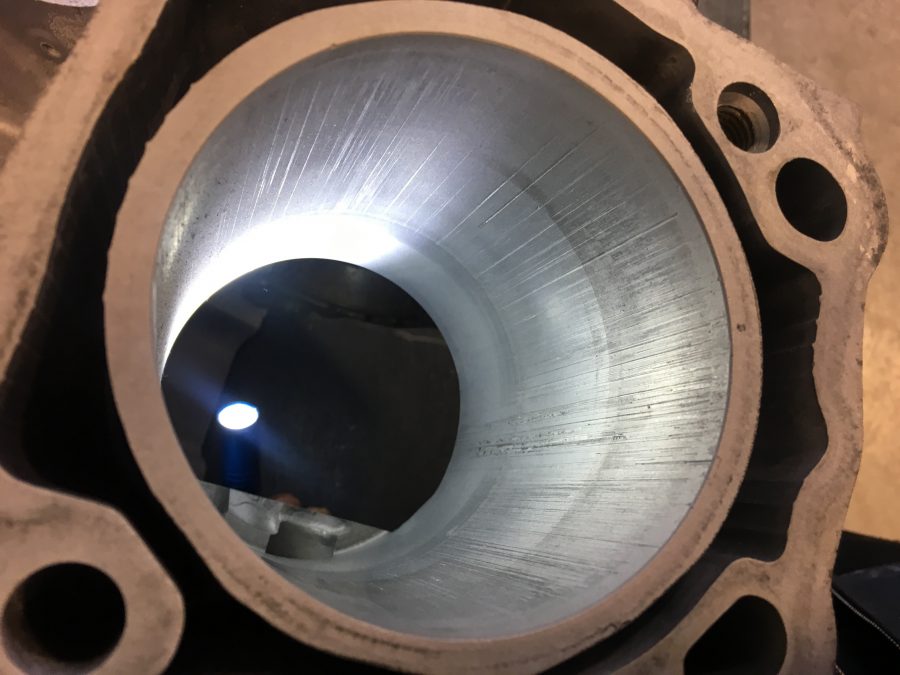 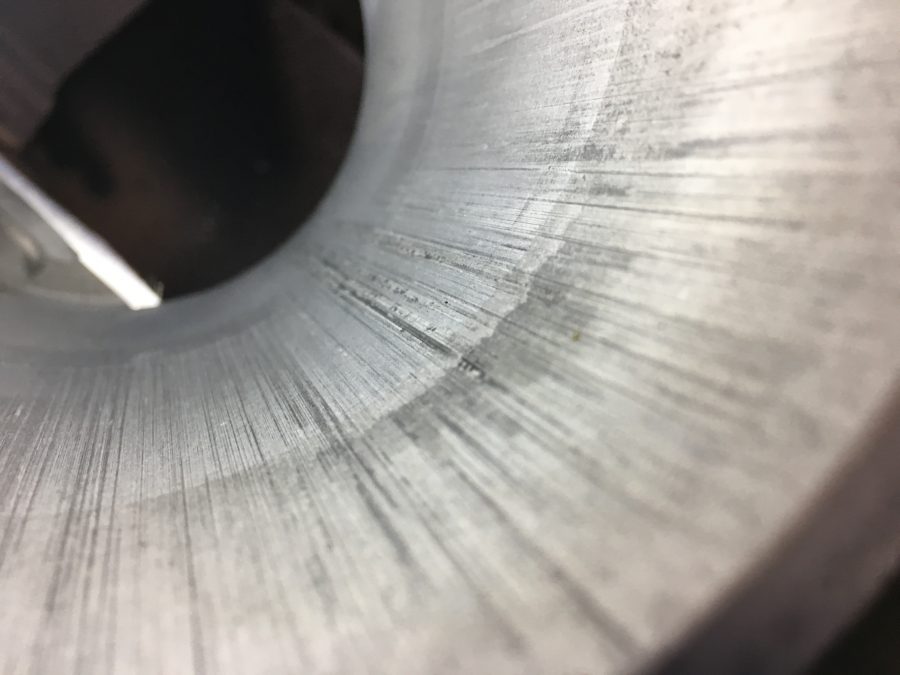 What can be done to protect your engine from Alusil bunching? Optimally, limiting cold starting at extreme temperatures to a minimum is ideal. The less cold the better the start. We do understand that isn’t always an option for everyone so keeping cars in a garage helps, even if it’s not climate controlled. a running engine tends to hold some latent heat, so protecting the vehicle from blowing cold allows it to not drop temperature as much as a vehicle left outside. If it’s a car that’s been sitting for a while, I would honestly recommend waiting to start for a few days of above freezing temps. There’s little you can add to protect an unstarted vehicle in subfreezing weather, but there are products that we recommend that can help protect future cold weather starts.

We don’t typically recommend additives, but Lucas oil stabilizer is one of my favorite protectants for warding off cold-weather car problems. If you watch this video you will see the oil travel to the top of the gear. This stickiness is what will coat the cylinder walls after the engine has been running. With oil sticking to components, you are less likely to have increased friction during cold weather starts.

One of our previous long-term projects, Germaine’s Mercedes Benz SL500 engine was having massive smoking issues while running. A quick compression test showed that the engine was low on compression in cylinders 6 7 and 8. An inspection with a borescope revealed heavy scoring on the cylinder walls. Now as we had previously mentioned, the cost to fix this motor would easily exceed the cost of a known good used engine so the customer decided to go with a used engine that carried a 90-day warranty, a solid choice indeed. 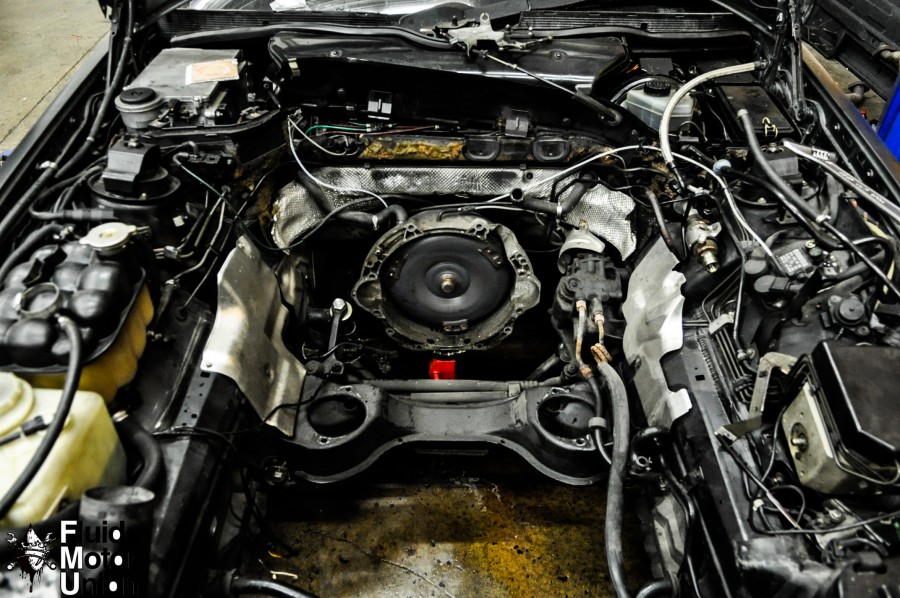 This motor is known as the M118 V8 and was used in many Mercedes of the same era with the “500” designation. This motor had a few subtle differences such as oil pan and a few sensors, so the photos highlight the process of engine removal and switching the old parts over. 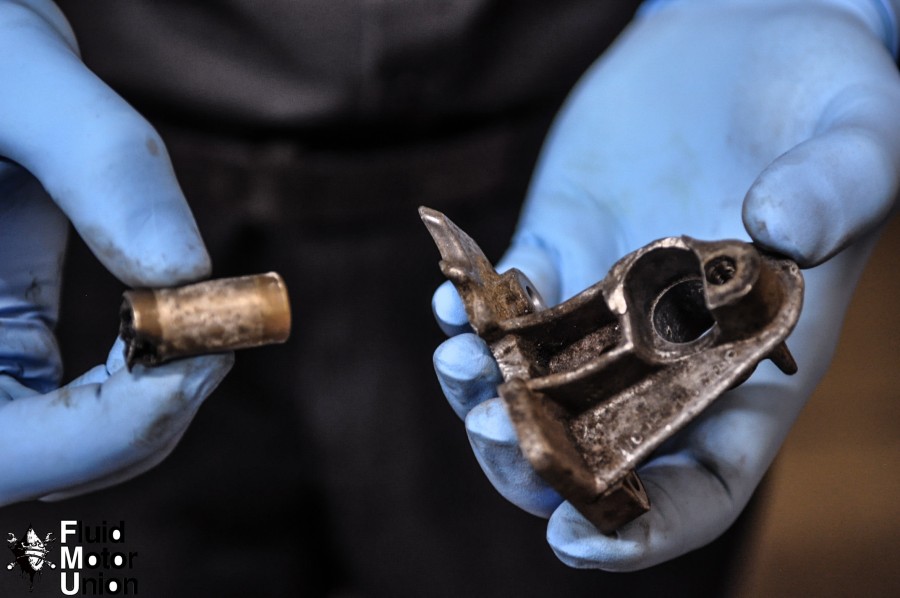 Are Cold Weather Car Problems causing concern for you and the engine in your vehicle during the extreme winter Temps? Are you having issues with a smoking engine or rough running? Are you worried that your engine failed and would like some advice on what to do next? The experts at Fluid MotorUnion can guide you into the right decision for you and your vehicle. Just give us a call at our Naperville location by dialing 630 305 3054 or shoot us a question by emailing Blog@FluidMotorUnion.com. Don’t let the cold weather kill your car! 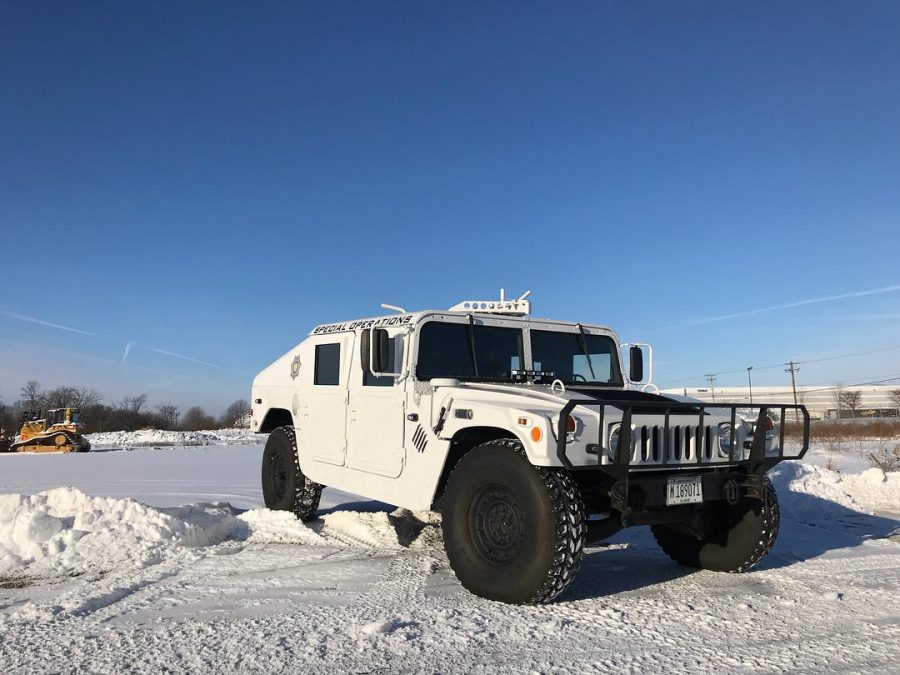