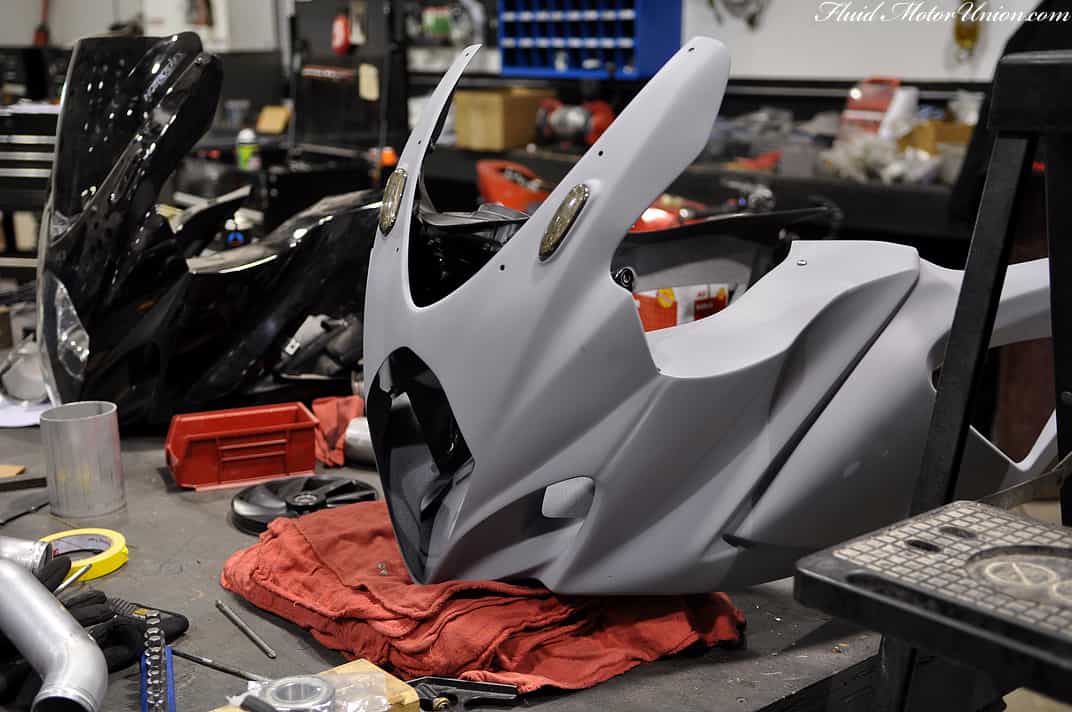 Welcome back to Fluid MotorUnion’s daily blog, which is now being helmed by…exactly the same person that it was last week.

Well…kind of. FMU asked your humble narrator to complete a week’s worth of extra blogs prior to his departure, as they’re a bit shorthanded this week. So…it’s much of the same for another five days at the very least. Once you’ve finished wiping the tears of joy from your eyes, let’s jump right back in as we always do.

We’ll be taking a look at the turbocharged Suzuki drag bike today. With the new aluminum plenum finished and in place, it’s time to address a few little additions to the bike. First, the fuel pressure regulator needed to be moved slightly due to the size differences between the new and old plenums. So, with a little bit of steel and a little bit of welding, we fashioned a bracket to hold it securely in place, just in a slightly different place than before. With that out of the way, we almost forgot that we haven’t shown you the new front fairing yet. Instead of being a multi-piece affair, this new front fairing is constructed from a single piece of fiberglass for easy trackside removal. It’s not painted yet, as we don’t want to paint something fresh, only to have it sit around and open itself up to potential scratches, as it’s being taken on and off somewhat often. Therefore, primer gray it stays. Now it’s on to the fun stuff. If you made it through the title of today’s post without singing The Simpsons’ “The Garbage Man Can,” then congratulations, because that wasn’t the reference we were going for; it was merely a bonus. Instead, we’re fabricating a new custom oil catch can for the bike that will be placed conveniently underneath the seat. It’s a can…under your can. God, we’re witty. As always, tacks come first to ensure that fitment is precise. Once that’s done, we weld one side at a time and allow it to cool, as aluminum will move and distort under the heat created during the welding process. Slow and steady wins the beauty pageant, as none of us say. Then again, this catch can SHOULD win a beauty pageant — look at that back side! Va va voom. If this were a cartoon, this would be the point where our eyes pop out ten feet and our tongue unrolls onto the ground like a large carpet. Once the catch can was allowed to cool, we placed it in its new home and attached the fittings that will connect to the existing PCV system. The drain is on the bottom most front face of the can, and might be a little hard to see. The whole thing is mounted using those two pillars you saw earlier in the pictures, which connect to bolt holes on an existing piece of the bike’s underbody. With the seat on, you can barely even tell it’s there. With the gas tank on, it should be all but invisible, save for a tiny sliver viewable from the side. Even then, all you see is the weld, so it’s not like anybody will be complaining. That’s all for today, folks. Come on back tomorrow for the continued dissection of Gold Wheels’ innards, along with a similar undertaking on a customer’s X5! Have a great day!