23 Jan The Smaller Side

Today, we’ll be exploring some of the smaller things around the shop. After all, it’s not the size that counts, it’s the effort you put behind the work.

When it comes to fabrication, big or small, we’re here to get the job done right. Our first example of a “small” job is on our client Ken’s E60 M5. He’s a big fan of the drags, and has taken his ten-cylinder behemoth onto the strip on several occasions, posting some surprisingly great times. However, there are always steps that can be taken to shave off a few fractions of a second. His full aftermarket exhaust, while being lighter than stock, is still carrying weight that contributes to a slower ET and trap speed. For that reason, he brought the car to FMU’s fabrication department, where we are creating a set of very short turn-downs that come right off the header. 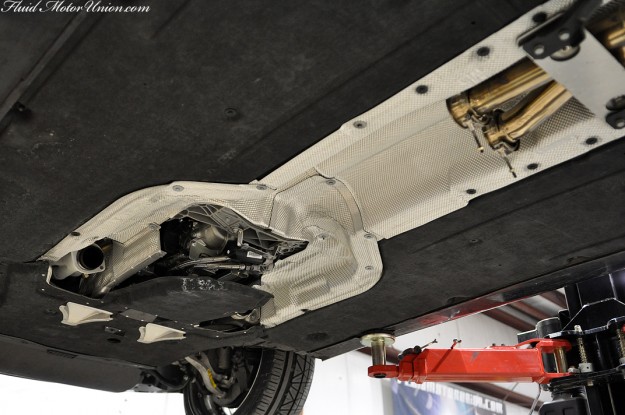 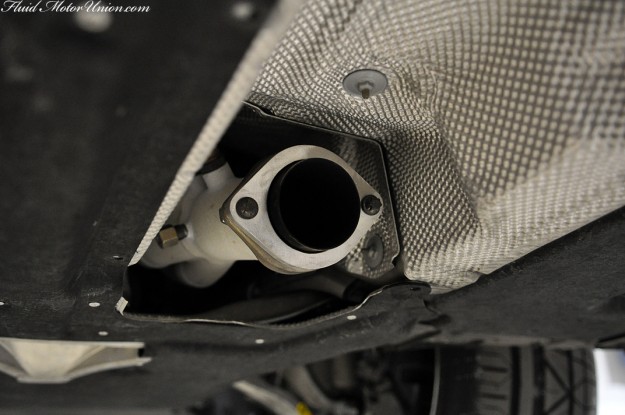 As you can see below, it’s not going to be very large at all, but that doesn’t mean we’ll be shortcutting the welding or anything like that. It will still be backpurged with inert gas and TIG welded to perfection. The flanges were milled in-house from billet, as well. It should also help the S85 throw some gnarly fireballs, which is a shame only because he’ll be dirtying up what is undoubtedly the cleanest E60 M5 underbody we’ve come across. We’ll have the finished product up here for you soon. 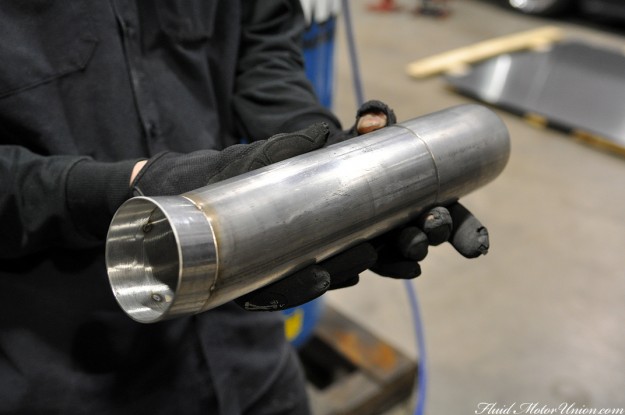 Now, speaking of doing the job right, another E60 M5 rolled through the shop this week. When we put it up on the lift, we were surprised to see a bit of on-the-quick exhaust work. When you’re looking to prioritize cost efficiency over the final product, there’s going to be a sacrifice in quality. Depending on where you go, that sacrifice can manifest in different ways. On this setup, in which part of the OEM midsection (the secondary cats) was cut out and replaced with a MIG-welded section of straight pipe, the two new pieces of steel were braced by a piece of steel rebar. Rebar, as you may know, is used primarily for reinforcing concrete. Even though it’s a small piece, it’s still rebar in an exhaust system. So, there’s that… 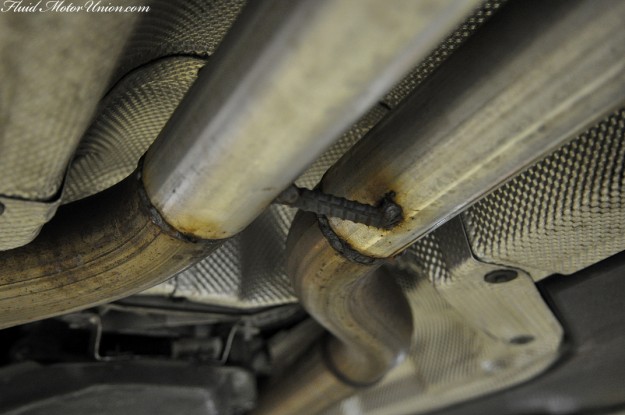 In the OEM midsection, there is a small inward bend in the pipes, where the exhaust is bolted to a cross-brace on either side of the piping. In this case, the muffler shop that did the work found out that replacing this kink with straight piping wouldn’t provide enough room for the braces to be reattached, at least somewhat the same manner as before. They decided to modify the cross-brace instead, cutting a square hole into it and jamming a rubber exhaust hanger between the two pipes, sealing it off with a bolt. It works, kind of, but the new hole in the cross-brace was not covered, which can lead to unwanted oxidation on the surface of the exposed metal. It also doesn’t look very nice. As we’ve stressed before, you get what you pay for when it comes to fabrication work; yes, quick and easy might be cheaper, but it’s also something that you wouldn’t want to put on display at a car show. 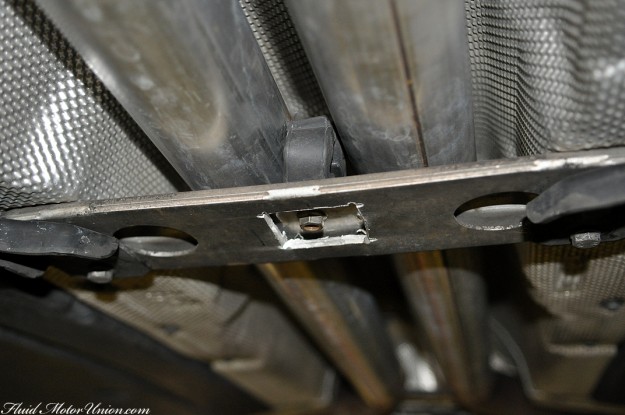 Let’s move on to other, less depressing small things, shall we? This E90 M3 rolled into the shop last week for some pre-emissions work. We took a couple sideways glances at the exterior, as we thought it looked familiar, but it’s pretty much your garden variety, stock appearance M3 sedan. 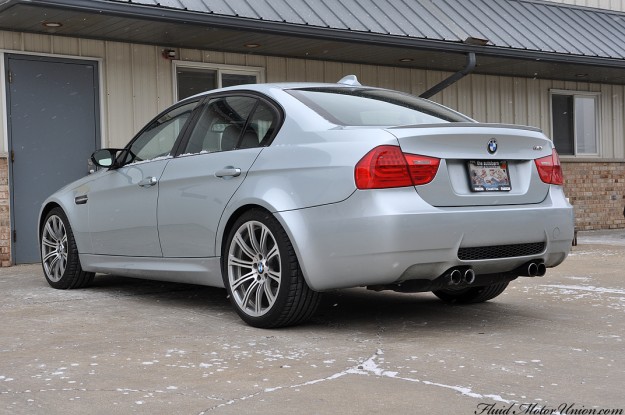 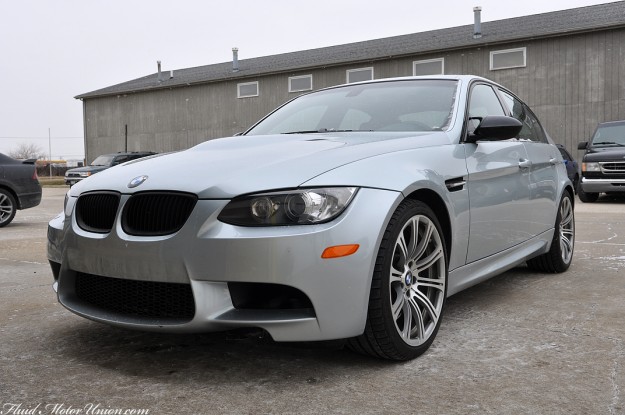 However, after entering the car, the appearance of one small trinket reminded us exactly where we’d seen this car before — it was ours! Last year, we sold the E90 M3 after we’d run our course developing the velocity stack system. Since then, it went between a couple dealerships and was sold off. Now, though, it’s back for a bit of service work. Remember how we had the Aquamist HFS-3 water-methanol system installed on the car? Well, when it came time to remove it, we had to plug a hole in the center console that was left over from the Aquamist power switch. So we milled our own small ///M button and called it a day. Seeing as how ours is the only M3 to have that, it’s a pretty dead giveaway. It’s always nice to see old faces. 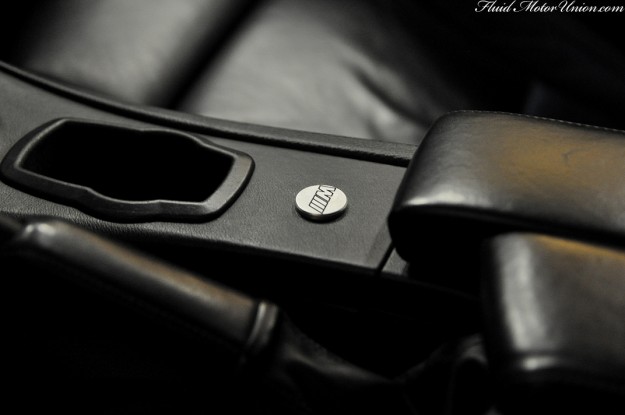 Finally, we move to a job that’s only small in terms of the time that’s devoted to it every day. Tom isn’t about to stop work during business hours to work on his Z32 Nissan 300ZX, so he devotes an hour or so every night to the build once the day is over. Even with that small timeframe, he keeps making leaps and bounds in his build. Last time we looked at his engine bay, he was working on smoothing out the newly-laid body filler in preparation for painting the engine bay. Now, he’s made good progress on that front, and things are moving closer and closer to the paint booth, metaphorically speaking (he has the car on jackstands, so it can’t actually move). Can’t wait to see a fresh coat of paint on this engine bay; between this and the actual wire tuck he has planned, this car will be a show-stopper. 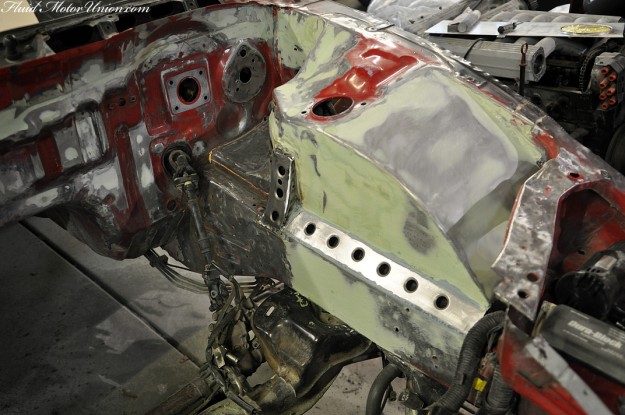 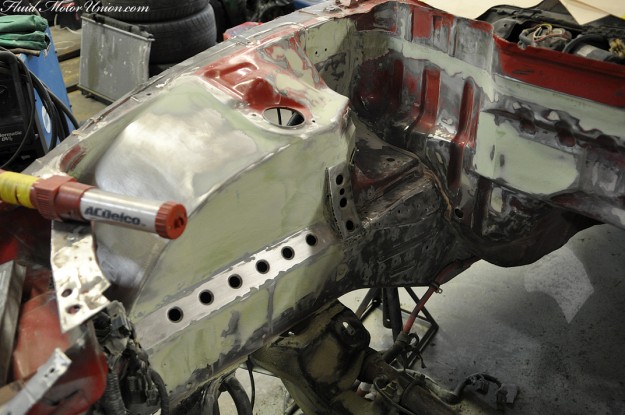 That’s it for today! Have a great day, and we’ll see you back here tomorrow!