There might not be any on the ground, but thanks to Snow Performance, today is a Snow day nonetheless.

You may remember the Dinan-equipped E90 335i that was in the shop last week for summer tires, as well as a new set of ceramic coated Macht Schnell downpipes. Well, that’s not all he was here for. In addition, he chose to have us install his Snow Performance water-methanol injection system. For those of you who aren’t up on the lingo, we’ll explain water-meth in the paragraph below. If you know all about it already, feel free to skip ahead.

The primary purpose of water/methanol injection is to cool the intake charge. It does this by a process known as chemical cooling or latent heat of vaporization. The water and/or methanol is injected into the manifold under high pressure; being forced through a small orifice under high pressure causes the fluid to evaporate. According to laws of thermodynamics, in order to do so, it must take on heat. This heat comes from the surrounding air, thus cooling the intake charge. This is the same way refrigeration works, forcing the refrigerant through an expansion valve under high pressure to vaporize and absorb heat. Adding methanol to the water, once injected, will also increase the octane rating of your fuel. It does provide cooling when it vaporizes, but only about half that of water. It’s the cooling effect and bump in octane that primarily allows you to run more aggressive ignition timing, not necessarily the enriching of the fuel mixture.

So with that said, let’s install the kit! Here’s a shot of the meth-less engine bay, along with the kit we’ll be installing. 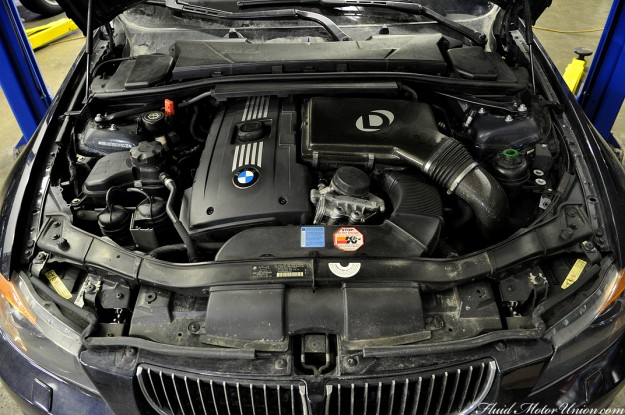 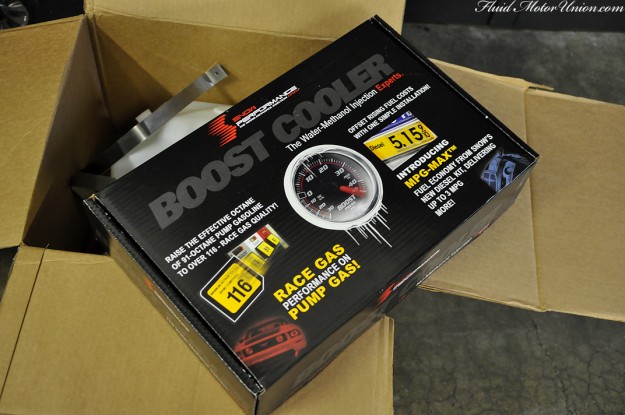 After rolling the 335 over to fabrication, where we’d be installing the kit, we set about removing the floor from the trunk in preparation for the first step. That step includes mounting the water-meth’s pump, which we placed under the trunk floor. We then mounted the bracket for the water-meth tank on the floor as well, close to the rear of the trunk by the backseat. We have it off to the side so that the owner can still utilize the pass-through between the cabin and the trunk. 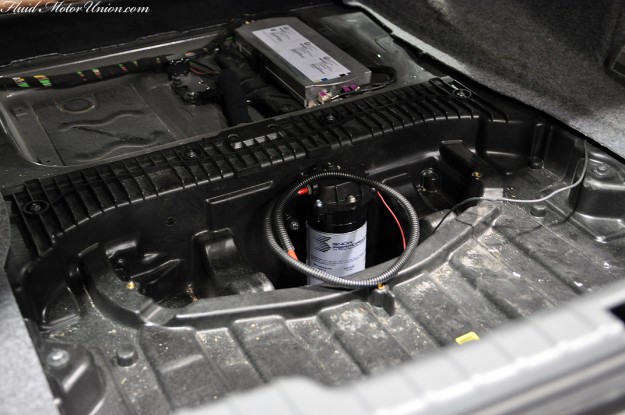 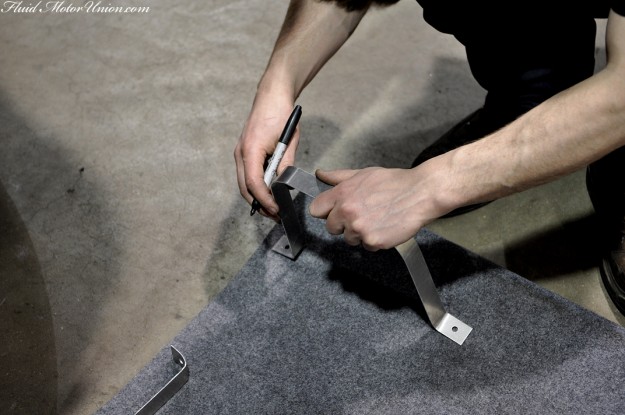 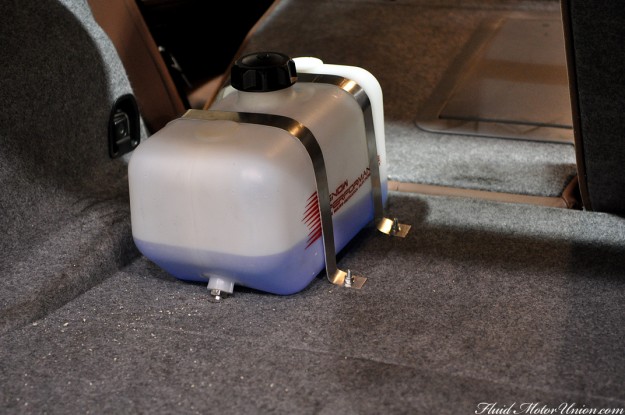 From there, we ran the feed line for the water-meth, as well as the wires for the kit, underneath the underbody panels on the bottom of the vehicle. 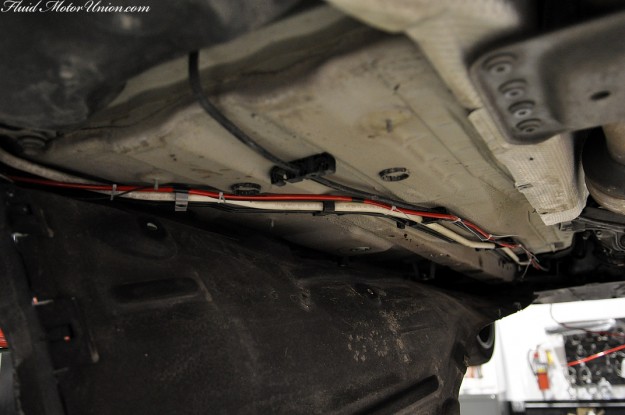 With the majority of the rearward work finished, we moved up to the front of the vehicle and doubled our manpower. While Tom attached the solenoids that help deliver the water-meth mixture, Keller went to work finishing up the wiring for the control unit that resides inside the cabin. 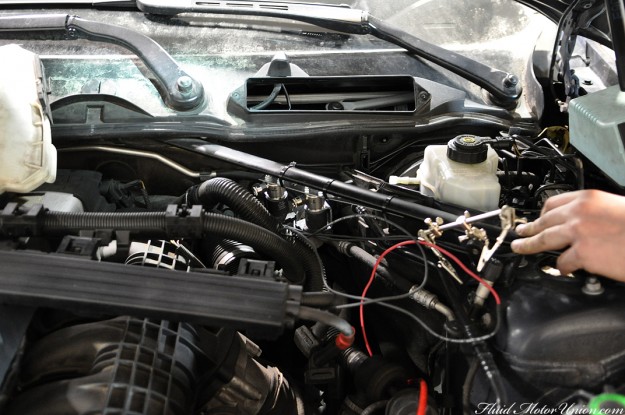 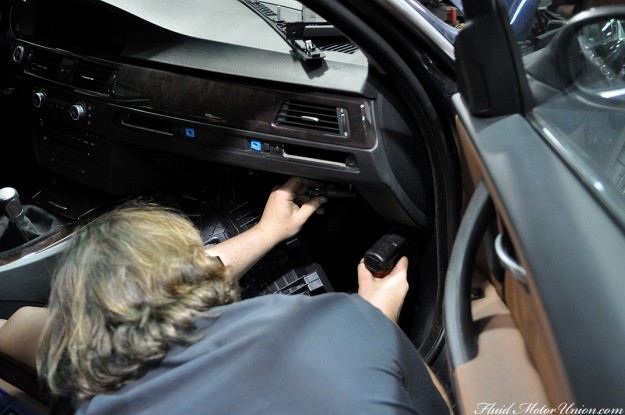 Making sure to follow Snow Performance’s instructions, we mounted the actual water-meth delivery nozzles on the intake elbow, prior to the manifold. You can see the two nozzles deep in the engine bay, connected to the solenoids via Snow Performance’s bright red lines. 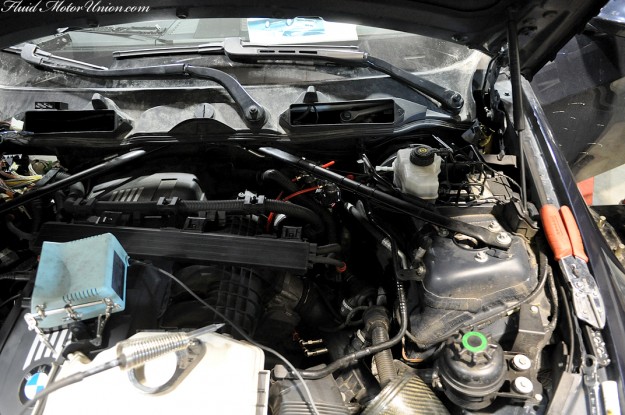 Take a good look at the picture above, since that’s the last you’ll see of the system. Thanks to BMW’s copious amounts of plastic shielding, as well as the massive Dinan intake, this Snow Performance water-meth system is completely invisible during normal engine bay inspections. Don’t believe us? Take a look below and see how much of the kit you can make out. 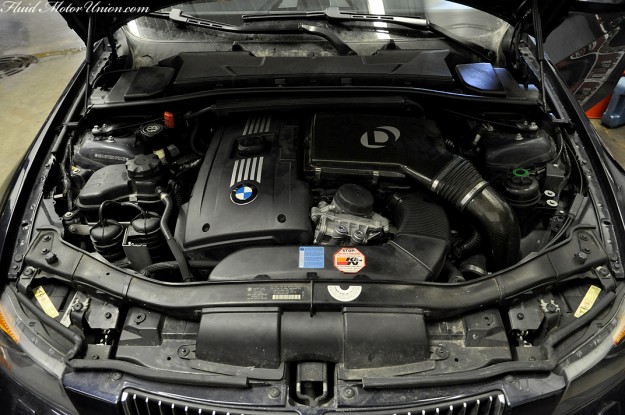 And that’s it for today’s FMU blog post! See you tomorrow; have a great day!

Always wanted to see how difficult it was to do Water/Meth, many thanks for sharing 🙂