Today, we’ll be looking at one project that encompasses each of the two senses mentioned in the post’s title.

We’ll start with sight. Tom, in his few hours of spare time after work, is putting together his Nissan 300ZX in a way that will snap necks and yank eyeballs out of sockets. Part of that aesthetic involves going lower; so low, in fact, that he has to modify the wheel wells to get everything to fit. Adding more space in the wheel wells is not an easy task, and unless you’re confident in your knowledge of welding and metal fabrication, is better left to the professionals. Last time we looked at the car, he’d taken the first step in adding some space for his wheels by cutting out the old body metal and prepping the edges for the shiny, new metal. After creating a single baseline that dictates the overall shape of the new metal, Tom set about creating a series of templates with manila folders (our go-to for templates, since we have so many lying around) and then recreated it in metal. The first pass of MIG tacks came out nicely, from both the inside and outside. Here’s that first pass on the passenger side, from both the inside and outside of the new metal. 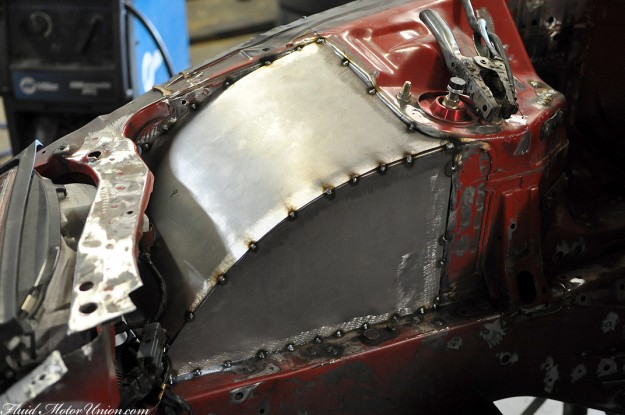 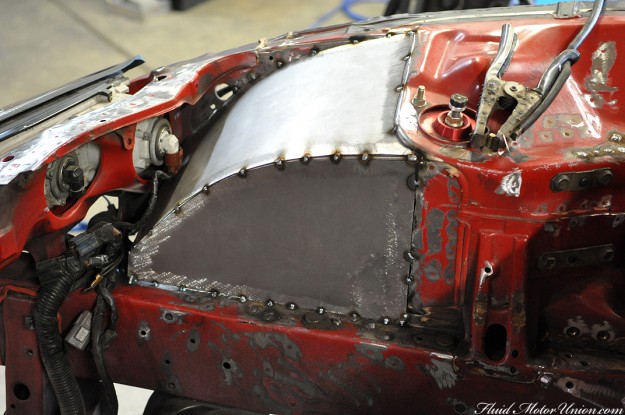 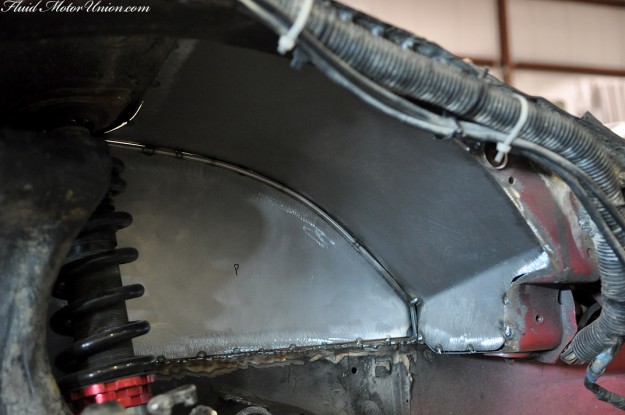 Now, you can’t just go about welding this metal all willy-nilly. Metal, whether it’s aluminum, steel or otherwise, will react to heat by softening and potentially warping. By doing all the welding in a single pass, there’s a significant chance that something will get warped or otherwise screwed up. For that reason, Tom’s doing a series of passes during which the steel becomes closer and closer to being a single, fused piece of the body. 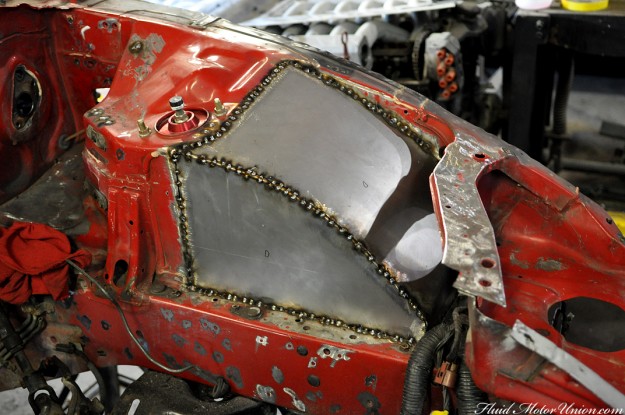 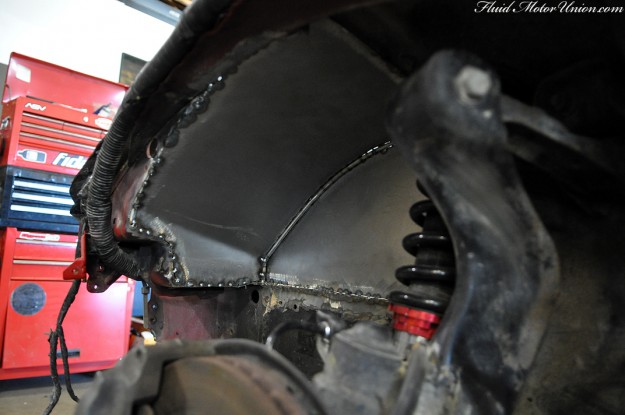 Once all the welding is complete, all that’s left is to grind down the welds, which has already taken place. Once everything’s ground down a bit, you can finally start to see the new shape that will be surrounding the wire-tucked motor in his engine bay. 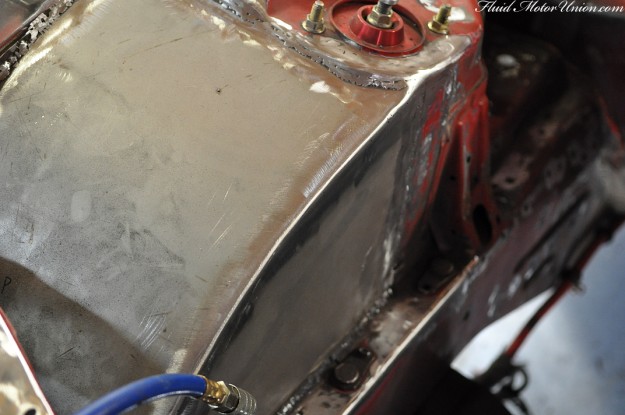 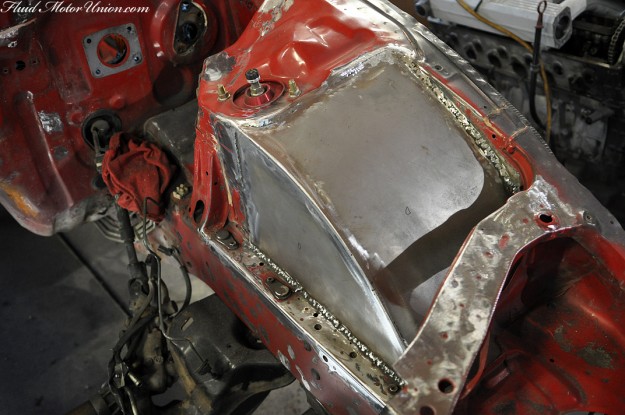 The engine’s obviously not in yet, as this is a small nighttime project that requires a significant amount of effort and work, but we’ll continue to update you as it moves along. It’s getting there! 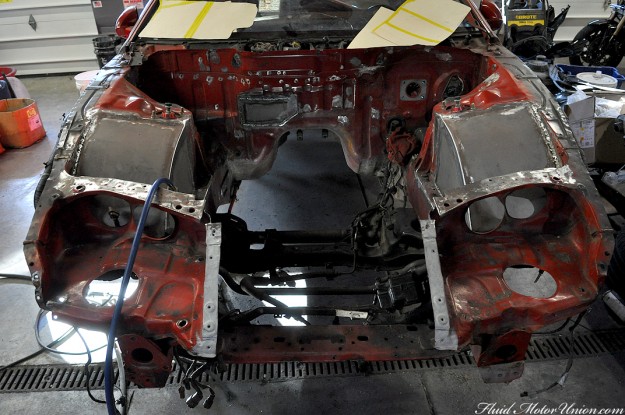 Over in the sound department, our fabrication wizards are currently putting together a bit of an exhaust retooling for a BMW already in the shop. The overall exhaust note came out a bit raspier and less refined than we wanted for the customer, so we’re going about swapping the old mufflers for our current E39 M5 Rear Section style. After cutting off the old mufflers, we set about preparing all our materials on the welding table prior to getting underway. 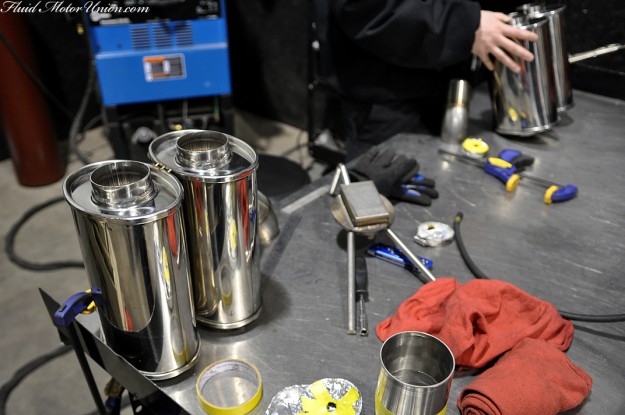 The exhaust, much like the FMU E39 M5 Rear Section, will incorporate a single exhaust pipe branching out into two individual pass-through resonators, with the tips coming off those resonators. So now we’re going about welding together our Y-pipes, which will mate together the existing and new parts of the exhaust. We won’t inundate you with weld photos, but we had to let one slip through the cracks. 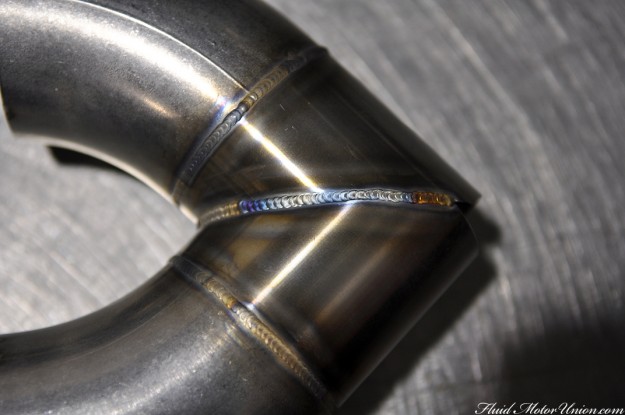 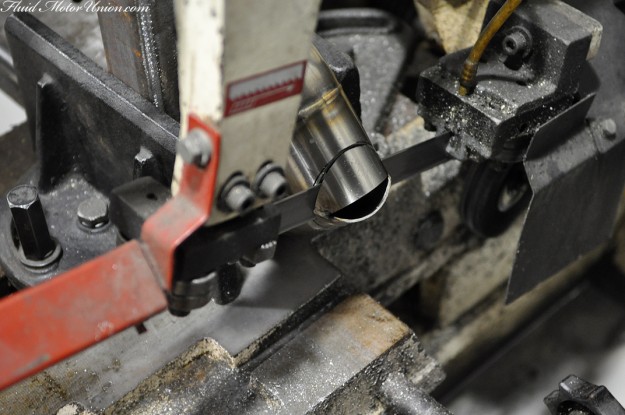 And that’s all she wrote to start off the week. We still have a couple projects unfolding in various Fluid departments, and we’ll make sure to keep you updated with everything as we continue through the week! Best of luck to those of you who haven’t had a full week of work since the previous calendar year — you can do it!