There are two distinct kinds of riding dirty in this post. One of them is good (sort of), and the other one is not good whatsoever.

Straying away from the typical definition of ‘riding dirty,’ instead we’re about to present a vehicle that, for all intents and purposes, is as dirty as it gets. And we mean that in a good way. This car has earned over 172,000 views on our YouTube channel, he’s made friends in every corner of the country, and he even earned a spot in Eurowerks’ car limbo this summer. Oh yes, we’re talking about Frame Bangin’ Fabel. 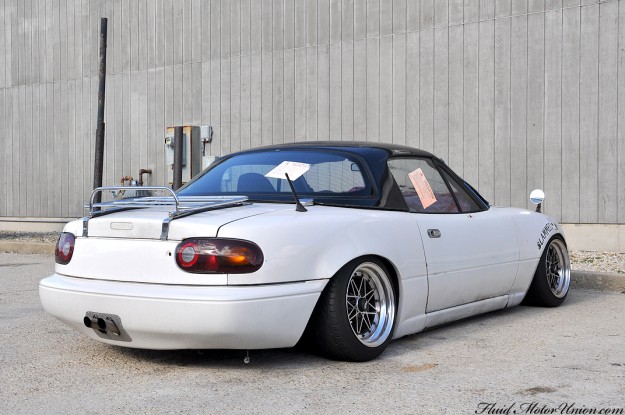 We can only assume that the towels on top of the dash are not for the purpose of bringing some color to a rather monochromatic aesthetic. Rather, they’re in place to soak up the moisture and rainwater that seeps through the plexiglass “windshield,” which has been repaired with pipe cleaners masquerading as medical sutures. 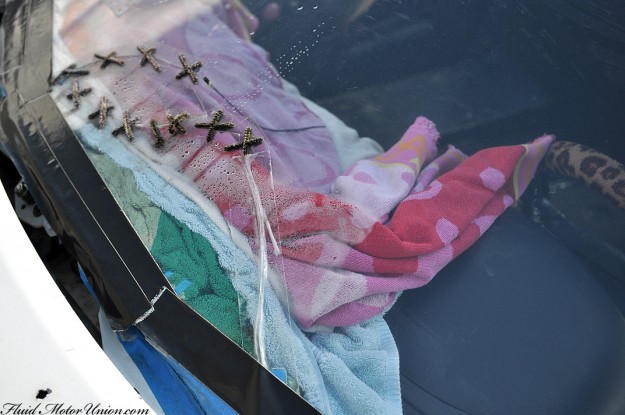 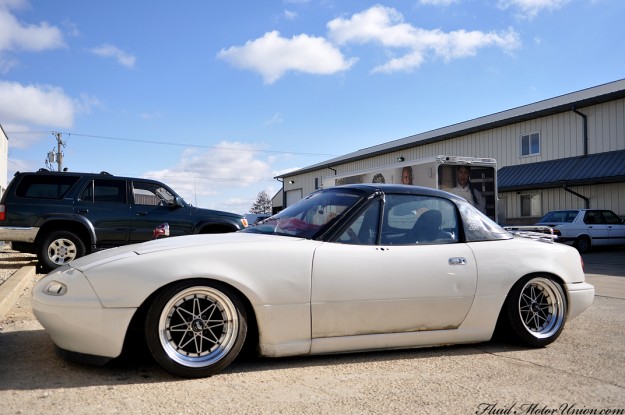 As always, the Work Equip 03s are in rather excellent shape, and his front passenger fender still rocks the “slammed” stencil, which is more than obvious by just, you know, looking at the damn thing. One of his googly eyes is still missing, which is probably the reason why he’s at the shop. We’re quite good at replacing errant googly eyes. 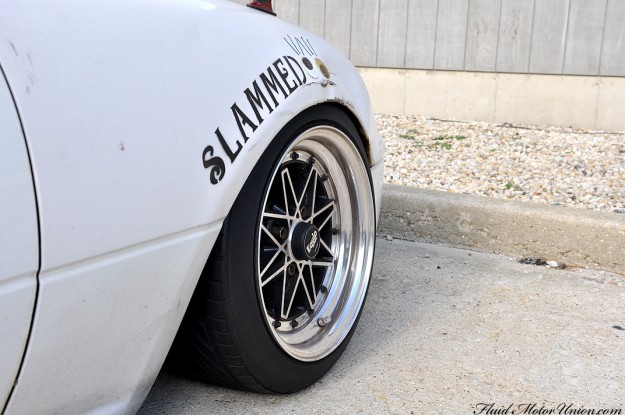 The piece of the car that caught your humble narrator’s eye is actually the newest upgrade to this vehicle. While we haven’t heard back from Miles to get the full story on it, from what we can gather, this car was at one point under the ownership of the fine gentlemen in the Elk Grove Village Police Department. As said narrator is also a current resident of Elk Grove Village, he can attest to the fact that there’s not really any serious crime in Elk Grove, therefore they must have been foaming at the mouth when a plateless Miata scraped its way into town. Seeing as how the town’s mayor was smart enough to spend upwards of seven figures on brick crosswalks that require extensive maintenance and repair twice a year, we can imagine that the sight of a Miata showering the road with sparks was enough to strike fear in their hearts. 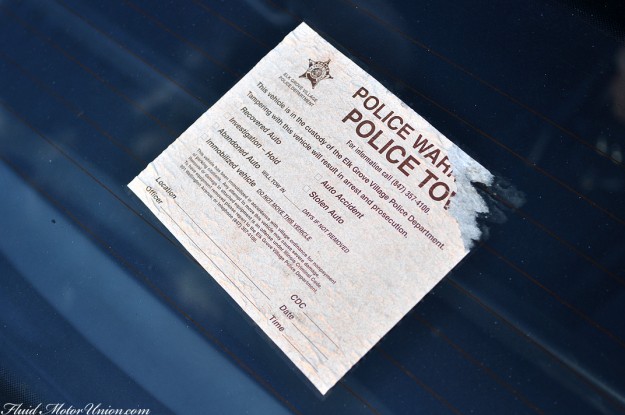 Now, let’s move to the “not good whatsoever” type of ridin’ dirty. As we’ve mentioned multiple times in the past, across several different blog posts, sticking to your oil change intervals is paramount in keeping your vehicle performing at its peak. If you start slacking on your oil changes, and you continue to drive your vehicle frequently, you will most likely end up with some very costly repairs. As oil breaks down over time and mixes with particulate from other places in the motor, gunk will begin to accumulate. This following picture is what we managed to scrape out of the (nearly clogged) oil pickup feed of a Volkswagen Beetle. For the record, this isn’t good, especially for the oil that’s about to go INTO your motor. 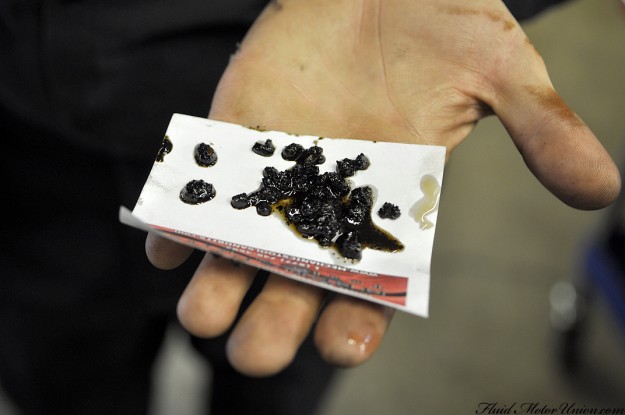 In other gunk-related carnage, we had a Saab roll through the shop last week, complaining of a ticking noise. A few hours later, we had the oil pan off and realized that the oil change intervals were not taking place when they should, resulting in a serious buildup of metal shavings and other particles that suggest the notion that the motor has already begun to eat itself alive. The screen and the pan were by far the dirtiest parts, with the screen almost totally clogged and plenty of metal shavings floating around in the pan. 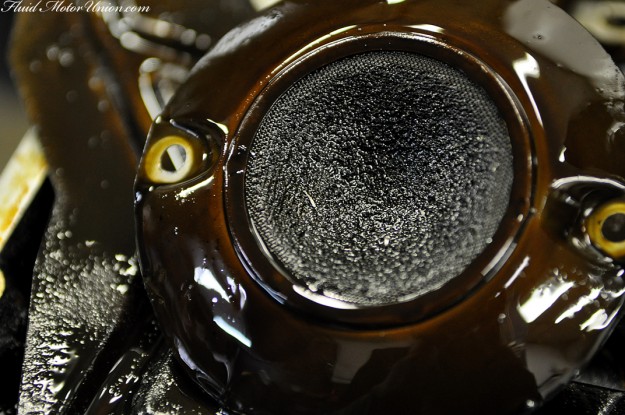 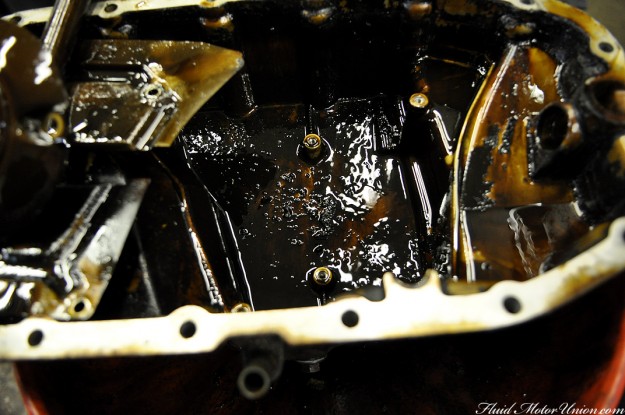 The walls of the block were also caked with gunk. So much so, in fact, that it took a concerted effort to remove even a slight bit of the gunk from the wall of the motor. This buildup has had some time to hang out, it seems. The oil that came from the filter was no better, turning the color of, well, incredibly old and overused oil. The filter itself was practically fused to the car, as well. While it may be too late for this motor to survive, yours will be in much better shape if you follow the intervals for oil changes as suggested by your manufacturer — most of the time. We’ve found that most motors with 15,000-mile oil change intervals will begin suffering from the effects of sludge just after the warranty expires, which is, of course, totally a coincidence. Totally. 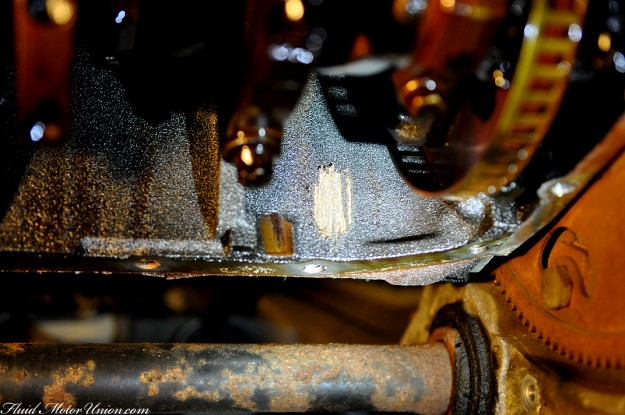 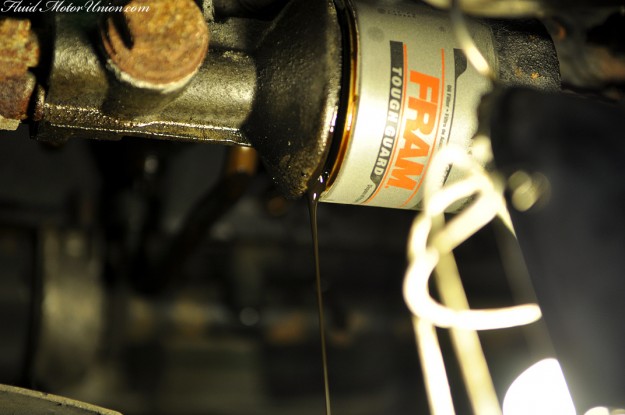 Have a great start to your week!