After about two and a half years writing blog post titles, pipe puns are harder and harder to come up with. Mail us your wittiest suggestions.

Today, after a weeklong break from it, we’ll be looking at Alex’s LS1-swapped blobeye Subaru WRX. Last time you saw it, we were starting the custom true dual exhaust with two pipes coming off each V-band clamp situated on the custom long-tube headers. We knew we wanted to remove some slight harshness from the exhaust note without creating flow constraints (such as mufflers), so we went and fabricated a good ol’ fashioned X-pipe to knock out some of the acoustical harshness. From there, it was just a matter of creating a connection between the headers and the X-pipe, using our best friend for fabrication mockup — yellow masking tape. 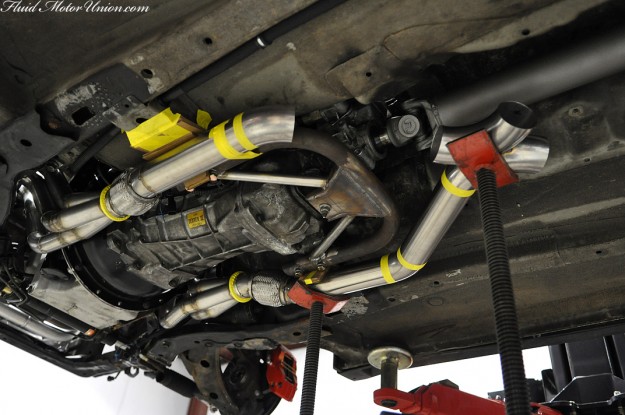 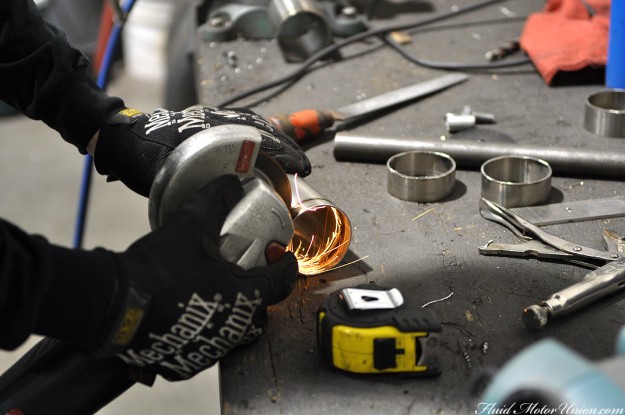 We also planned on utilizing two pass-through resonators directly after the X-pipe to further tone down any sort of rasp or drone that may occur. Seeing as how these are direct pass-through resonators that don’t slow down the exhaust gas velocity by much (if at all, and certainly less than traditional mufflers), we shouldn’t be sacrificing much if any power to refine the noise a bit. 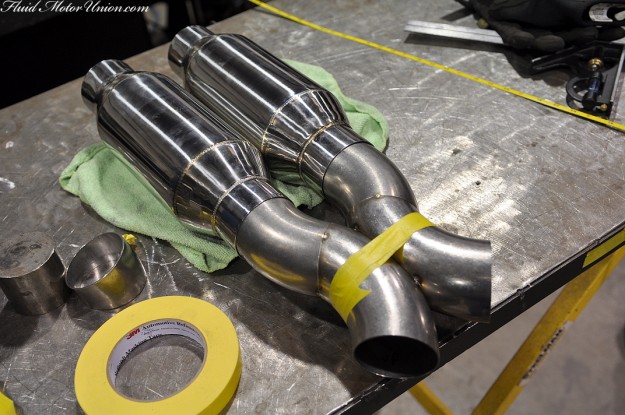 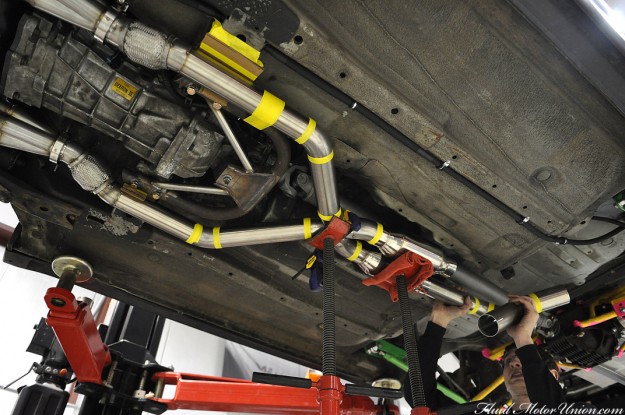 Now, when working on exhausts, the trick to keeping flow fast (and power high) is minimizing the number of bends in the pipe. After getting our exhaust mockup to this point, we looked at the piping thus far and realized we had two extraneous bends between the X-pipe and the resonators. You see, the resonators — when right next to each other as in the above pictures — are wider than your average pipe, so the exhaust piping needed to bow outwards a bit to mate up with the resonators. Thankfully, most everything was still taped at this point, so we fixed this issue by staggering the positioning of the resonators to allow for a straight shot out of the X-pipe. As you can tell in the second picture below, one resonator is much closer to the camera than the other — it’s a difference of maybe 3 inches, but it allows us to remove one potential constraint from the system. We also started tacking the further-up pieces of the exhaust at this time, as well. 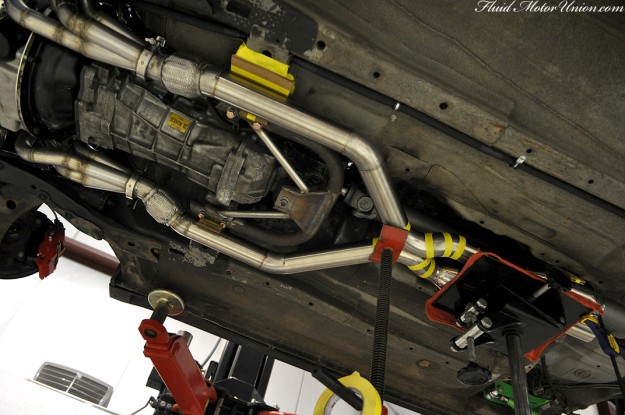 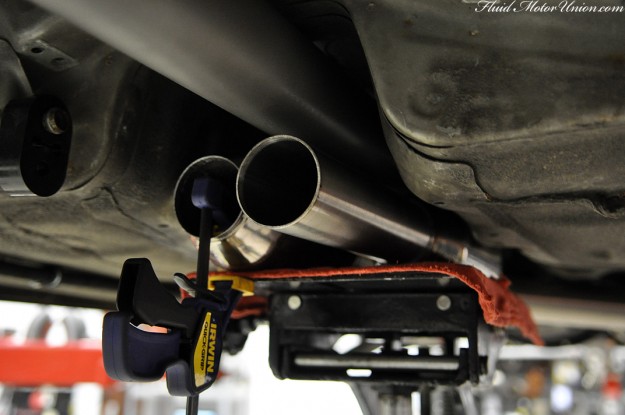 With the X-pipe issue settled, it was time to get some welding underway. We had two stretches of pipe going from the headers to the X-pipe, all tacked up and ready to accept a bit more filler rod, if you get our drift (we mean welding, pervs). Steady hands and slow pacing are the name of the welding game at Fluid MotorUnion. If you’re unfamiliar with the tube going into the exhaust, it’s piping a constant flow of inert noble gas through the exhaust, which stops the welds from oxidizing inside the pipe and creating restrictions that cut down airflow and overall power. 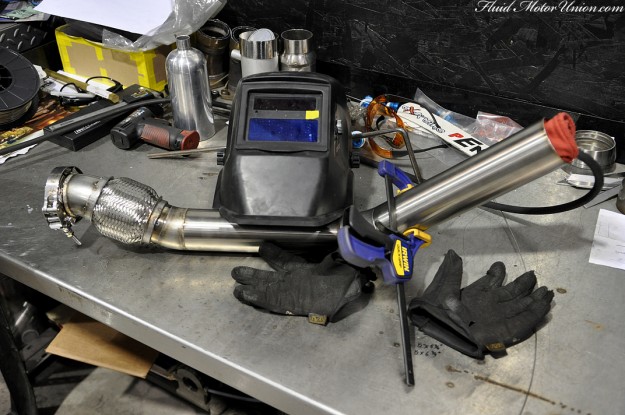 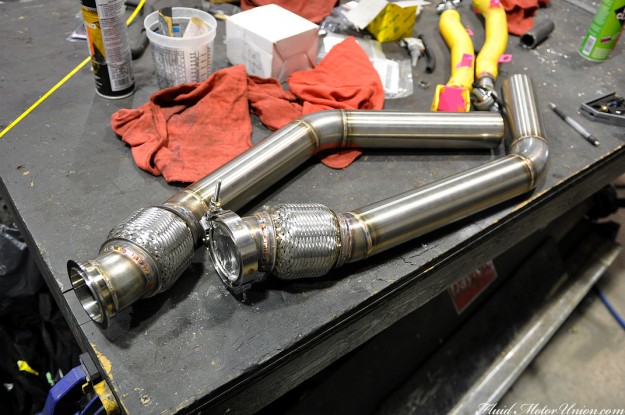 If you’ve seen the blog before, you know that we’re pretty proud of our welds, as our fabricators have spent countless thousands of hours perfecting their craft. However, we know you don’t like to get inundated with 15 pictures of metal being fused to other metal, so hopefully these two pictures will give you an idea as to the effort we put into this (and every) custom fabrication job at the shop. 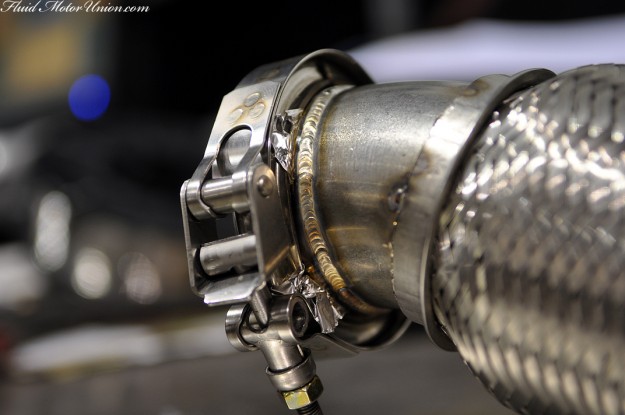 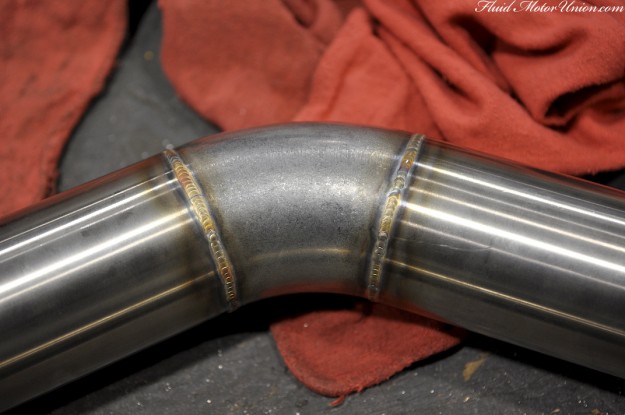 Of course, there’s plenty more exhaust to be made, as well as a few other things. For example, how exactly do we intend on hanging this exhaust from the underbody of the car? Well, next time we come back to this project, we’ll tell you all about it. However, at this very moment, we’ll let you know that we’ve thought of a couple good places to start. Have a great day! 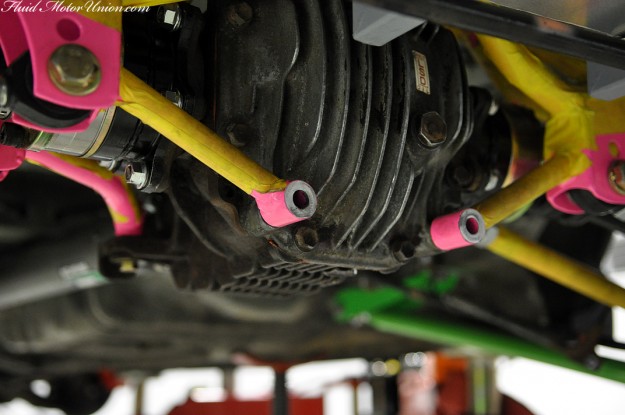