A while back, we showed you the first stage of our new Spies Hecker custom mixing station. Well, now our space station is fully operational.

Let’s give you an overview of how we make the necessary paint color, along with an example currently undergoing work in the paint booth. The first step is, well, being in the same room as all the equipment, which we’re still in the process of rearranging. 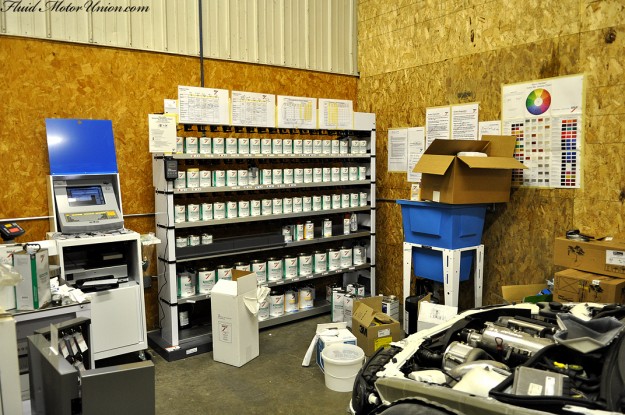 Just in case you have trouble remembering the specifics of how to go about the job at hand, Spies Hecker provided a large amount of wall-mounted documentation to take away some of the strain of remembering all that information. 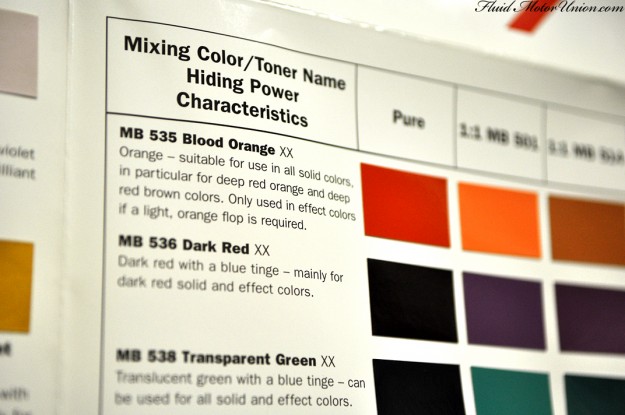 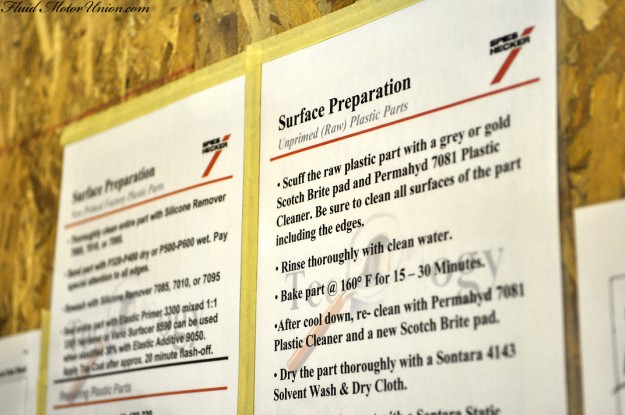 First, you’ll look up the specific paint code in the computer. From there, it will give you a list of tints to add into the mix to create that color. All of the tints will be lined up in the mixing shelf, which is programmed to mix the paint at various intervals throughout the day, resulting in a tint that never has issues with accuracy. 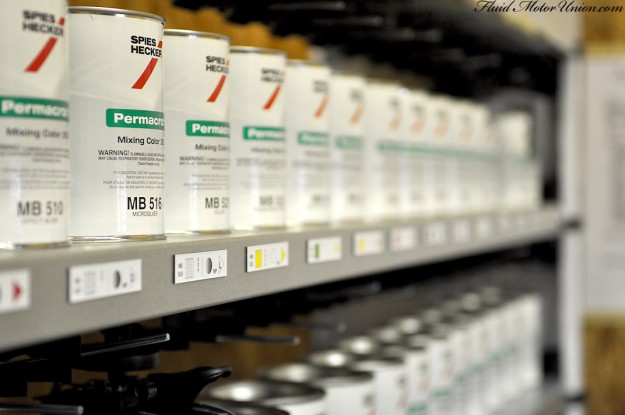 Once you’ve grabbed the necessary tints off the shelf, you’ll take them to the scale. The scale is connected to the computer, which tells you how much tint you’ll need to add to the base, down to the tenth of a gram. Each of the paint lids will have a special pouring spout that’s controlled with the spout’s handle, allowing you to add a tenth of a gram (or less) at a time. It’s surprisingly straightforward, once you get the hang of it. 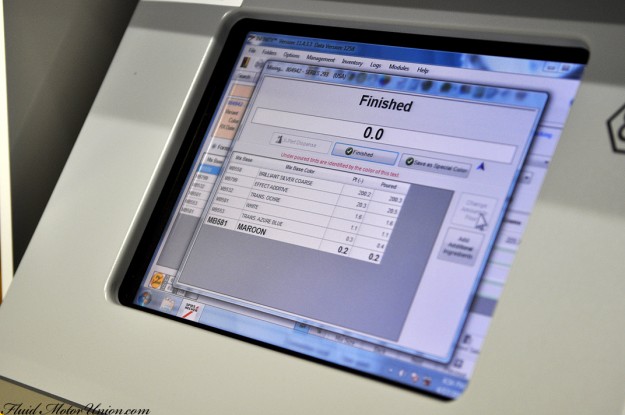 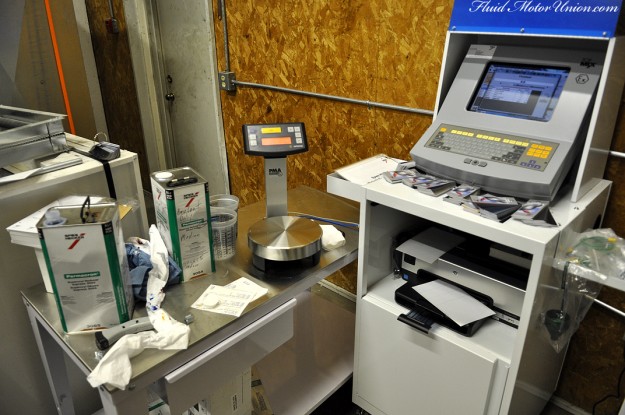 After your shade is properly mixed, it’s brought back to the paint shop and loaded into the paint gun. 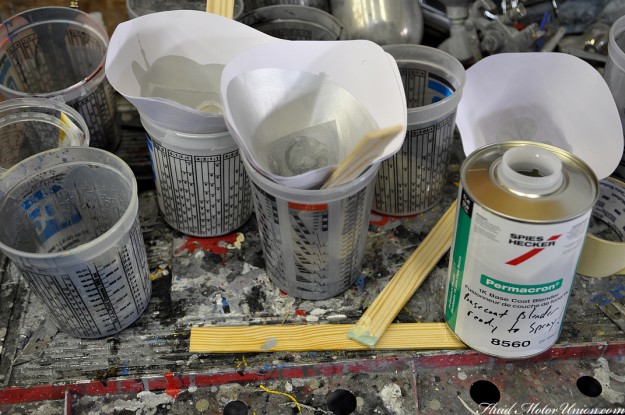 From there, the shade is applied to the body panel at the appropriate step in the painting process. Today, Jim’s Raptor is having its aftermarket fiberglass fender flares painted and blended into the door and hood. 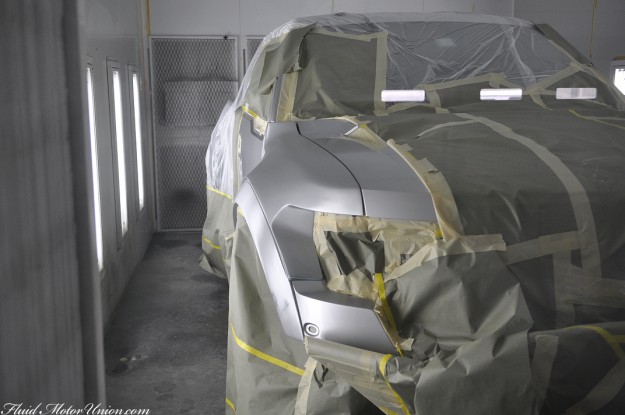 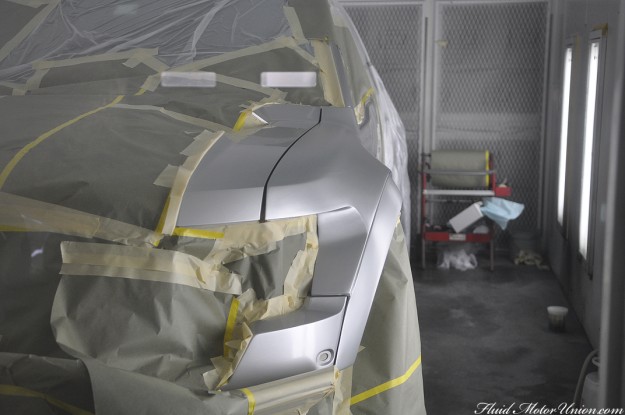 And from there it’s all down to the post-paint work. We also painted the edges of the fenders in the same color as the old fenders, which had a plastic attachment at the end. These fiberglass fenders don’t have that same plastic attachment, but we still wanted them to match. We’re currently putting all the exterior parts back on to the vehicle, so we don’t have a finished shot for you quite yet. 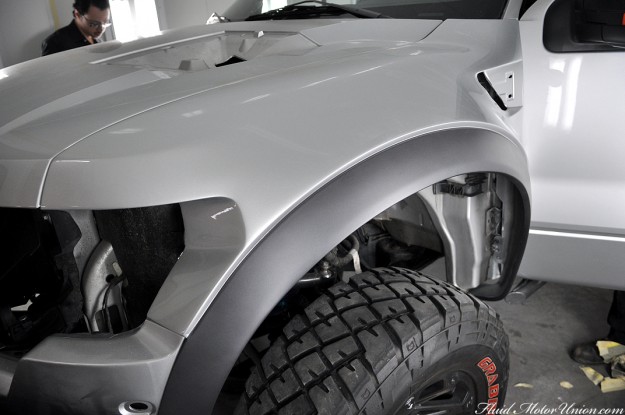 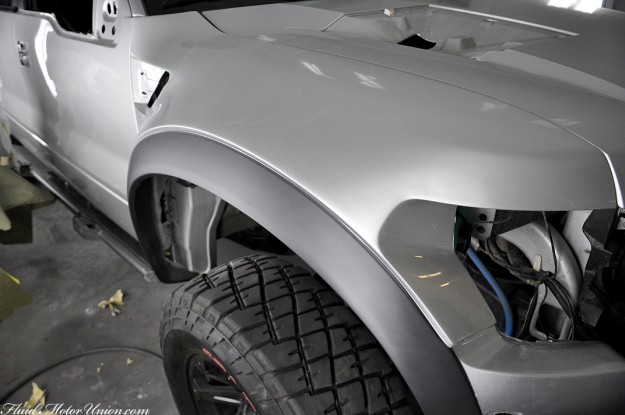 While it’s being finished, we’re also constructing some aluminum under-fender covers, to prevent any unnecessary items being kicked up into the wheel wells during the Raptor’s upcoming rally. 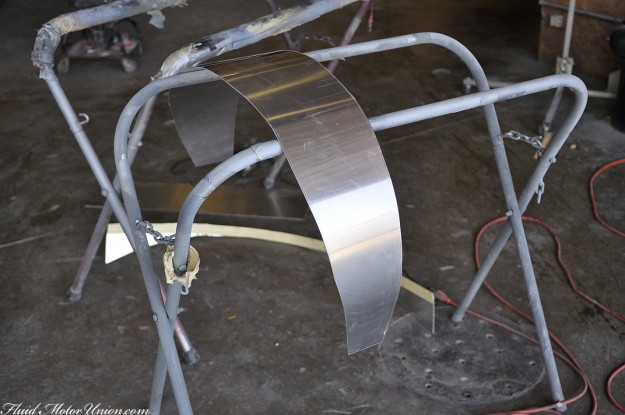 The Raptor will be heading to California this week for the aforementioned rally, and we are excited to see the truck in action. He’ll be installing the King-Blue-anodized wheel bolts out in California, since the Raptor will be a grand total of 9 miles from King’s factory in Garden Grove. Hopefully there will be some sick shots from the rally that we’ll be able to post up here afterwards!