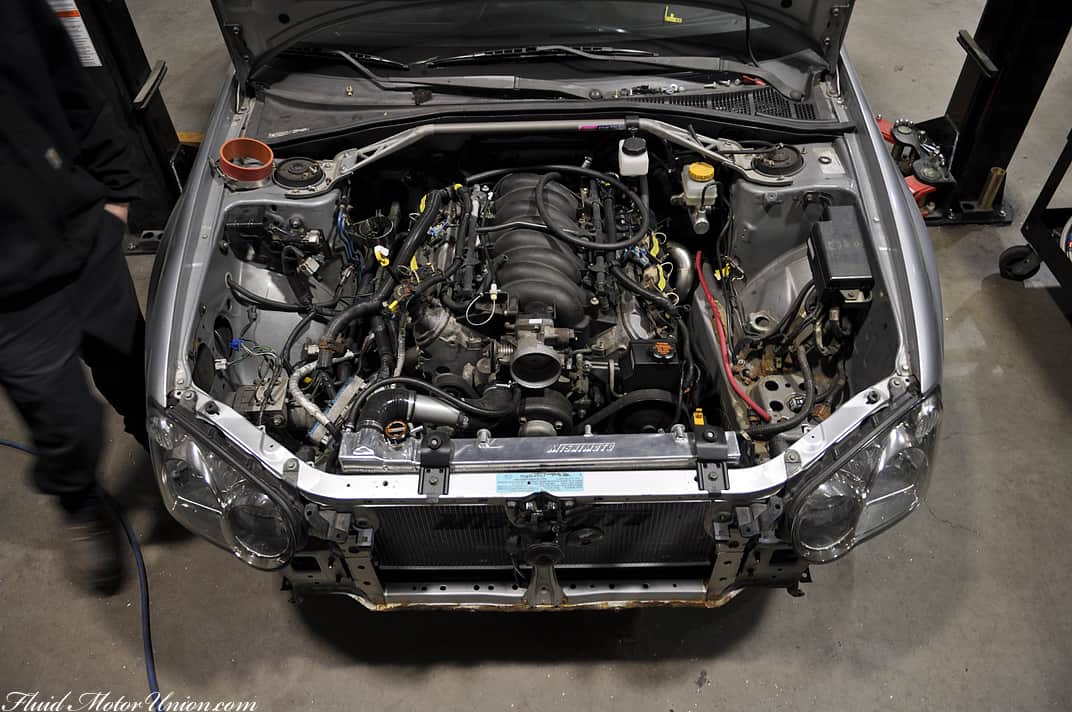 They’re not necessarily odd, but they are some small parts of the LS1 WRX Subaru that we thought deserved blog coverage.

First up this week, we came to the realization that we had never shown a picture of the full engine bay of our LS1 WRX. This needs to change; seeing as how the main point of the build is that there’s a freakin’ V8 replacing a flat four motor, that part of the job should be shown off as much as any other piece of the build. Therefore, here’s your first full-on shot of the engine bay. The harness components on the passenger side still need to be routed and wired up, but the placement of the motor is exactly how it should be, according to the subframe and mounts that came to the shop with the car. Quite a lovely sight, isn’t it? 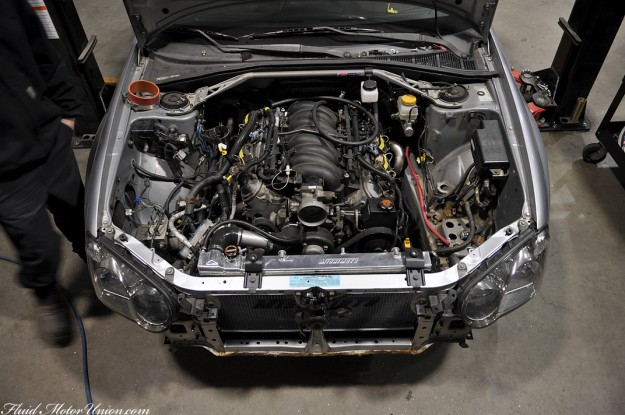 Next up, we showed you the beginnings of the oil catch can from last week. This catch can will operate using vacuum provided by the exhaust; with the way this can is wired into the car, the flow of exhaust gas through the exhaust piping will create a slight vacuum in the crankcase system, pulling the oily vapor through the catch can. Before this could happen, though, we needed to finish the catch can. After changing the positioning of the venturi fitting to the side of the can, we welded everything together. Prior to paint, since we wanted a single-piece look to the can, we sanded down all the fully penetrating welds so that the exterior looks as we want it to. After taping off the ports, we painted it and the mount as well, and then replaced them in the car once dry. Black isn’t the easiest color to photograph in a dark engine bay. 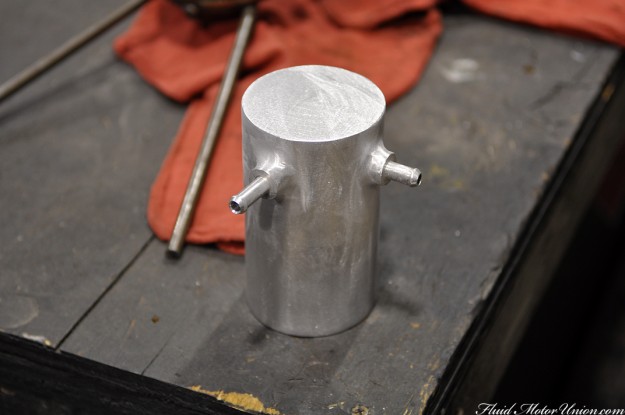 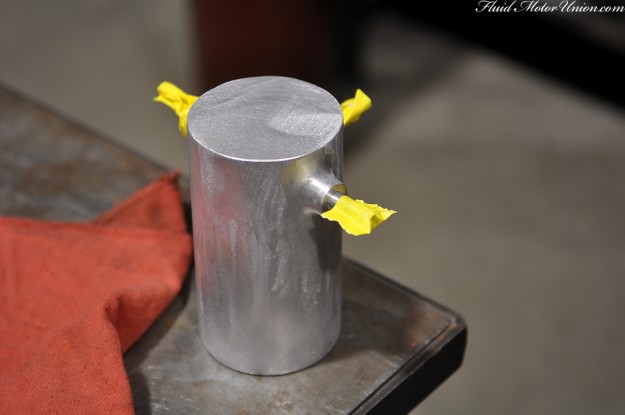 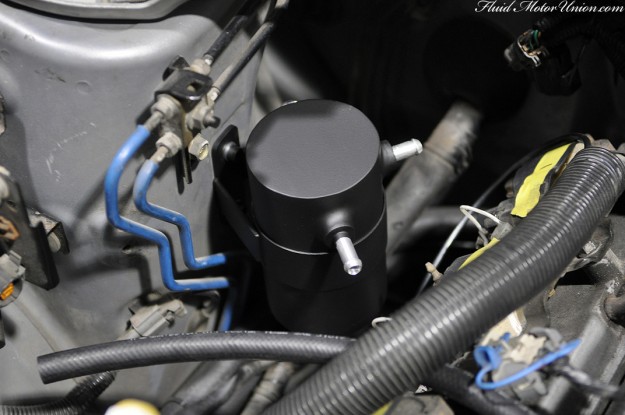 As we mentioned in our description of the WRX’s catch can, it would use vacuum provided by the exhaust gas. However, as the exhaust was built, there was no port off which to attach the catch can. No problem, as we found a spot right near the frontmost exhaust hanger; a few passes with a drill to bore out the correct size is all it took to get us access to the necessary area, and it was as simple as replacing that hole with the correct fittings for the catch can tubing. It’s not welded up in the second picture, but as you can see it’s oriented at an angle to the exhaust gas, which is necessary to create that vacuum. 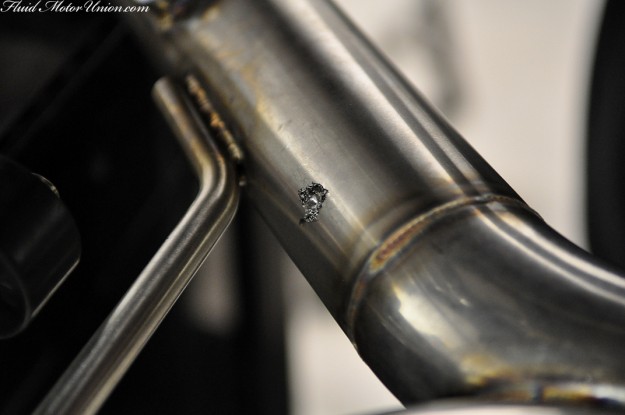 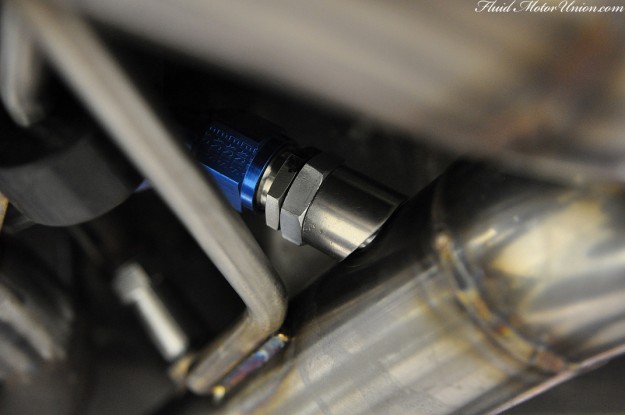 Finally, we’re reaching the “ends” portion of the title, as we have one final segment of the exhaust to put together — the tips! The owner has decided on his specific tip preference, and now it’s our job to make that dream a reality. We’re creating a mockup for the tips right now, using our best friend – masking tape. Once the position of all the metal is finalized, we’ll tack the taped pieces and then begin welding. And, as you might imagine, we’ll have that for you right here on the FMU blog. 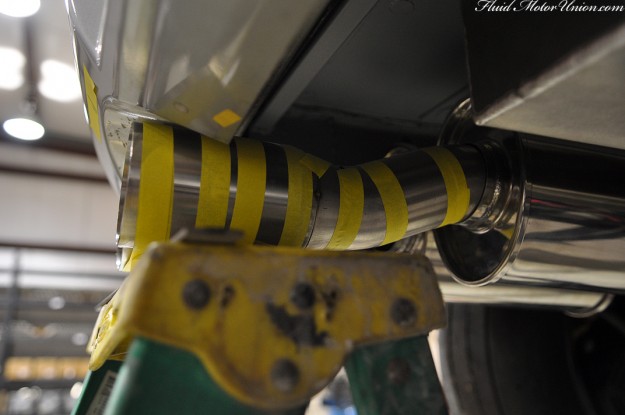 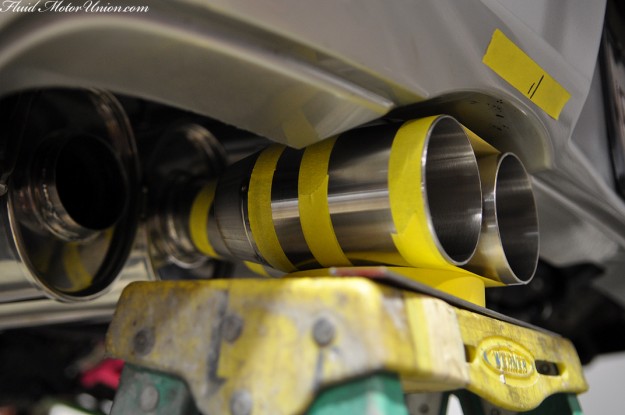 Finally, our fabrication department’s ears were given another V10 treat this weekend, as a customer’s E60 M5 was up on our Dyno Dynamics dyno for a custom ECU tune. It might not be as loud as Ken’s M5, which we featured on Friday, but it’s certainly one exhaust note that never gets boring. 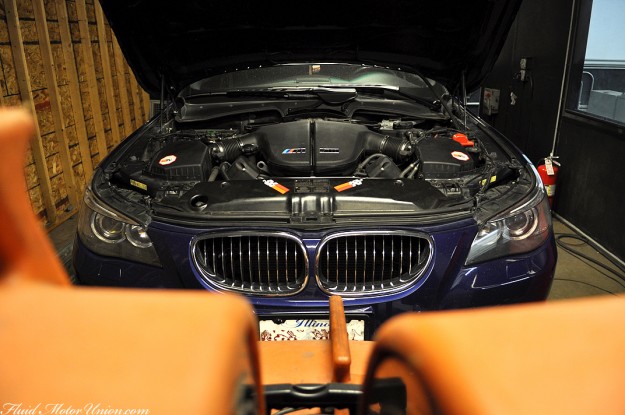 Have a great start to your week! We’ll be right back here tomorrow with some Lamborghini pictures for you!