We’re not laying claim to dominate any sort of category in the blog post’s title. The Accent just happens to be lower than it was before, that’s all.

First, to finish off what we ended with on Monday, we finished installing the air struts on all four corners. This was probably the easiest part of the entire install, as the bolts are easily accessible and weren’t too badly covered in rust, which is a problem with many import vehicles regardless of age. 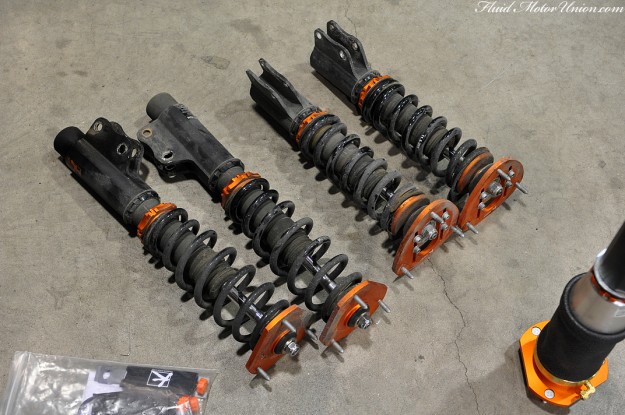 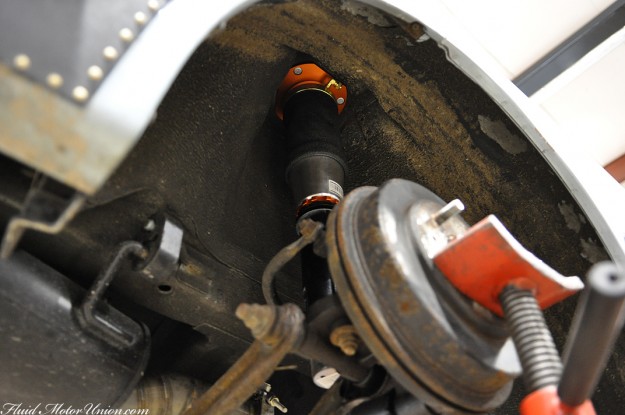 With that part out of the way, we set about lowering the car onto some tires to see exactly how low the Accent will be when it’s aired out. The answer is pretty damn low. There’s significant wheel tuck in the rear, and a little bit in the front (the wheel arches aren’t the same height on this car, nor are they on many other models also). This is with the air struts spun all the way down, as well. Did we happen to mention that Ksport’s Accent air struts are also height adjustable and have a choice of adjustable damper settings? In short, Dan’s got a serious kit on his hands here. Either way, the car was lowered on tires because it’s much easier than lowering it onto the ground; with the ground, we’d have to remove the arms of the lift from underneath the car, requiring the flattest jack we have and more time than is necessary to spend. Therefore, the tires. Bear in mind this is the aired-down height of the car, not its driving height. 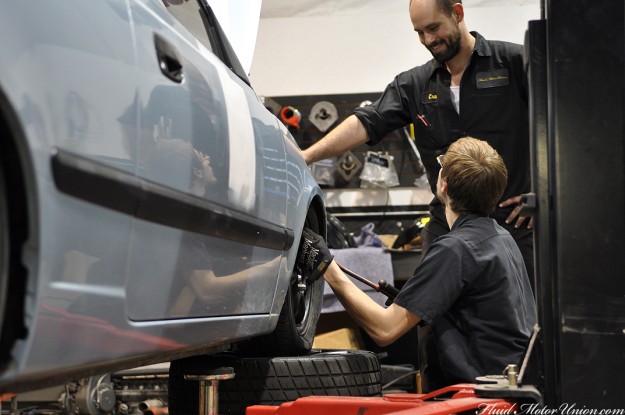 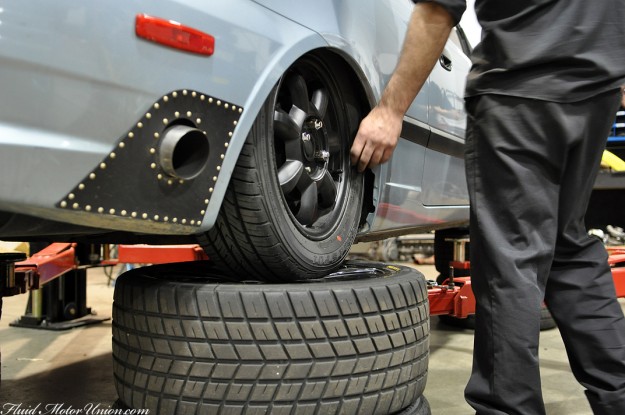 With the vehicle looking pretty damn decent at the current height (we’ll probably end up getting it a little lower up front, which we’ll talk about in a future blog post), it was time to start installing the level sensors in the rear of the car. Attaching the sensor itself was a piece of cake, as there are plenty of flat spaces free of moving parts in the rear wheel wells. Attaching the level sensor’s arm to the Accent’s control arm was a little trickier, but a quickly fabricated adapter proved to be the ticket. 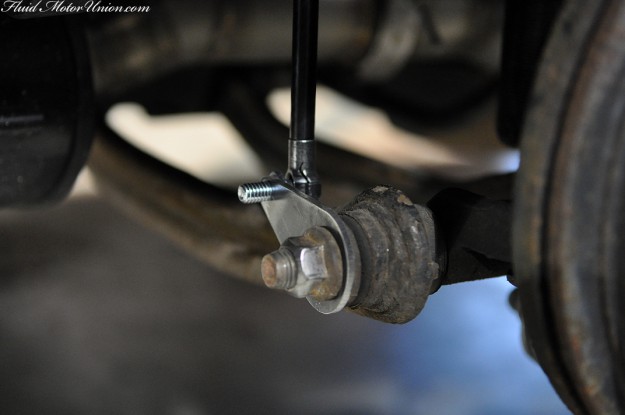 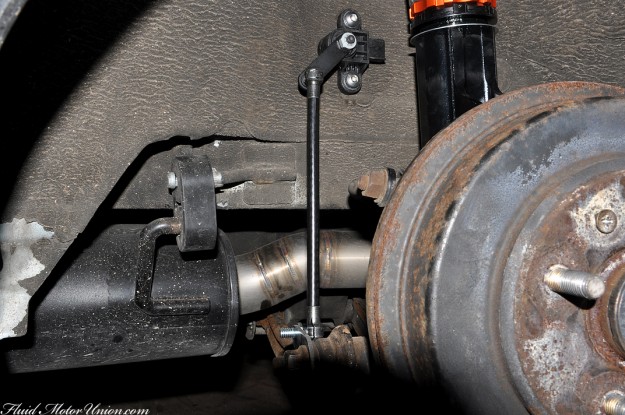 While the rear sensors were being installed, we went about tackling another issue that Dan had brought to us. You see, part of being low means tucking the exhaust in special ways so that you don’t scrape it constantly. For Dan, this meant routing the tip through a side cutout in the bumper. However, directly above that exhaust port is a small vent that leads to an area behind the carpet in the trunk (it’s on both sides of the trunk, actually). This led to a little bit of exhaust leakage up through that vent. Since we’re not in the business of poisoning our customers, we figured we’d remedy this with a patch. The first step was to remove the plastic shroud around the vent, exposing all the metal. From there, we welded a plate over that vent and used the grinder to smooth out the welds. 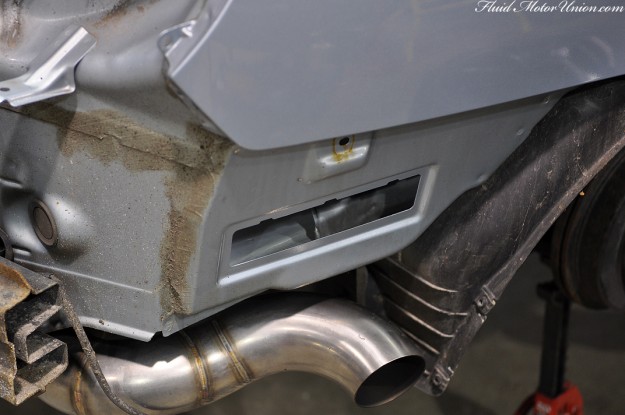 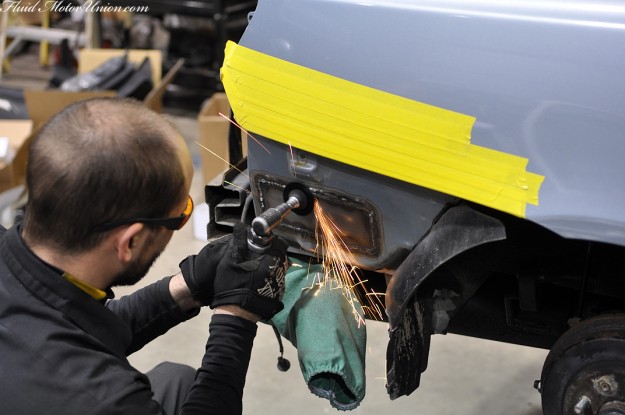 Seeing as how it wasn’t a small patch, it took a couple passes to finish off the smoothing process. After sparks-a-plenty went flying all about (hence the welding glove covering the exhaust pipe and the tape on the body), the area was smoothed down. We then covered the offending area with a coat of paint to prevent rusting and all those fun side effects of metal oxidization. This spot won’t ever be seen unless the bumper is removed, but it never hurts that the primer is roughly equal in color to other parts of the car’s body. The last shot is also another good example of exactly how much wheel tuck the rear currently has. It’s not a little bit, and Miata daisies aren’t exactly large wheels, either. 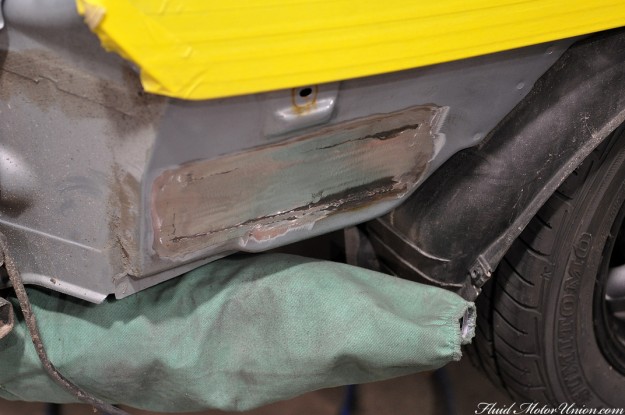 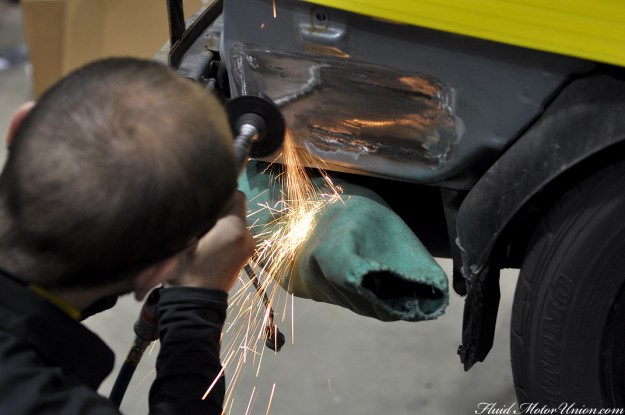 That’s it for today’s look at the goings on with Dan’s Accent. We’ve got more WRX and Accent content coming up, so stick around, we like having you here. You’re pretty easy on the eyes.