Yes, the diminutive daily driver has returned to the Fluid MotorUnion campus, unsatisfied with being a whole 2 inches off the ground.

You see, Dan loves his Accent, and he loves how low it is. Truth be told, so do we; it’s a platform that isn’t used very often, and we feel that Dan’s really making a great personal car out of this spry little Korean whip. However, the city of Chicago is where this car normally resides. If you’ve ever driven a slammed static car around the streets of Chicago (specifically the Loop, River West and River North neighborhoods), you may know exactly how shitty that can get. Knowing that there was a way to satisfy his demands for ultimate lowness while still commanding a vehicle that won’t automatically catch on a pothole (of which there are many), Dan decided to roll back to FMU for a serious upgrade to his suspension. 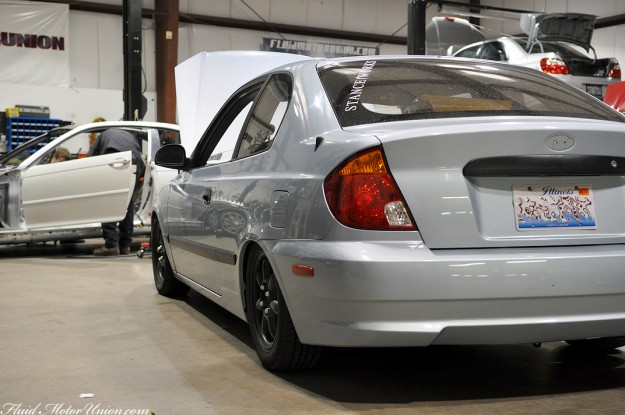 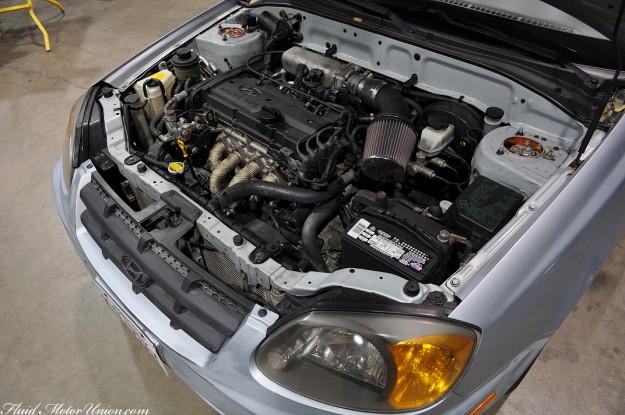 His upgrade is going to be a largely custom affair, but there’s two companies that will be providing the parts for this oft overlooked platform. The first is AccuAir. Dan’s been a big fan of AccuAir’s work thus far in the management arena for air-based systems; truth be told, we’re huge fans too, and consider their parts to be the best in the industry at the moment, especially with the forthcoming release of their smartphone-based eLevel management app. So management wasn’t really tough to figure out for this car. The shocks, however, were a bit trickier. No quality shops that we could find were making dedicated airbag setups for Dan’s Accent…until we happened upon a small corner of Ksport’s site. The Korean-heavy aftermarket parts manufacturer actually sells an entire air setup for that generation of Accent. After a quick call to Ksport, they said the struts alone will work with other management systems, so we order the struts from Ksport. Several weeks later, we were greeted with some freshly-built air struts. And boy, do they look fancy. 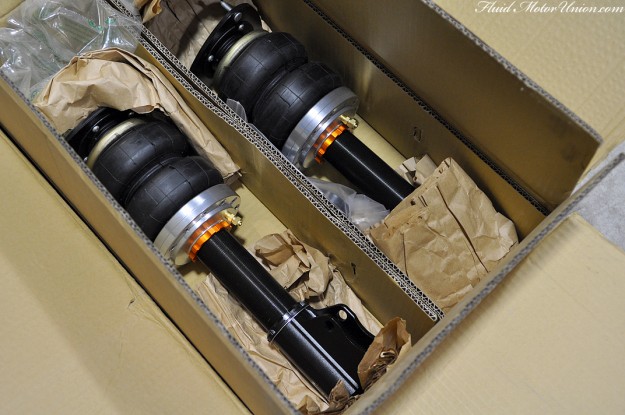 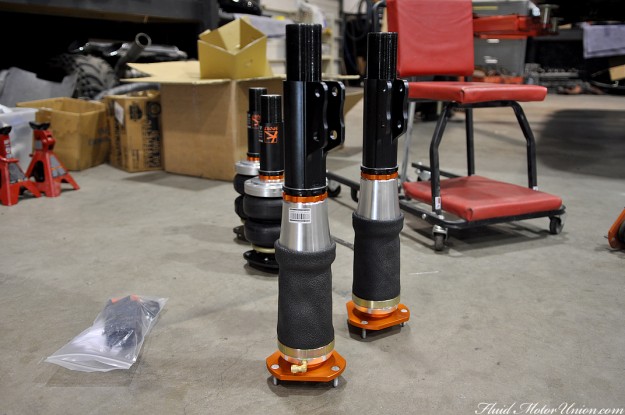 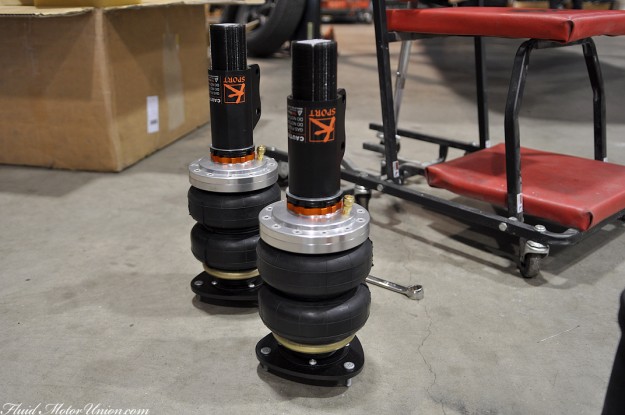 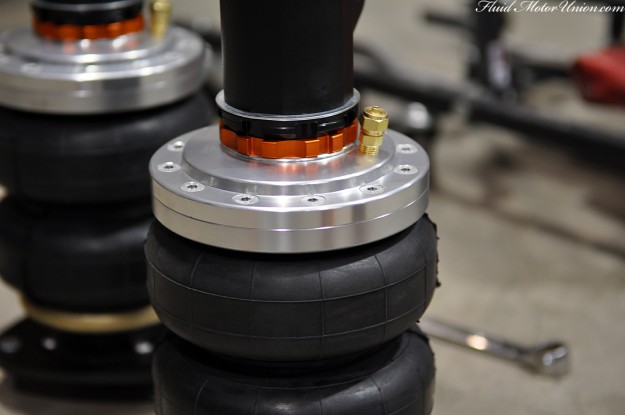 Now, the first part of the build will consist of removing the parts we don’t want, and installing the ones we do. For today, that means removing the old Ksport coilovers and installing the new Ksport air struts. Thankfully, the bolts weren’t completely rusted through, so removing wasn’t as difficult as we’ve seen on other imported vehicles around the same age. A little bit of elbow grease and the old ones slipped right out. 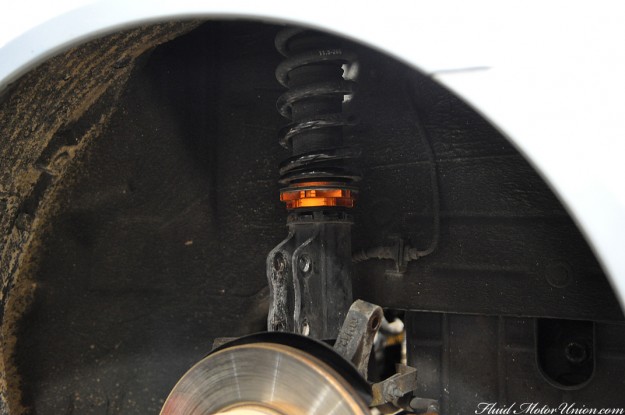 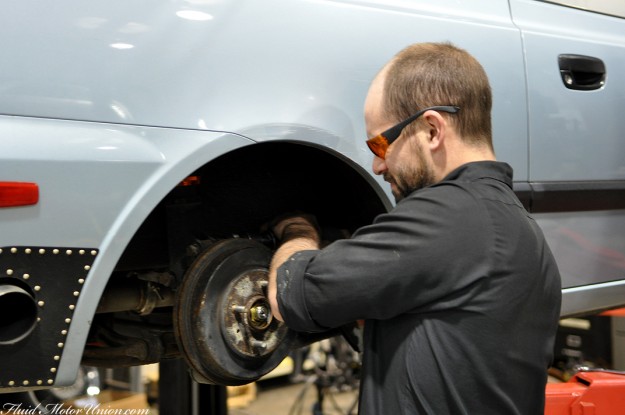 After applying even more elbow grease (we go through a lot of this stuff — anybody know a wholesaler?), we installed the air struts on all four corners. With the coils spun to the extreme (meaning the lowest the car will be), the suspension droop is wholly nonexistent. Hell, it even looks lower with that setup than it did on the straight coilover system. And it’s in the air, to boot. 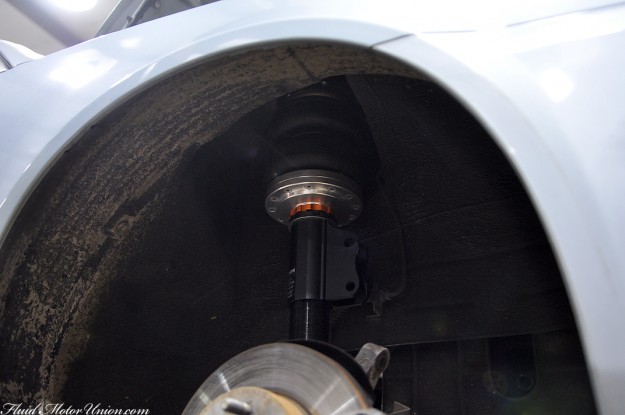 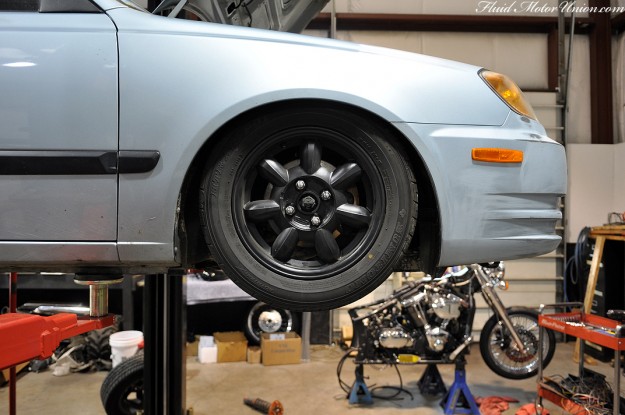 We’re currently finishing up installing the air struts. This is only the first step, and thankfully it’s probably the least picturesque step in the entire process, so the excitement will be heading towards the sky as we continue to bring Dan’s Accent towards the pavement. The AccuAir chapter of Little Car, Big Drop is on the way, so stay tuned and have a great week to come! 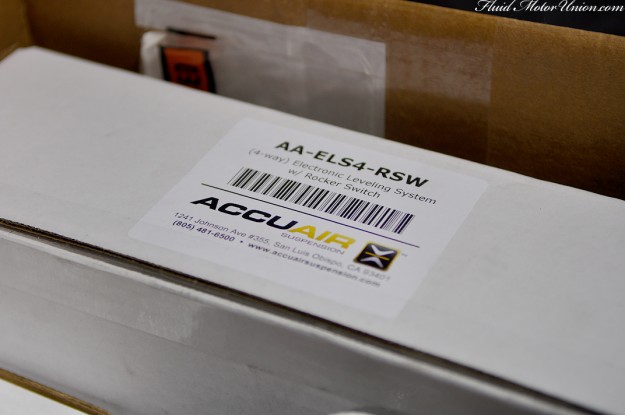