Lamborghini Battery Light- What the red warning symbol means on a Countach.

18 Sep Lamborghini Battery Light- What the red warning symbol means on a Countach.

Posted at 13:03h in Blog, Education Station, How to Guides and Common Vehicle Issues by fluidmotorunion 0 Comments
0 Likes
Share

A slow crank after the key is turned and suddenly, you notice a red light shaped like a battery. What does it mean?  Do you need a new battery? Well, if you were having trouble getting your vehicle started, most people would assume a bad battery. But the Mechanics here at Fluid MotorUnion know that this is most often not the case.  The most common culprit for a Lamborghini battery light turning on is the alternator not charging the battery. But what one is faulty, the battery or the alternator? How do you know if one or both are bad? 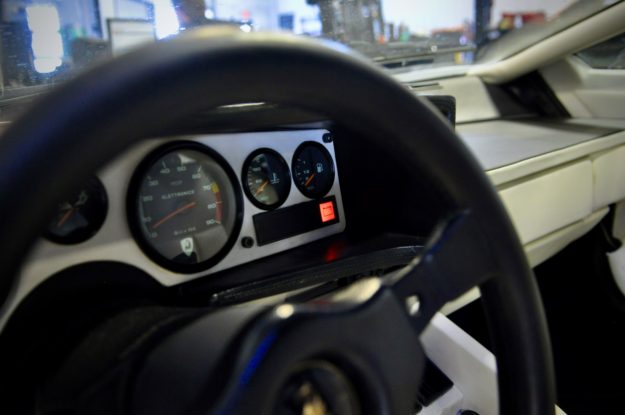 What does the Lamborghini Battery Light mean when it comes on and who can fix it? 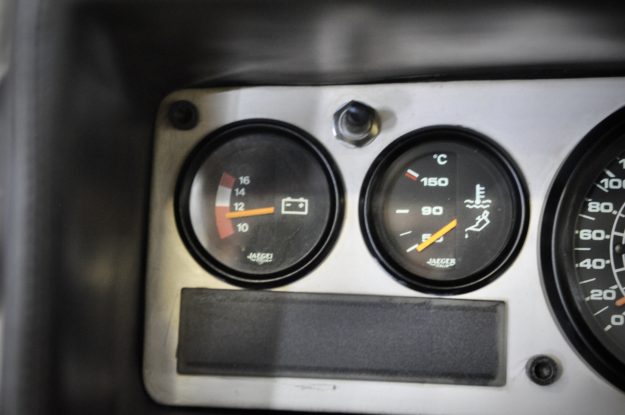 The correct voltage should be 13-14 with the vehicle running. Fluid MotorUnion in Naperville can help you keep your Lamborghini Battery Light off! 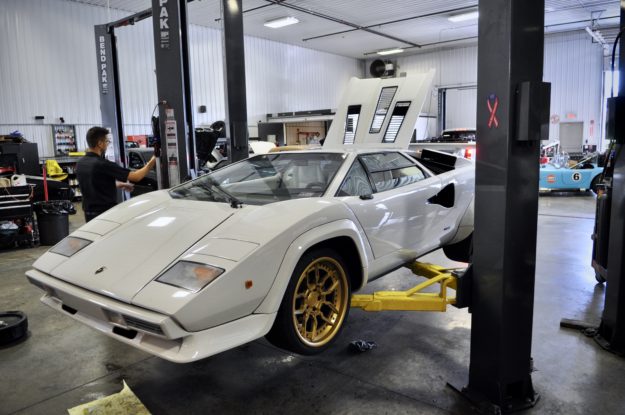 Alternator replacement requires the belt to be removed, so the car is put on the lift so our mechanics can get better access to the Lamborghini Countach’s tensioner.

A battery supplies a stored current to the starter motor when the key is turned. This starter motor is supplied enough energy to turn over the engine a few times until the combustion process takes over and can start making its own electrical energy to put back into the battery. An alternator is an electric generator that transforms mechanical energy from the belt drive of the engine into electrical energy. This electrical energy is used to charge up the battery while you are driving, supply all of the engine’s electronic components as well as a power many of the interior and exterior accessories your vehicle has. Car batteries typically only have a life expectancy of 3-5 years but it depends on use. Alternators can usually last a little longer, but this heavily depends on how the vehicle is used.

If your engine is slow to crank, starts inconsistently, or the car won’t start at all, then that would be a sign for us to check for a low battery charge. If all the cells inside the battery are okay then jump-starting the vehicle should allow the car to fire to life and allow the alternator to begin the process that charges up the battery. However, there are lots of other factors that could contribute to a battery dying and causing starting issues. Damaged battery terminals, a fuse, a parasitic draw, or loose ground wire somewhere can cause a dead battery. But only a bad alternator will keep the battery from charging back up. 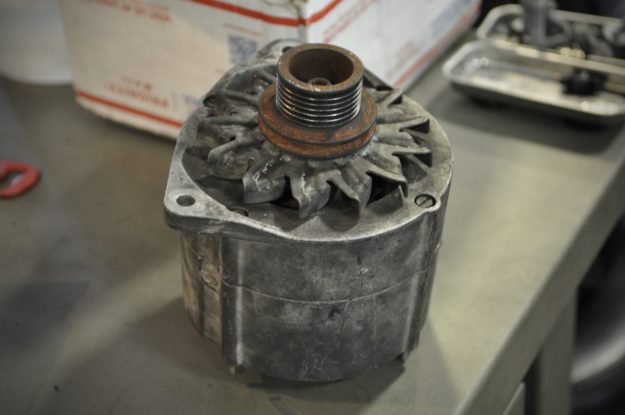 If the Lamborghini Battery Light is on in your Countach, the Mechanics at Fluid MotorUnion can find out what’s wrong.

While the symptoms of a bad alternator sound like they may be similar to those of a bad battery, there are some key differences. Some things that would suggest a bad alternator would be: your lights or stereo are dimming or fading in and out while the vehicle is already running, your vehicle stalls while you are driving, a squealing sound that gets louder when you turn on the radio or heater

If you suspect your alternator is faulty, an easy way to get an idea on the alternator is to grab a DC multimeter, turn on the car, and attach the corresponding sides to the correct side of the battery terminals. Fully charged automotive batteries should measure above 12.6 volts. When the car is running you should see a value between 13.7-14.7 volts. This extra 1-2 volts above the 12.6 volts is due the current supplied by the alternator to charge your battery while the car is running. If you are not seeing this additional current represented on your multimeter, then your battery is not being charged. This is in fact the biggest reason the battery light can trigger, no charging voltage from the alternator. Very rarely will the battery be the only reason the battery light is on.  As you can see below, this Lamborghini Battery Light was triggered because the system was only reading 12.15 volts while running, signifying more testing would be necessary, but would probably a new alternator. 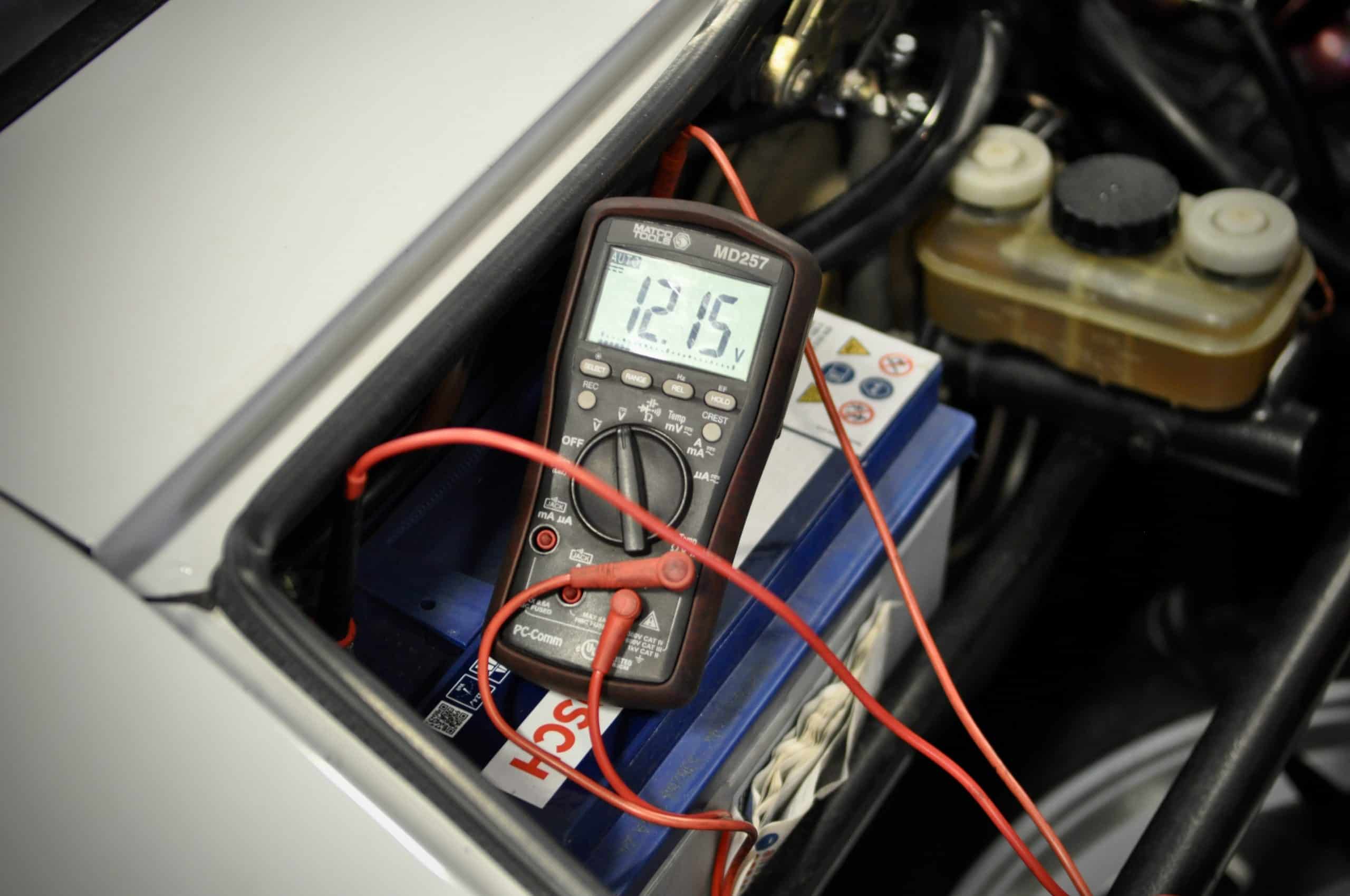 A Lamborghini Battery Light on your dash can come on for a number of reasons. So if you see it on or your car won’t start, then we can help you! We have been providing above satisfactory service to the Naperville, Wheaton, Winfield, West Chicago, Geneva, Batavia, Aurora, Plainfield, and surrounding areas since 2008.

To stay connected with the team, and find out about cool events here at FMU and the other businesses at the Iron Gate Motor Plaza, check out our Facebook page