And once again, we return with an installment of Hell On (Two) Wheels, our quest to create the most unique Kawasaki Vulcan 2000 on the planet.

As we’ve mentioned before, we’re in the process of installing a custom 300-wide rear tire on this Vulcan. Now, obviously the rear wheel will be changing with the rest of the rear end, as Kawasaki’s OEM rear wheels aren’t wide enough to install a 300 rear tire. The wheel we’re utilizing is a multi-spoke design from DNA wheels, maker of custom Harley wheels. Since the owner eventually realized that attempting to match the OEM front to the DNA rear would be impossible (aside from just the color-matching), as they’re two very different looking wheels, he decided to see if we could utilize a DNA wheel up front as well. After many phone calls, we learned it would be possible, with a few modifications. First, we sent the front axle out to the same fabricator who made the rear end, so that it could be turned down to accept a narrowglide-sized wheel. From there, we also picked up a set of Harley front brake discs that should still fit nicely inside the OEM Tokico calipers. And obviously, we had the fabricator order the wheel from DNA, also; it’s the exact same style of wheel, so it will match perfectly. The first parts to arrive were the rotors, followed shortly thereafter by the wheel itself. 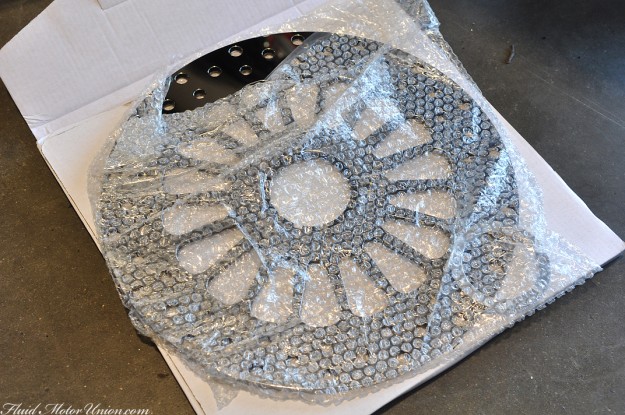 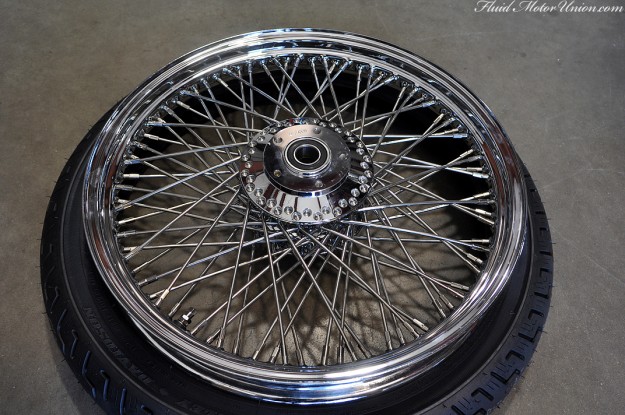 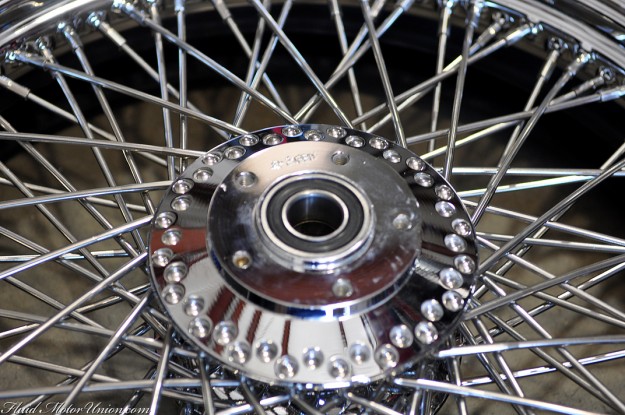 Now that the wheel arrived, we threw it onto the turned-down axle to make sure it fit. And it did! So we took the wheel and new Avon tire down to our friends at Willy World Cycles in Joliet to get mounted up. We don’t have the capability to mount the front tire ourselves, and rather than fudge around with it and waste time, we ate the cost and mated wheel to tire the correct way. 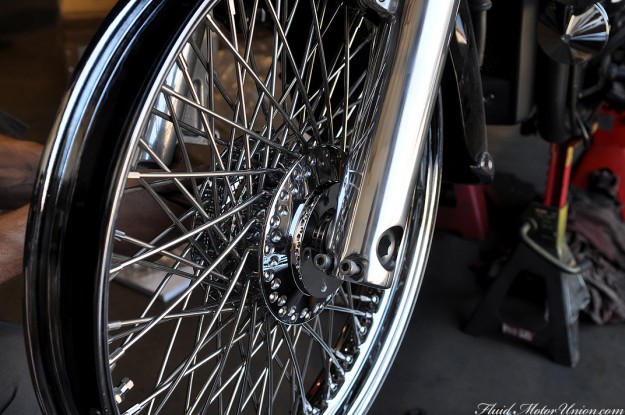 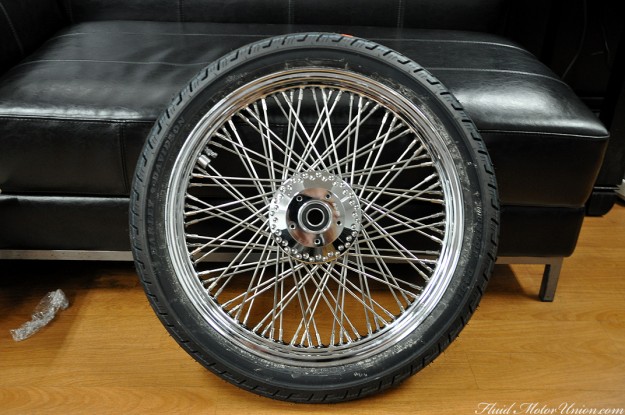 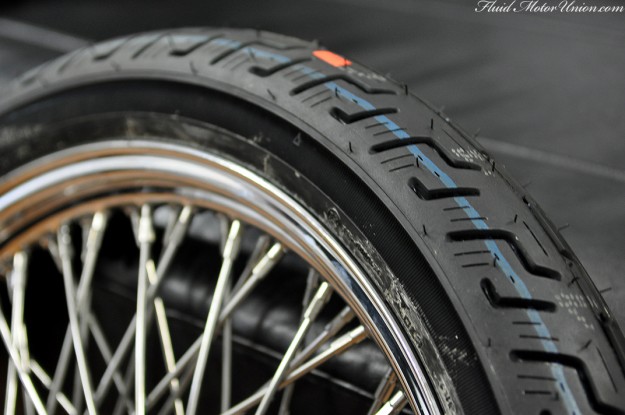 With our freshly inflated tire on the wheel, we bolted the wheel into place on the front axle, and attached the brake rotors, as well. The brake rotors are located a bit away from where the OEM ones rested, so we’re devising a fix for it that will still allow the OEM calipers to function perfectly. At the same time, we set about centering the bike’s front wheel on its axle. Once the wheel is centered, we took measurements of each side for the purpose of wheel spacers. As the axle is longer than just the width of the wheel and brakes, the spacers will be necessary to hold the front wheel in its place, keeping the ride straight and true. It’s an exercise that demands precision down to the fourth or fifth decimal place. 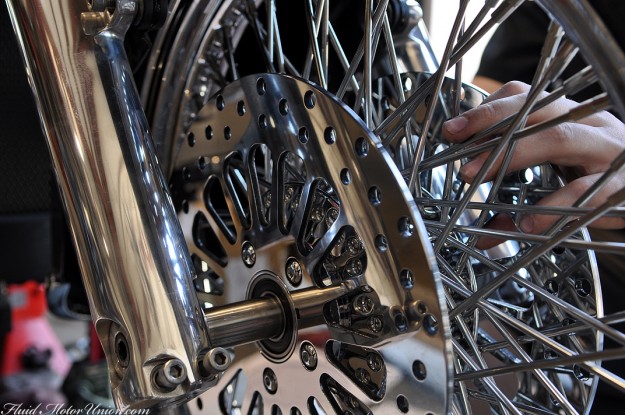 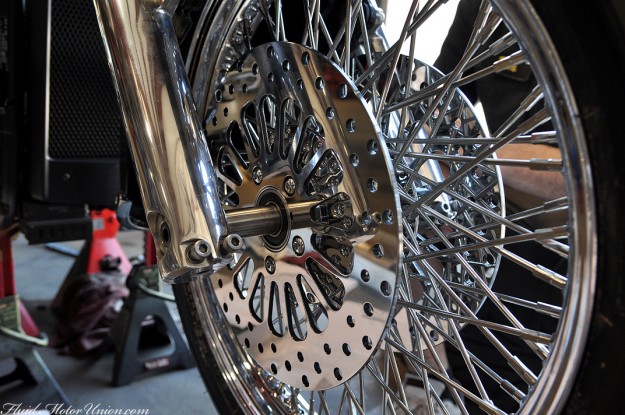 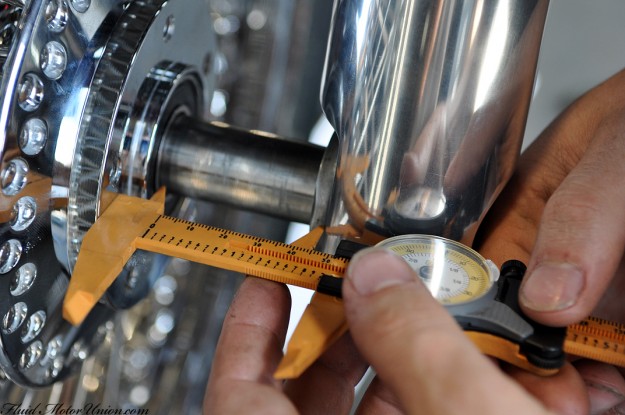 With the spacers measured out, we set about cutting up some tubing to create a raw version of the spacer. Obviously, using a ruler gets you close, but it won’t get you exactly there, so these were more to see how the spacer would look than anything else. In a word, you won’t even be able to tell they’re there, as it runs flush up against both the fork and the brake rotor. It also centered the wheel nicely, so it’s the first step in making sure this bike has absolutely zero wobble to it. Any sort of inconsistent tracking at highway speeds and it’s trouble time. 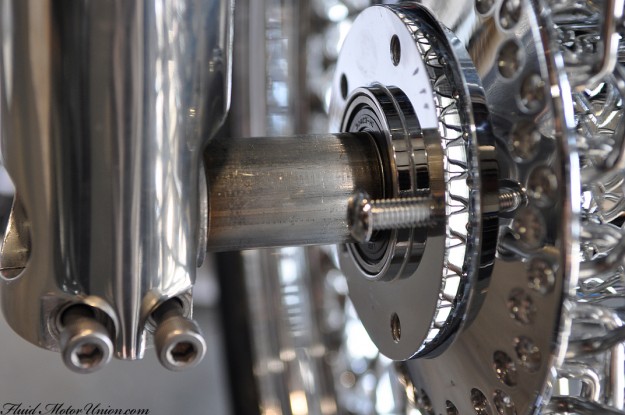 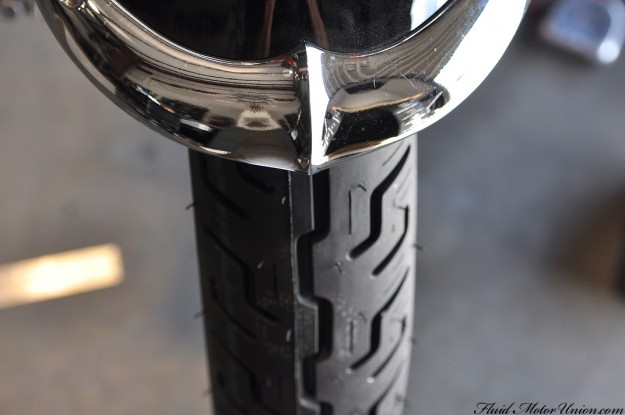 All the pieces are now in place. Well, the pieces we couldn’t make ourselves, that is. Now that we’ve accumulated everything on our end, it’s up to us to get our asses in motion and start fabricating. After we measured out the spacers, we started programming them into CAD and then the CNC mill, so things are about to get a little more fab-oriented on this build. Stay tuned! 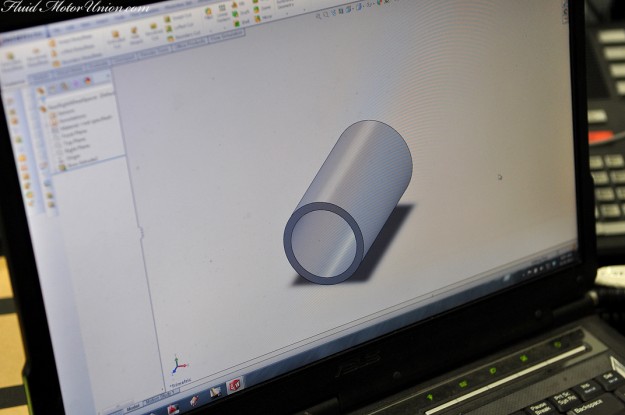