We return to the LS1-swapped blobeye Subaru WRX for today’s blog post, picking up right where we left off — exhaust hangers!

Last time we looked at this project, we covered the build-up of the custom exhaust, from its custom long-tube stainless headers all the way back through the x-pipe, back to the pass-through resonators at the end of the transmission tunnel. Well, once it’s done, this exhaust system won’t be able to suspend itself without a little bit of help, and that’s where we start today’s blog post. There are three main exhaust hangers that need to be constructed — one up front by the transmission, and two further back towards the rear of the vehicle. Starting at the back, we used two of the differential mounting bolts to fashion a hanger for the passenger side of the dual exhaust pipes that will snake underneath the suspension — a new hanger on existing OEM mounts will take care of the driver side. Once we finished it, we realized it could use a bit more reinforcement (as we’re rather overbuild it than underbuild it), so we added a few extra pieces. 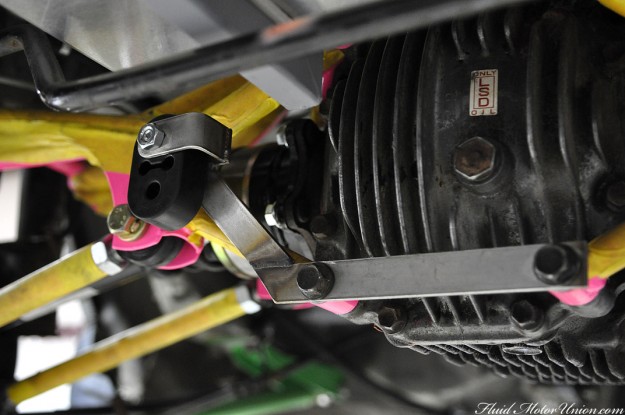 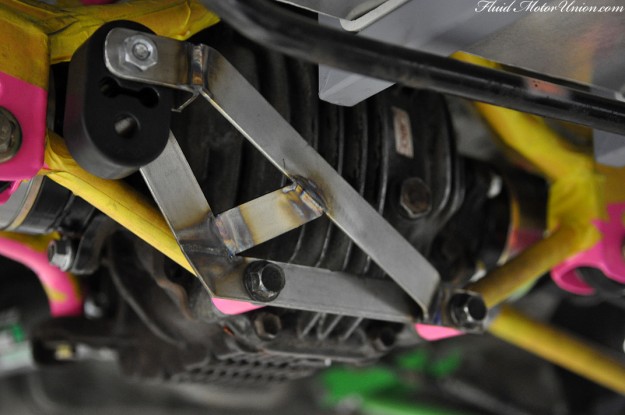 Up front, we used another piece of existing hardware to mount the exhaust hanger — this time, it’s the giant transmission mount that surrounds the rear of the transmission. By hanging the, uh, hanger off the center of the mount, we’re able to secure both sides of the exhaust with a single piece of metal. You can see in the second picture below how we accomplished that — it will still slide on and off easily, but now it will support both pipes evenly as it hangs there. We’re trying to keep movement to a minimum with this setup, since everything is custom and free space isn’t exactly abundant. 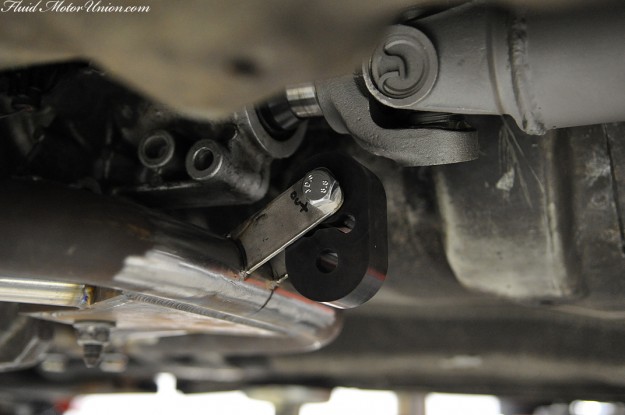 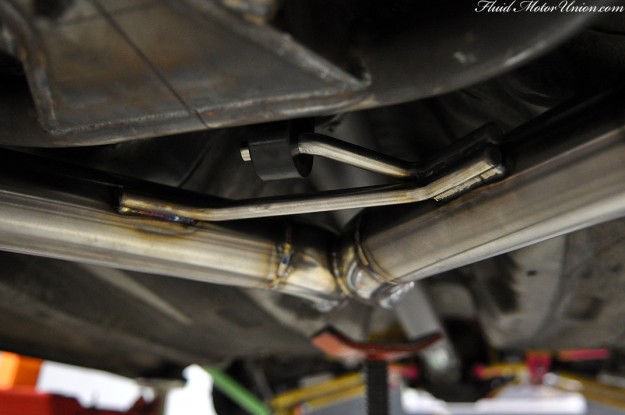 That leaves us with one more exhaust hanger to fabricate. This one is placed, once again, on the passenger side of the vehicle, halfway between the other two hangers we’ve covered thus far. As with the rearmost hanger, there’s an OEM equivalent that we’re using on the other side, so fear not, both pipes running to the muffler will receive equal reinforcement. This hanger will also be fabricated off two different bolt mounts, so the weight it carries will be better distributed across the whole hanger assembly. 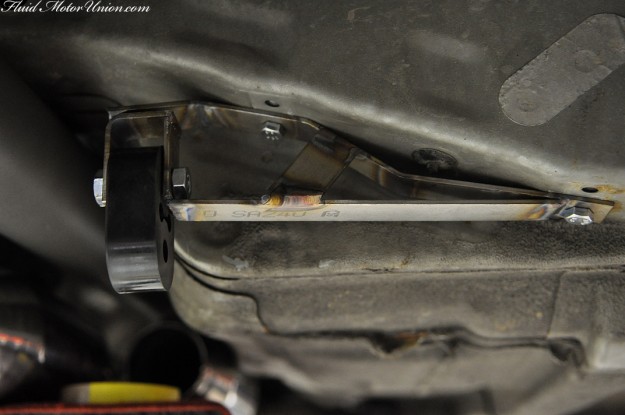 With the hangers out of the way, we set about finishing up the pipes as they run towards the back of the vehicle. After more taping, tacking and cutting, we finalized the welds for the section of the exhaust that will come off the resonators and bank towards the driver side of the differential, where we have just enough space to snake the pipes underneath the various suspension arms. We’re also working on the piping that will run from the differential area, upwards toward the muffler. There should be more coverage of this exhaust as we near the conclusion next week. 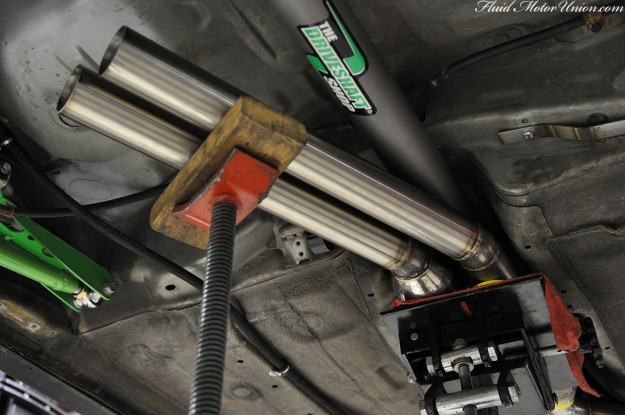 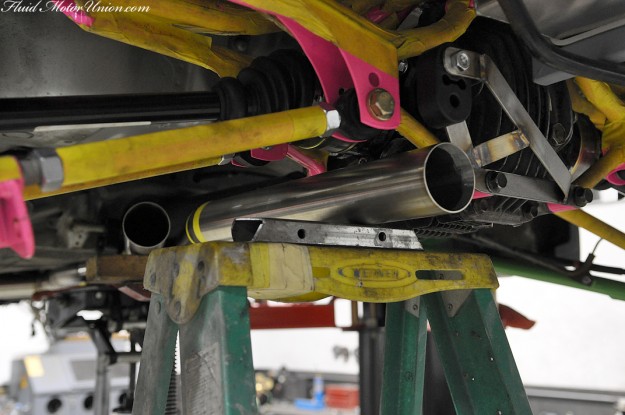 Moving back to a more personal project now, Tom has been continuing steadily his work on his soon-to-be-wire-tucked Z32 Nissan 300ZX. With the tubbing finished, Tom’s now started adding body filler to define the edges of the engine bay as he wants them. He’s also added two dimple-die panels just underneath the tubbing; used for both strength and aesthetics, there will be quite a few of these panels around the car as time progresses. There’s still plenty of work left to do before he starts painting the engine bay, but for an hour or so after work every day, his progress is coming along nicely. 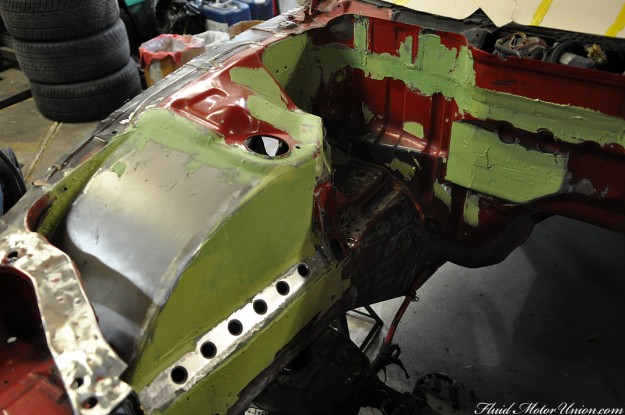 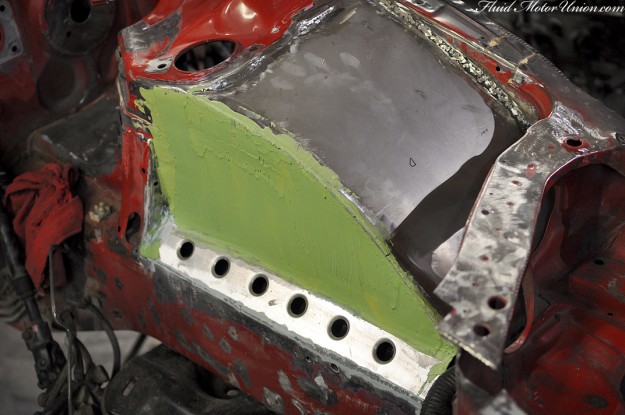 And finally, we’ve got one random picture from the service department. We had a customer bring in his E60 M5, saying it had some oil delivery issues in the past and now there was a sound in the motor. Well, a lack of proper oil delivery usually results in something that’s never fun to discover — and it’s exactly what we discovered. So, for now, we have the connecting rod bearings out while we investigate further. Ouch. 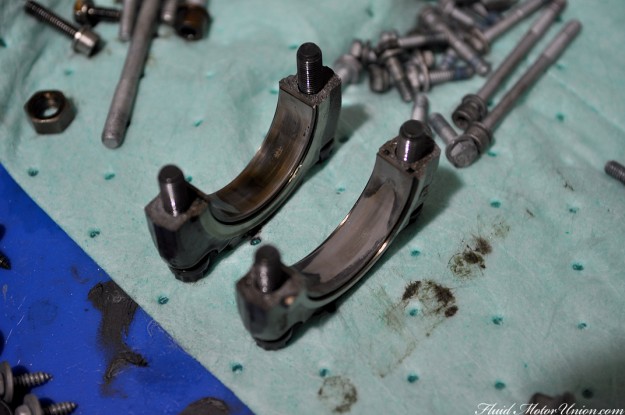 Have a safe and excellent weekend, and we’ll see you back here next week!