After an extended break for Christmas, we’re back in action for two days (three, counting our shorter Saturday) until it’s time to ring in the New Year!

The last time we finished up coverage of Dan’s freshly-bagged Hyundai Accent, we had just cut out the base sheetmetal for our new trunk floor. Today, we’ll be assembling everything until it’s just about ready to go. First up, the way the floor is constructed, we need to have two separate holes drilled in the floor to accomodate lines that need to pop up and connect to the tank. So we went about drilling and installing a rubber grommet on the hole that needed to be drilled in the sheetmetal on the driver’s side. 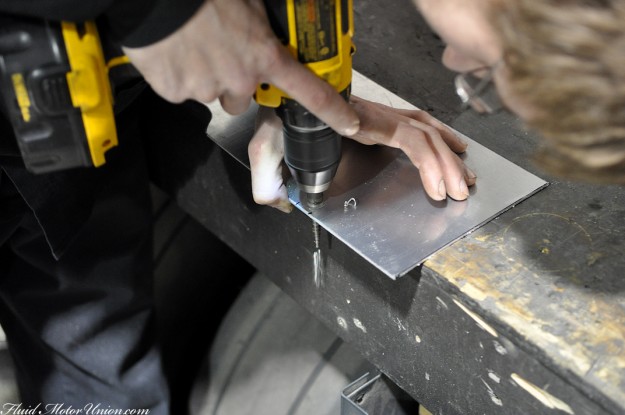 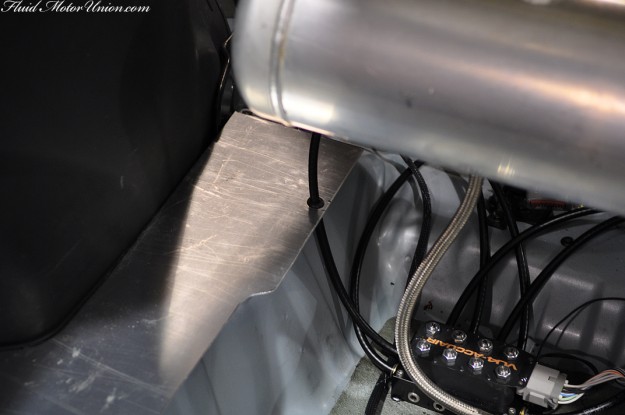 With that out of the way, it was time to cut the plexiglass center portion of the floor. After measuring and drawing out the exact shape we needed, we went about trimming the massive square of plexi until we had a center section of our floor. We also drilled the slot that would accomodate the line that the compressor uses to fill up the tank. We left the translucent coating on the plexiglass itself in order to prevent it from getting marred while we finish the remainder of the trunk area. 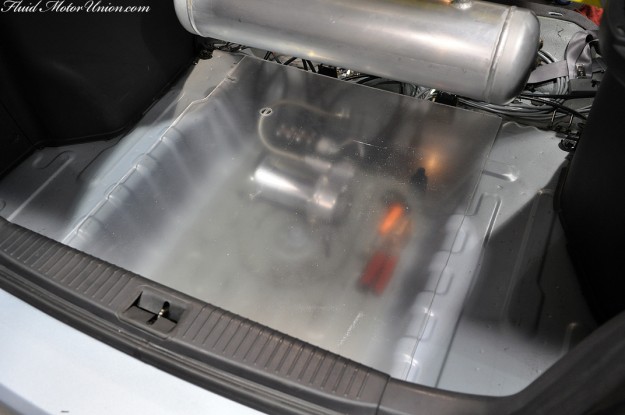 Now, the floor is assembled from pieces of two varying heights. The plexiglass’s thickness is decidedly more than that of the sheetmetal, so in order to tuck the plexiglass underneath the sheetmetal and have it all looking like one giant piece, we’ll have to space the sheetmetal slightly above the bare metal floor in the trunk. This would require us to fabricate several (and by that, we mean ‘a ton of’) metal spacers on our lathe, along with drilling the sheetmetal such that we’ll be able to run screws from the sheetmetal, through the hollow spacers and into the floor. This way, there’ll be no rattling or other unsavory noises during the vehicle’s use. Below, you can see the spacers before we cleaned up their insides, along with a shot of them on the Accent’s floor in the correct positions. Since the floor is covered in a number of contours, there will need to be several different sizes of spacer created. 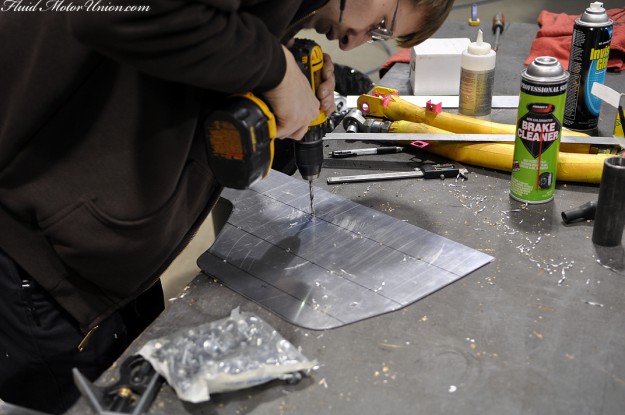 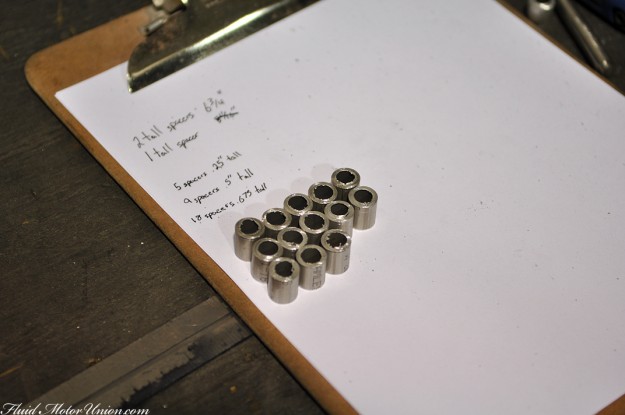 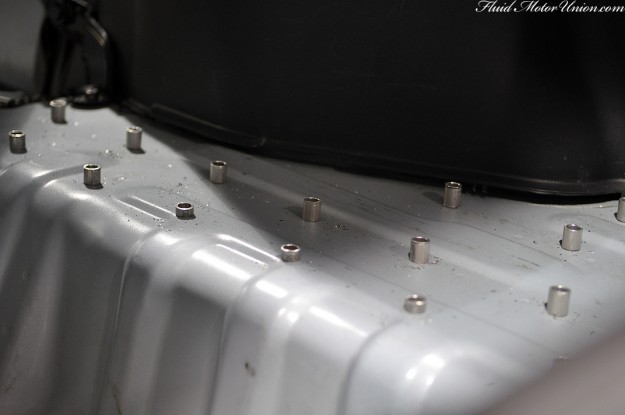 We also realized that the OEM aqua-like color of the Accent’s body doesn’t really look too flattering with the AccuAir components installed on top of it. Therefore, with a bit of masking and a good deal of ventilation, we painted the visible portion of Dan’s Accent floor to a much more appealing satin black. This way, the AccuAir components will pop just a bit more when you’re looking at the floor. 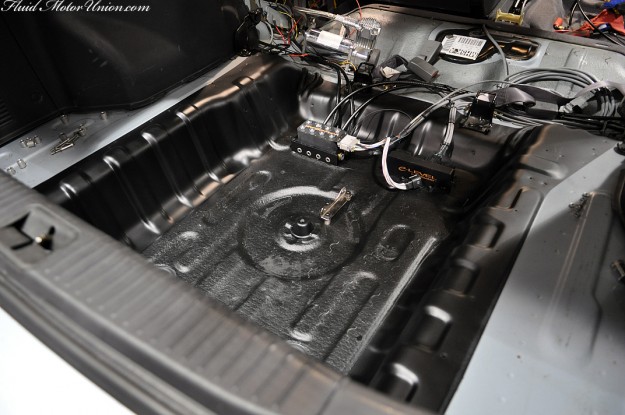 We also had to space out mounts to hold the plexiglass to the Accent’s body. Using the same lathe-based method as the other spacers, we fabricated some longer spacers — only three this time, so we don’t cover up the pieces de resistance underneath. All the spacers will be held in place with the use of bolts and washers, which will be left exposed for aesthetic reasons. 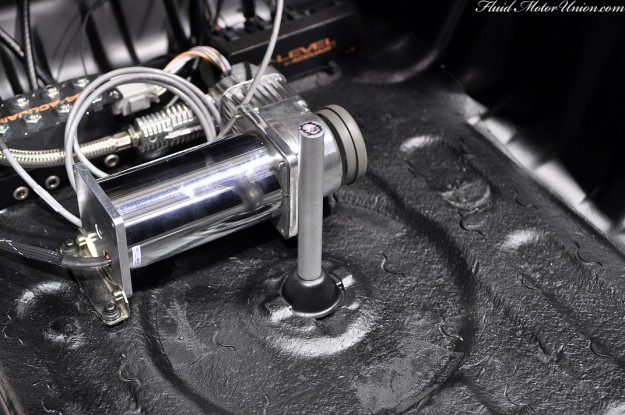 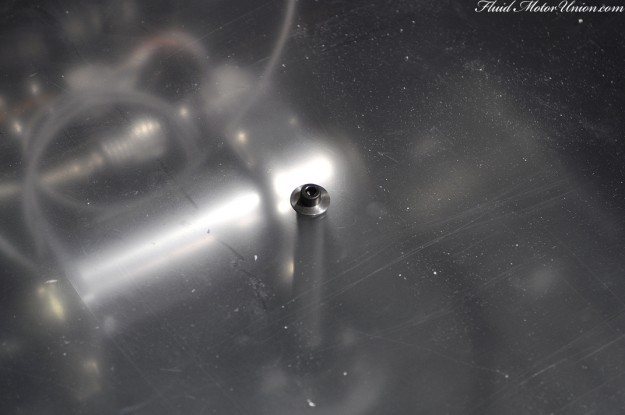 And with that, we have ourselves one (almost) completed fake floor for Dan’s Accent. We still have the translucent covering protecting the majority of the plexiglass for the same reason as before, so it’s not ready for “here it is, it’s all done” pictures, which will come after we’ve reinstalled everything, calibrated the system perfectly and are ready to release it. Hopefully this will whet your whistle in the meantime (especially for you, Dan, as something tells us you’re reading this): 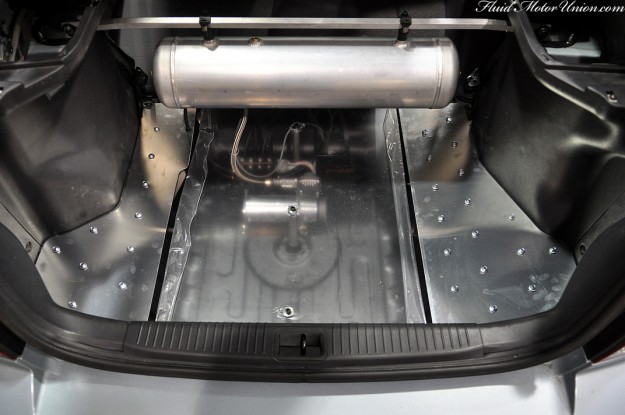 As we finish up Dan’s Accent, we have a couple other big jobs that are moving along on the Fluid MotorUnion campus, so come back to the blog tomorrow to see what else we’re up to. Have a great day, and if you’re still on vacation, enjoy it!