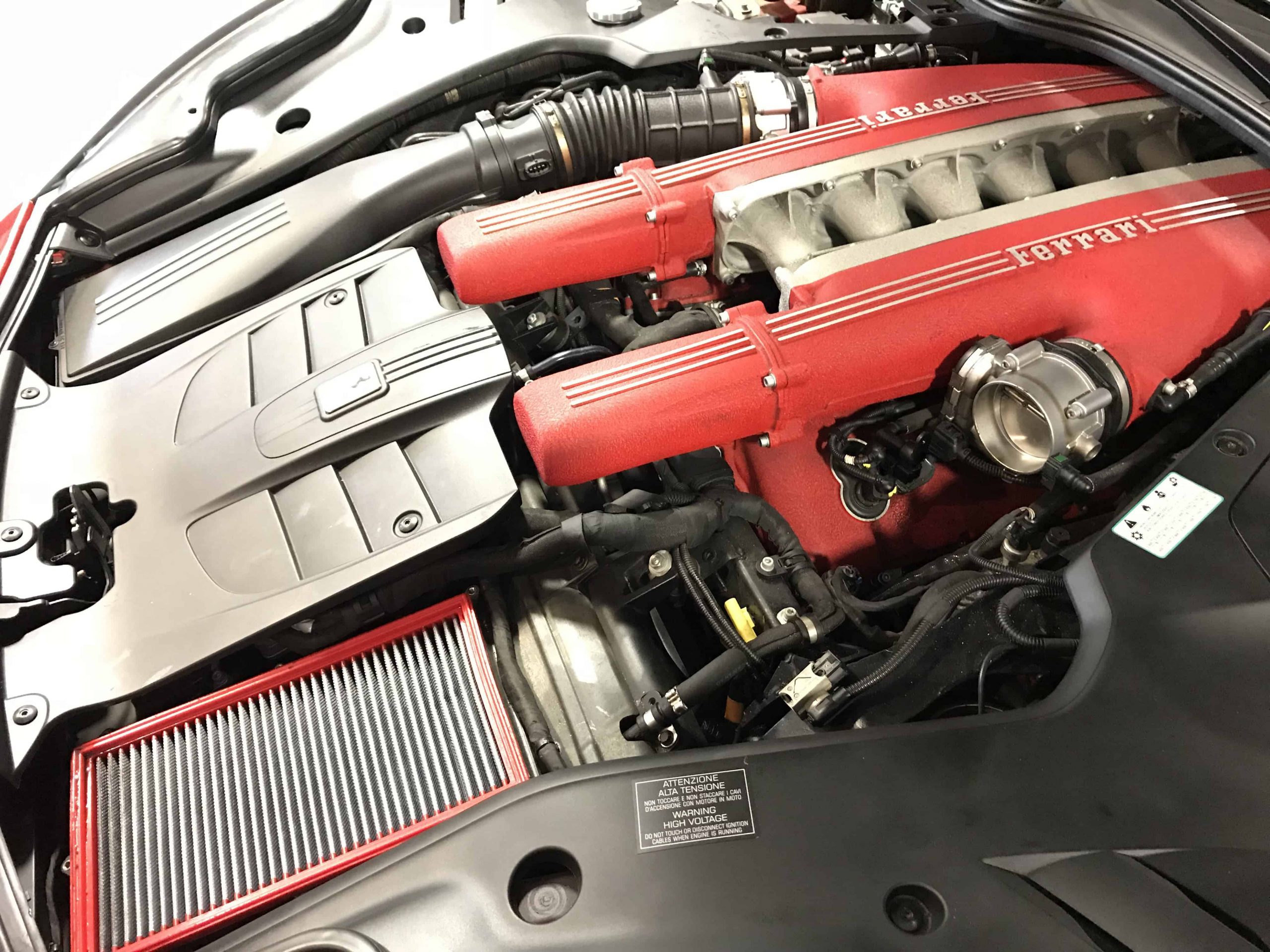 This F12 came in with a peculiar problem, a Ferrari Intake Oil Leak! Visual inspection had determined that oil was all over the undershield. Since this Ferrari came with a dry sump oil system, there is a specific procedure to check the oil level. After following this procedure, it was determined that the oil level had was right at- NOT above the MAX level line. Our first step was to find the source of the oil leak. Getting the vehicle onto the lift itself proved to be quite the task. The addition of carbon fiber side skirts along with the fact that this specific F12 happened to be missing the factory installed lift pads made lifting a lowered exotic even more of a challenge. 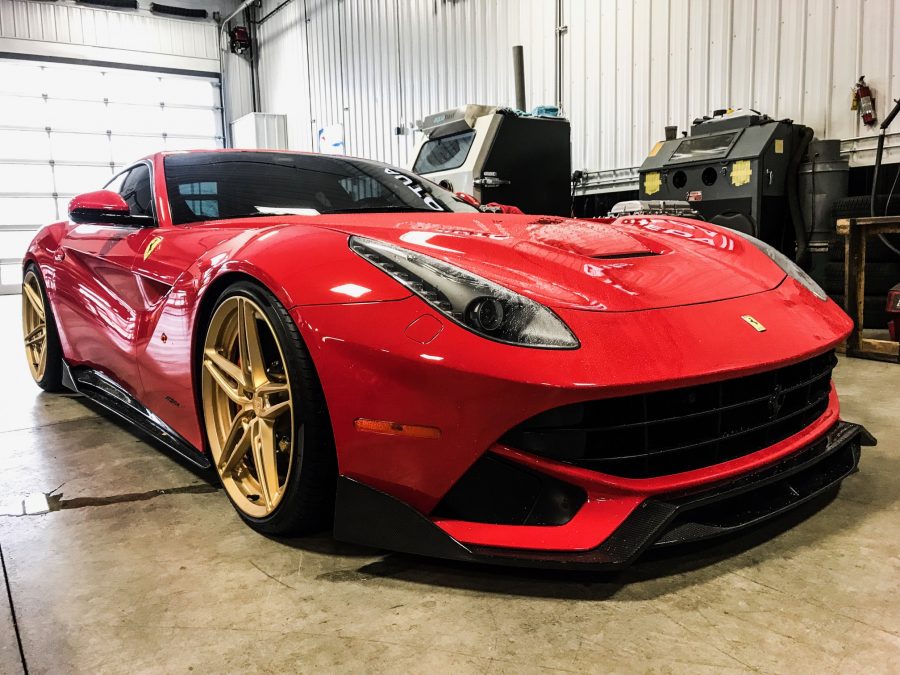 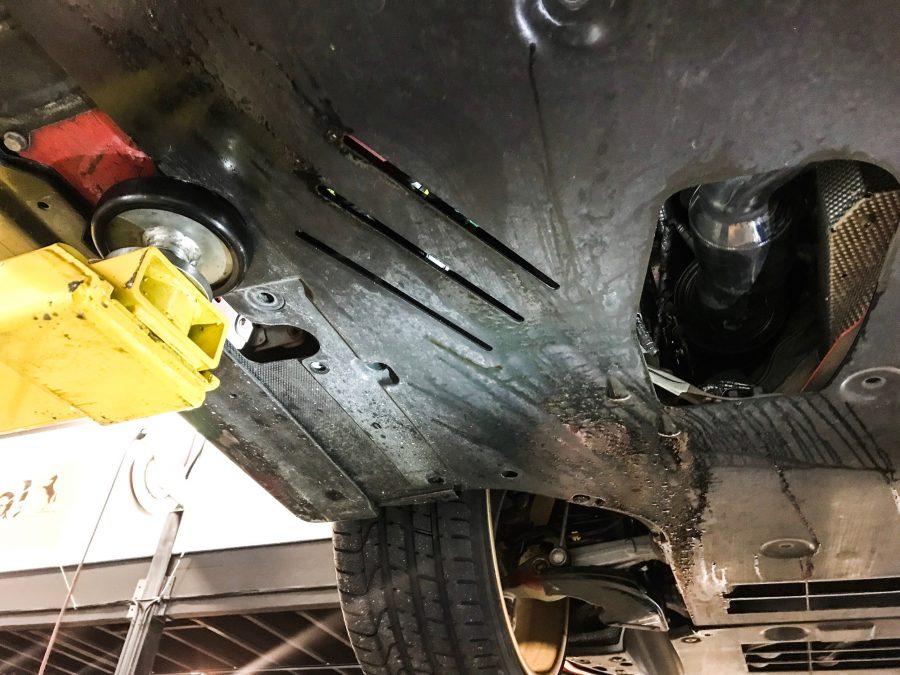 Once on the rack, we found the oil leaking out of the air boxes towards the rear of the air intake. Oil was coming back through the intake track and leaking out at a rapid rate. Only oil vapor should be present in the air intake system as liquid oil can lead to a potentially serious and/or catastrophic engine issue. This means we could not start the engine again until the oil ingestion issue has been handled.

Some potential causes for this could be a faulty crankcase ventilation component or an issue with the oil sump breather. The fact that the oil level was at the max line on the dipstick; however, means that under high load, excessive oil could make its way through the breather ventilation tubes of the dry sump reservoir. If the oil level was at max when we received the car, and judging by the amount on the under shield and the amount in the intake tubes, we were sure the oil had been filled over the max level at some point recently. Because of this, the excess oil was being picked up via suction and was filling the intake boots up so much that it then leaks out of the air boxes. Once we recognized the potential issue, we drained the entire contents of the oil sump from the engine. We then measured exactly how much we had taken out before refilling to a normal level. 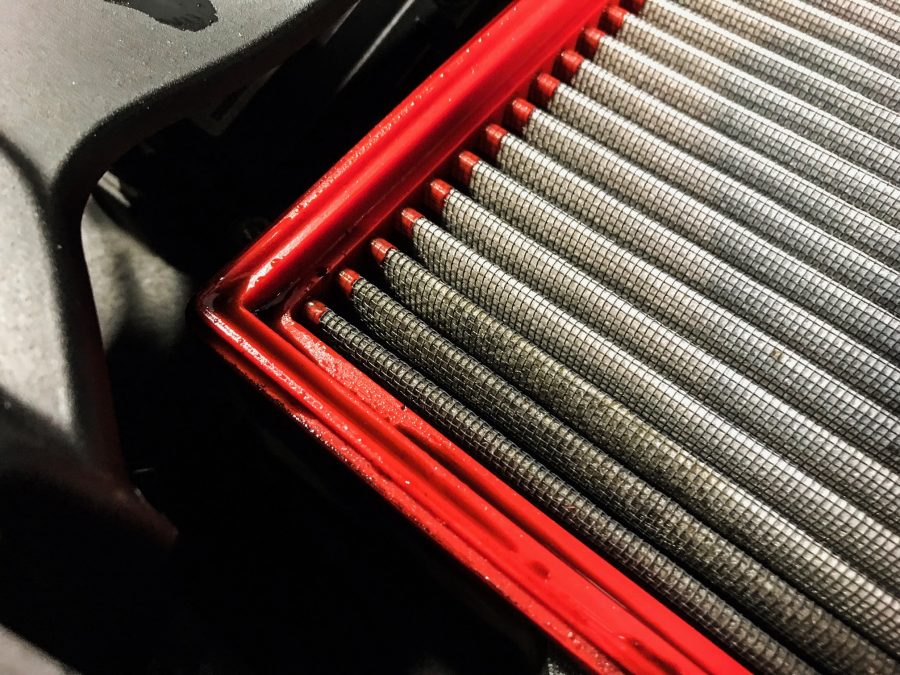 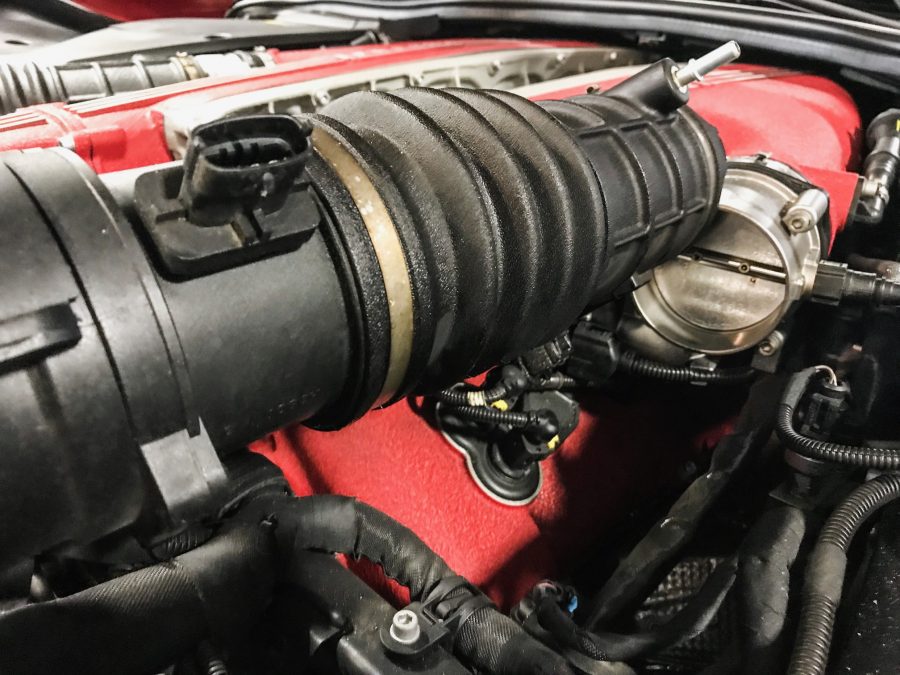 Ferrari is very precise on how the oil has to be checked in order to receive an accurate reading. To check the car you need to get the oil to operating temp (194F), rev the vehicle between 2.5k and 3.5k rpm for 1 minute then let it idle for 2 minutes, checking before the third minute is complete. Checking the oil may need to be repeated at least twice to receive an accurate reading, so after it cools a bit, run it back up to operating temperature, then check once more.

The video attached shows this process being completed start to finish including our check of the dipstick. The level has to be within these two markings shown on the stick which represents just over 1.5l.

To ensure that their isn’t a more serious issue going on, we could run a compression test and a cylinder leak down test to determine if the engine combustion chamber is sealing. Given where the oil level was currently at and how much oil was in the intake tubes, we decided the proper plan of action was to take some oil out, thoroughly clean the tubes, then recheck in a week after some driving. That way we keep things simple and cost-effective because it more than likely was just overfilled and isn’t that serious of an issue to warrant the cost of further testing.

Ferrari F12 Berlinetta – Oil Leaking out of the Intake 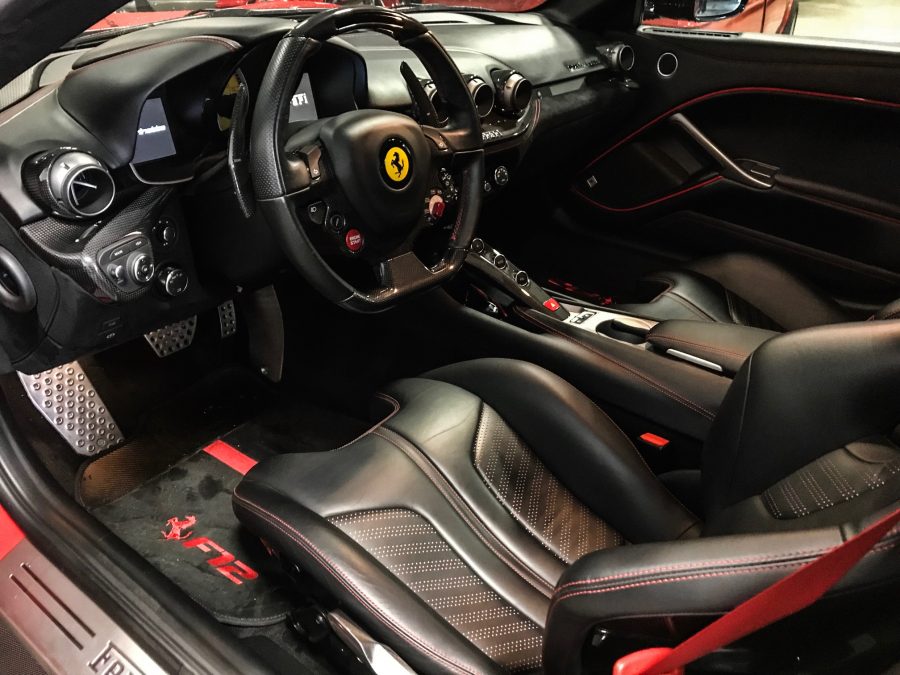 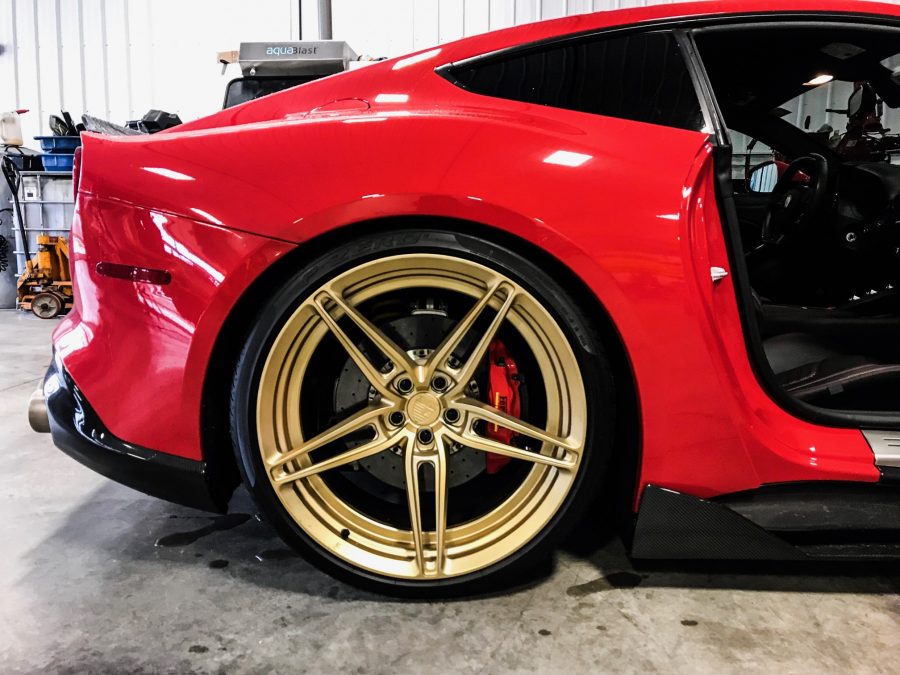 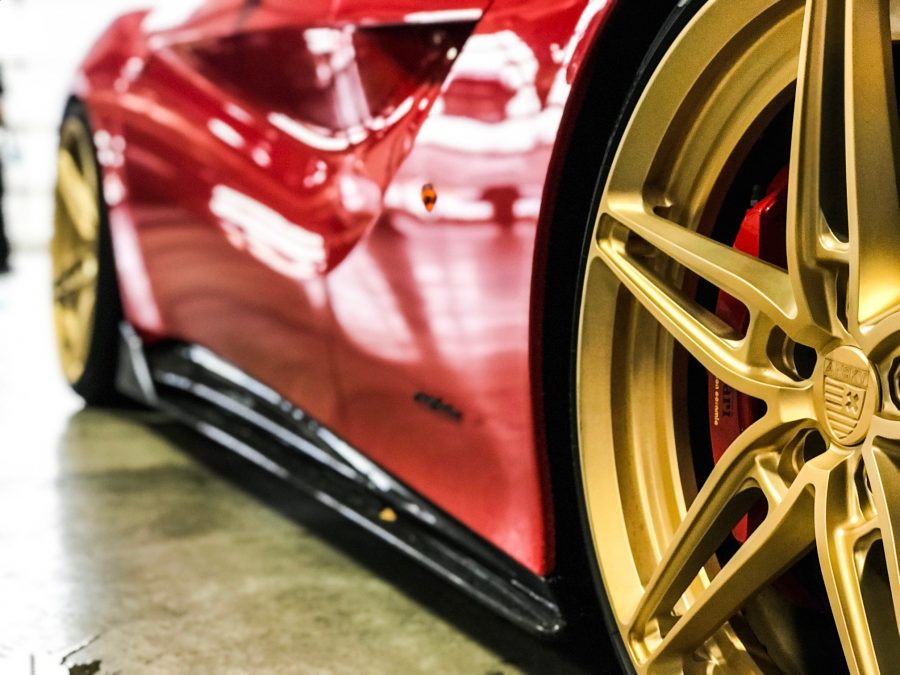