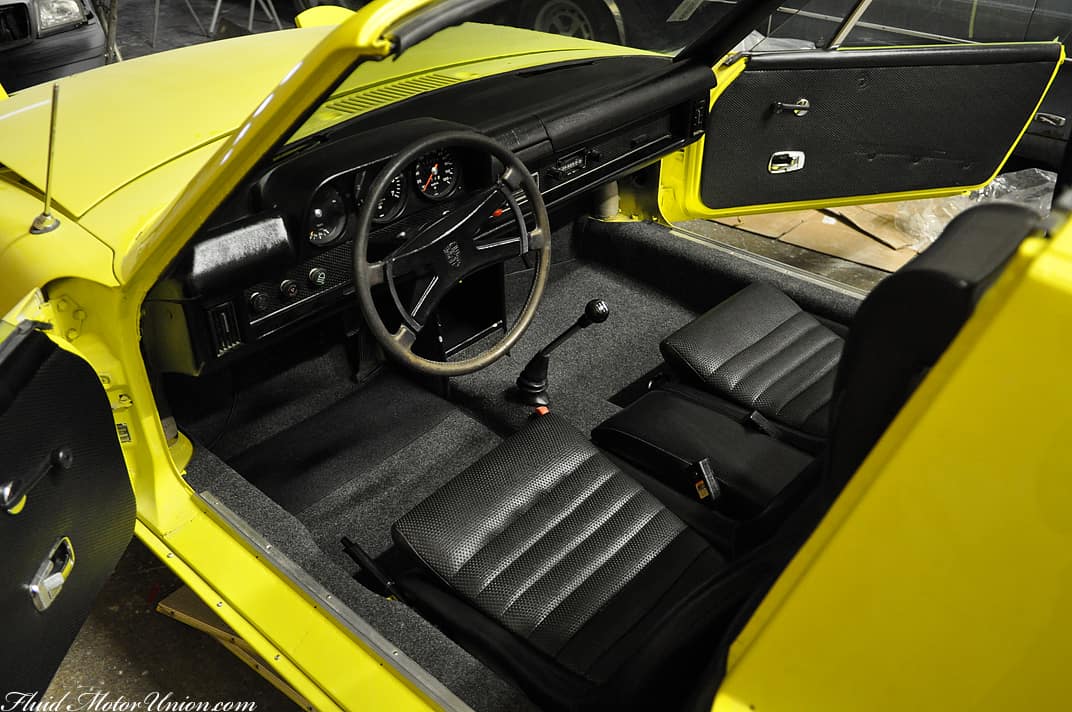 Today, we’ll be doing some freshening up of a couple different jobs, in an effort to bring them back to their former glory.

First up, we have another small update on the rust removal and restoration of the Porsche 914 that’s currently in the shop. More and more new parts continue arriving, and it’s only a matter of time before we have everything in place to get the car started and running right. In the meantime, though, we were still missing an interior, so we went about fixing that. Prior to reinstalling the original seats, we ordered a whole new set of interior carpeting that will cover all the repainted and repaired sheet metal underneath. With everything reinstalled in the interior, the car is truly as close to factory fresh as it has been in a couple decades. Once the interior was reinstalled completely, the family that owns the car came by to talk with Chris about the restoration’s progress, as well as to check out the car in person. To put it succinctly, they were quite pleased with how everything’s turned out thus far. The look on their faces when they saw this car coming back to life was truly an awesome moment. After finishing discussions on the next step for the 914, we set to work getting the remainder of the fuel system in place. We had to order and wire in a new fuel pump, as well as a couple other parts. Once everything was buttoned up, we reinstalled everything in the bulkhead just forward of the dashboard. Now it’s time to get out our big ol’ can of elbow grease and get this car started and tuned up. In other Porsche news, we had a Tiptronic-equipped Boxster roll through the shop recently for some transmission issues. Once we dropped the transmission’s pan, we realized what the source of the issue was. Its ATF was well past due, coming out in a completely opaque olive drab hue that is indicative of a fluid past its prime. A quick swap was all it took to get the car shifting better, but sometimes the issue can go either way. Older fluid can occasionally help “hold together” an old transmission that hasn’t ever been flushed, and swapping in new fluid can be a practice that brings the transmission closer to its deathbed (not that the transmission wasn’t already heading that way, albeit at a slower pace). That said, sometimes all an old transmission needs is some new fluid before it starts performing well again. We’ve seen people argue for both sides of the debate, and it really comes down to a car-by-car basis. Do you think your transmission isn’t up to snuff? Don’t just swap out the fluid; give your local independent service shop a call and see what their take on the issue is. And with that, four days of the week are behind us. Come back tomorrow for FMU’s final blog post of the week, where we’ll be taking a look at a recent addition to our service stable. It’s a fun one that you’ll be sure to enjoy! Until then, have a great day!