Direct Injection Problems are becoming rapidly more prevalent as more new cars are turning to this new technology in order to reach better emissions, fuel efficiency, and more performance. This method of fuel injection precisely delivers fuel directly into the cylinder just before the moment of combustion. The potential loss that was once a factor with “on valve” or “intake manifold” injections is greatly negated with direct injection. With all the benefits of direct injection, its easy to see why this technology will soon become the standard delivery method for internal combustion vehicles. There is; however, a dark side to this wonderful, new technology. (to learn more about direct injection, check out here)

As little as 20 years ago, a vehicle suffering from carbon build-up would inform the mechanic that they were probably dealing with a person that only used the cheapest possible fuel. When liquid fuel hits a hot intake manifold or valve, it immediately starts to evaporate. This is actually a good thing, as vapor fuel is much easier to ignite and leaves less unburned fuel that can either exit via the tailpipe, or get left behind in the engine oil. When the fuel vaporizes; however, it basically boils the gasoline, and any impurities are left behind either on top of the valve or in the intake manifold. These impurities are microscopic, and given a long enough drive they can be dislodged and burnt in the combustion process. During short drives they can remain stuck to the valve and overtime they can build-up to mounds that cover the valve and line the intake manifold. This mound of carbon can impede fuel vaporization and disrupt airflow, thus robbing the engine of efficiency and performance.

A way to combat carbon build-up on these older non DI vehicles, was to either use a higher grade or better quality gasoline, or use some sort of fuel system cleaner. Not only would fuel system cleaner use a chemical that would remove deposits from the fuel pump and injectors, but the chemical would also break up carbon at the point of injection. This would slowly clean the valves and intake manifold of the hardened carbon that diminished performance and efficiency. This also helps remove the threat of a hardened carbon falling into the engine and causing catastrophic damage.

So without gasoline spraying onto the valve, carbon build-up Direct Injection Problems must be a thing of the past, right? Well, it turns out that carbon issues are more prevalent than ever. Since the early ‘90’s, gasoline quality standards have been much more regulated than years past. This means gasoline is more volatile and, therefore, leaves behind less carbon once sprayed. Good news for traditional injected motors but what about the direct injection motors? Why are BMW, Audi, and other manufacturers having so many issues with massive carbon build up on cars just outside of warranty? The answer lies in the push to regulate unburnt hydrocarbons.

Hydrocarbons come from two main sources on the modern automobile. One from fuel evaporation and the other, the culprit of Direct Injection Problems is the carbon build-up from crankcase vapors. Crankcase vapors were long ago vented to atmosphere; however,due to tight emission regulations, now have to be re-burned as part of the combustion process. (For more info on the crankcase vent system check out paragraph 5 in my winterization blog here) This mixture of air and oil enters the intake track and once it hits the valve, it coats it in a film. If the drive is not sufficient in length, it will stick, and the build-up process begins. Without the injection of fuel washing the valve off, the pace for carbon build-up is greatly accelerated. Where carbon build-up was only common on cars with high mileage and poor maintenance, it can now affect the most diligent of owners. 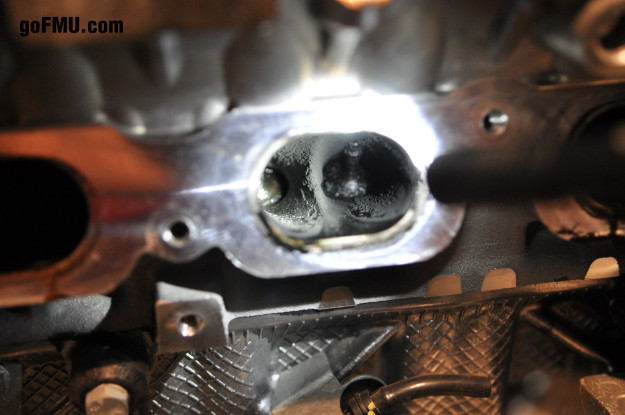 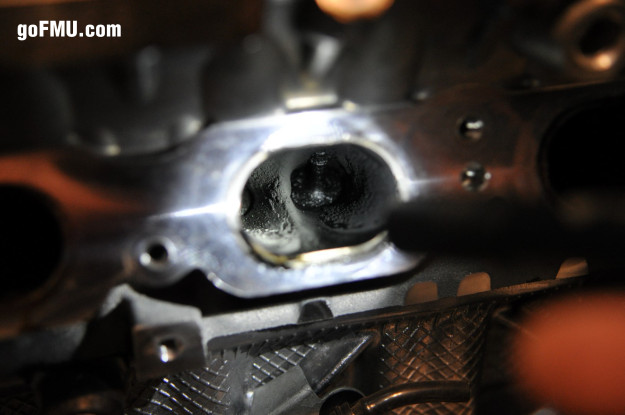 So maybe you found this blog post because you have misfire fault OBD2 codes P0300, P0301- P0308 or found your performance is lacking on your bmw 335i, Audi RS4, Lexus IS250, or any other vehicle that is direct injected, and you want to know how to get it fixed? The popular method right now seems to be using walnut shells to blast off the carbon. Walnut shells are less abrasive to harder metals than sandblasting, so they won’t damage or change surfaces. Walnut works very well at cleaning the softer carbon off the valves, but has a difficult time getting off the more aged, hardened carbon. Also walnut shells are best used in an enclosed area as they can get into very small areas and damage subsystems. Unless the part in question is completely removed, it is almost guaranteed that the shells will get somewhere unintended. So it is best left to an experienced technician in order to ensure nothing gets damaged.

How does Fluid MotorUnion clean carbon build-up on direct injection cars? Well, it’s almost been our little trade secret for a few years; however, I am feeling a little generous so I will let you know how we go about it. Now, do not attempt this if you do not have sufficient mechanical ability and understanding as you can seriously damage the engine. Our method involves a typical walnut blasting, but we take it up a notch by using a chemical for a like-new cleaning of the intake port. This is not just any chemical, but one that was specifically designed to be used within the confines of a modern automotive engine. It is “BMW Group Fuel Injection and Induction System Cleaner Concentrate” Part number 82 14 0 428 376. This concentrated cleaner, when allowed to soak for at least 3 hours, softens up the hardest carbon, and allows the heat from the engine to break up the rest.

We remove the intake manifold to expose the valves, rotate the engine over by hand until the most valves are shut. We then perform the typical walnut blasting service that will remove 75% of soft carbon deposits. How do we get the remaining hardened carbon the walnuts just won’t budge? We use a chemical cleaner that we pour in with the valve shut then let it soak. The more time allowed to soak the better the results. A brush is used to scrub the valve every so often, thus agitating the mixture, allowing the chemical to further soak into the carbon. Once the desired amount of time has passed, the remaining fluid and carbon is sucked out. Next, turn the engine over to access the remaining valves and repeat the process. Rarely fluid that escapes into the cylinder can be properly ejected by pulling the spark plugs and turning over the engine. It is important to get it all out as any leftover can hydrolock the engine and cause serious damage. Be sure to also disconnect remove the ignition coils, as it can be a fire hazard if they arc to the engine and ignite the fuel. Once complete, you should be able to see some shine of metal again on the once carboned areas. If not, don’t fret. Once the heat of the engine builds, it will crack the remaining carbon free and burn it up. Once reassembled, the engine may have some difficulty getting turning over, so use clear flood mode by placing the accelerator pedal to the floor and that should get it going. Sit back and watch as the remaining carbon burns off in an amazing plume of dense, white smoke for the next 10 minutes. 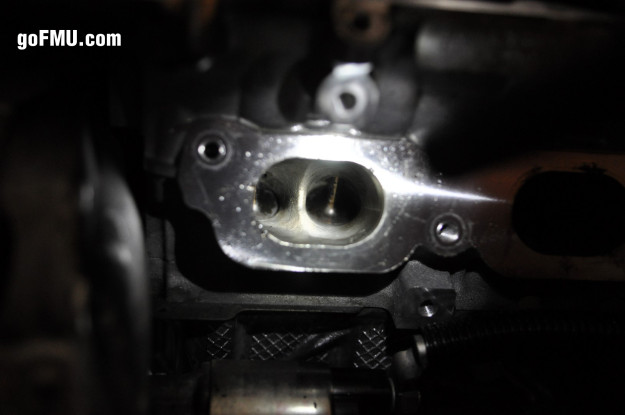 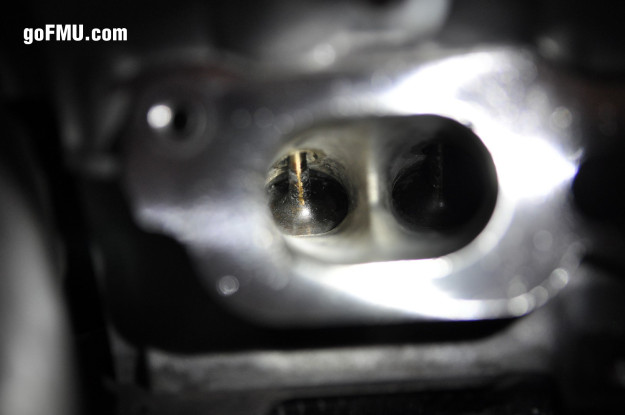