Today’s blog post consists of random pictures focused around one of two concepts — collapsing and cutting. Get ready, emo kids.

First up is the only part of the post that involves collapsing. Yes, we could have attempted to work all today’s pictures under the ‘cutting’ column, but hey, it’s almost the weekend. There’s not much to say about this picture other than one single sentence — if your mount looks like the one on the left, and not the one on the right, then it’s collapsed and you should probably get it replaced. This one came to us courtesy of Andy in the service garage. 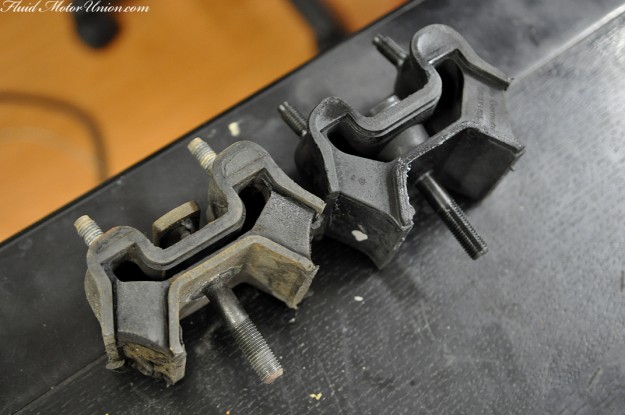 Next, we move on to the cutting side of things, as we head over to the fabrication garage. Earlier, we had shown you the freshly painted red engine fan under the boot (trunkhood? hoodtrunk?) of Tim’s 993-swapped original 911. Well, we didn’t strip the fan all the way down to the bare aluminum, so the paint ended up chipping slightly while road-testing the car. For that reason, Zak took it upon himself to throw the fan in the sandblaster and *really* give this thing a workout. Now, we’re going on a limb by calling sandblasting a type of cutting, but at the same time we’re really not; the sand shoots from the nozzle using compressed air, and it literally cuts through paint right down to the bare aluminum. The red paint was flaking away with ease, but the original layer of manila underneath proved a bit trickier. Either way, with a bit of elbow grease, and more time than elbow grease, we had it down to its bare form. 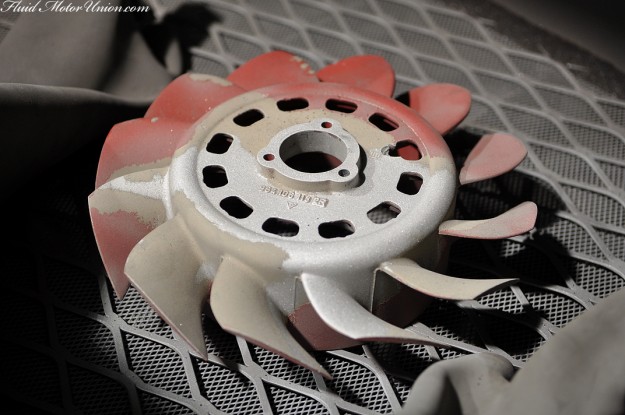 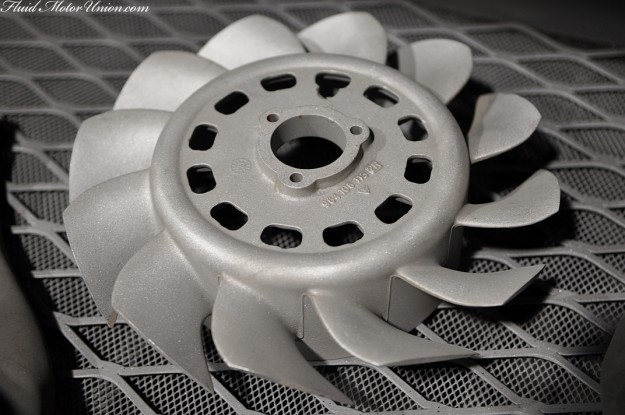 After a brief period during which we considered just spraying clearcoat over the bare aluminum (as it looked really nice), we took it over to the paint shop and applied the red coat once again. Having been sprayed directly onto the aluminum this time, the paint is sticking much better. Now it’s time to get back to that exhaust, which we’ll be covering soon. 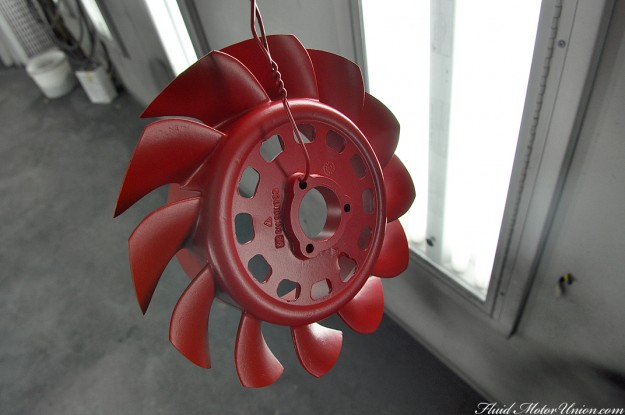 In another corner of fabrication, we’re still plugging away at the LS1-swapped blobeye WRX. Currently, we’re modifying the water pump’s outlet to make something a little bit larger. However, first, we’ll have to remove the end of the original outlet before welding a new one on. As the LS1 was never meant to end up in a WRX’s engine bay, there’s a good amount of modification that needs to be done in order to get the intake piping and the coolant piping to play nicely. First, we took a rag and pushed it as far down into the water pump outlet as possible. Seeing as how we’d be cutting this neck, metal shavings could end up in the pump itself, which wouldn’t be very good for the pump or the car. This rag should help minimize the post-cut cleanup we’ll have to do. 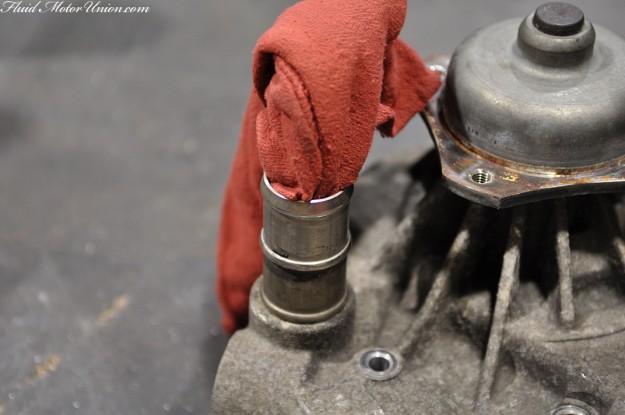 From there, it’s just a matter of slicing off the old outlet neck with a Dremel. Sadly, everything small enough to forego a large shower of sparks, so there aren’t many good action shots. Or any, really. 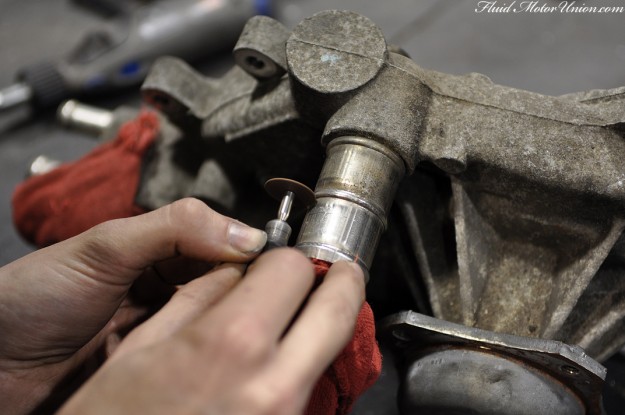 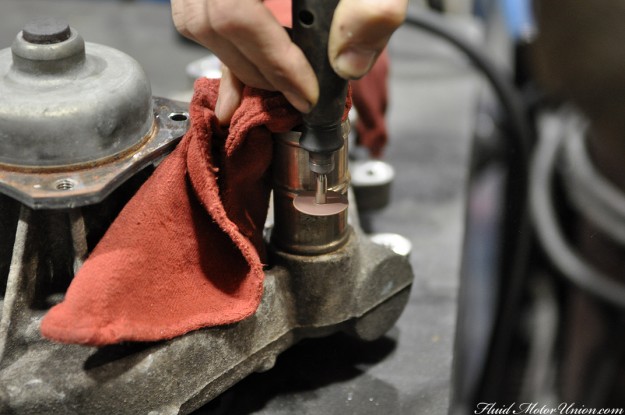 Okay, this next one has nothing to do with cutting, but it’s the only picture from this step that we have, and we wanted to make sure we brought it up. Again, the LS1 was never designed to work in conjunction with the gas pedal from a WRX, so we’ve had to make a few modifications to the gas pedal assembly in order to have the correct level of tautness in the throttle cable. This nut is going to connect to the pedal assembly to keep the throttle cable in check. Once it’s in the car, the owner won’t even notice anything’s been done. The devil’s in the details, after all. 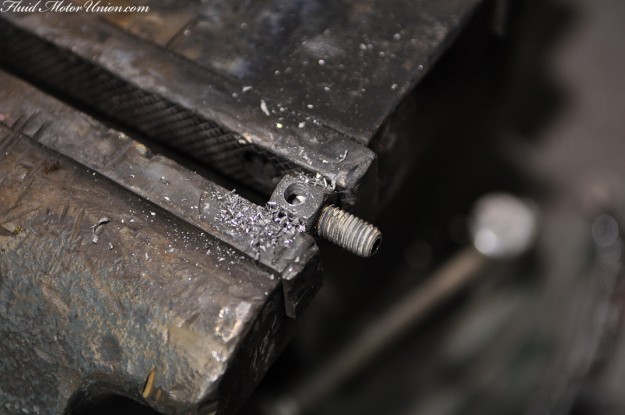 Finally, did we mention that the 190E is running? Well, after some fluid flushing, a fresh bit of gas and a computer hooked up to the standalone engine management system, we cranked the 190 for the first time in years. And hey, whaddaya know, she shot to life in the first few attempts. The last step we had before starting the car was creating a new shroud for the engine’s fan. This one was cut (see the tie-in?) from a sheet of bare aluminum, which we bent and drilled to accomodate both the fan and the engine bay. Now that it’s going, it’s time to start dealing with the myriad little gremlins remaining. Once she’s ready for the street, though, you can damn well bet we’ll have some video of it. Until then, cross your fingers! 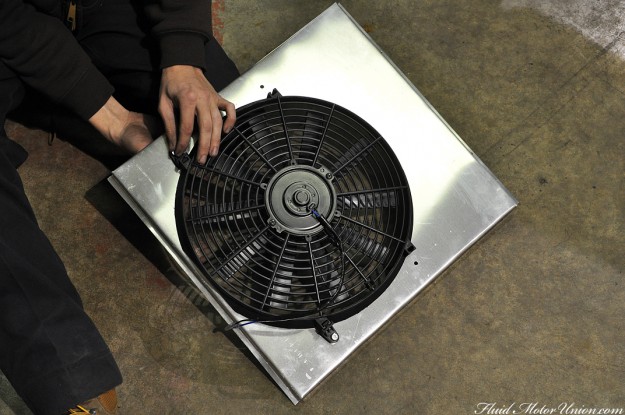 Have a great day, especially if you’re in Chicago — temps will rise until the weekend!