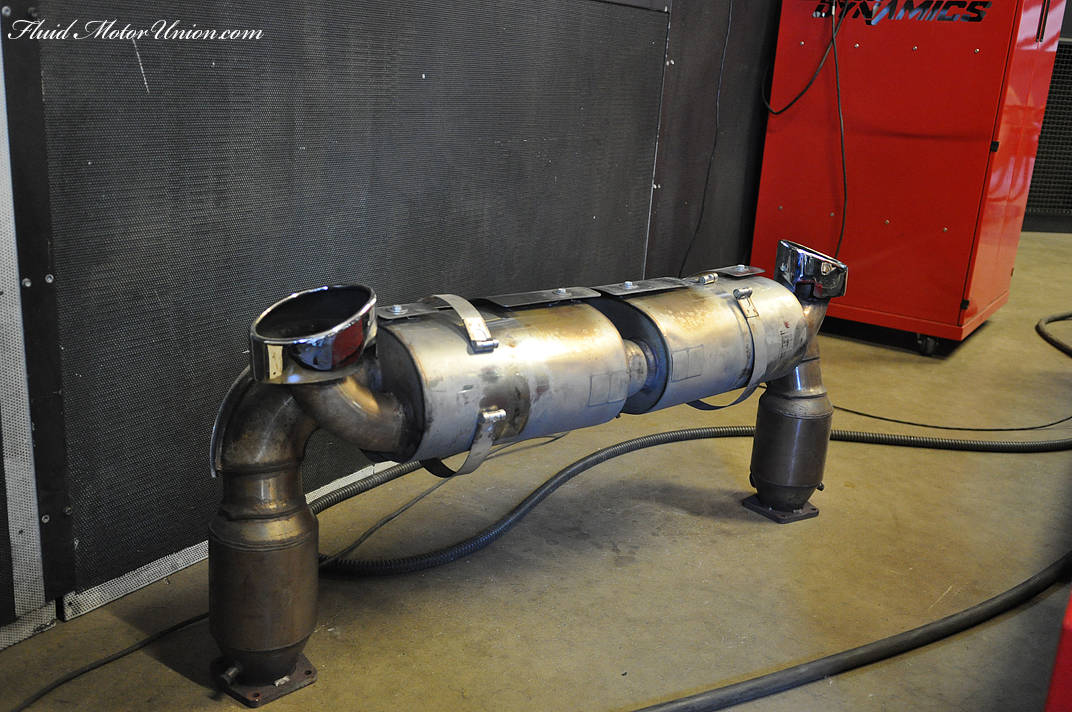 Today we have a beautiful 911 turbo who came in with a quandary, “What combination of exhaust will produce the best power without becoming intolerable?” As you may have read in one of my previous posts “High Contrast” , there is much more to exhaust design than “louder is better” or “biggest is best”. There is always a balance between sound, quality, and performance. This is the exact reason this client came to us. The factory 996 turbo is quite a car straight from the factory, boasting 420hp in a relatively light weight all wheel drive package. These cars have a rather large following so there is a wide variety of performance products to choose from. A common aftermarket favorite is the cat-back exhaust. Exhaust design can be a rather difficult undertaking when it comes to the rear engine P-cars. It might seem that having the engine in the rear would make routing the exhaust out the back a breeze, but this couldn’t be further from the truth.

You see, when designing an exhaust system, an auto manufacturer has to worry about safety, emissions, noise control, reliability, and cost. Now try to take all of those issues and package it into an extremely limited area and you have a Porsche exhaust. With that said, it can be rather easy to make an exhaust that only has to carry the exhaust gases away from underneath the vehicle. When trying to make power on a turbocharged vehicle, you only really need about a 6 inch length of piping past the turbo. The short setups are very common on race 911’s as they produce the best power and usually have the least need for regulation in regards to noise control. While power is nice, it can make for a very irritating drive in your luxury sports car. Ideally, a setup that maximizes exhaust flow while minimizing resonance will make for the best sound and performance. So that brings us to our customer’s ‘05 Turbo. Already equipped with a milltek 100 cell catted turbo-back exhaust, the customer wanted to find out what the performance gains would be if he switched to a Fabspeed catless system. Now, as you know the 911 turbo packs quite a punch right out of the factory doors, but seemingly this wasn’t enough for this particular P-car owner. The vehicle arrived sporting a set of K26 turbos, along with the intercooling and fuel upgrades to match. Needless to say, the dyno numbers that this car produced were impressive; 514 all wheel horsepower! Now if you know our dyno, you’ll know that anything over 500 is very a strong car. Factoring in roughly a 25% drivetrain loss (usually higher on AWD cars on our dyno) puts this car at the doorstep of 700 crank hp. Can it be improved with a different bolt on exhaust? So what’s all involved in swapping an exhaust on a Porsche 911? First up is removing the rear bumper cover. Most of the hardware is fairly accessible but don’t forget the two hidden fasteners under the black bumper pads. We also removed the taillights in order to keep everything safe from potential mishaps. With the cover off, this exposes the actual bumper and attached exhaust shield which are all removed in a very logical manner. At this point it’s time to remove the hardware from the turbo flanges. Now, being a midwest car, things tend to rust up a slight bit. So as a way to beat the corrosion and keep the studs from seizing and breaking during removal, we torch the nuts till red hot and then shock it with cool water to rapidly break off any corrosion that may have formed. Once the flange nuts are removed, it’s time to remove the straps that wrap around the muffler and hold it up into the body. Using two people; we had one hold the muffler in place while the other removed the O2 sensors from their bungs. Now the exhaust is free and installation is reverse of removal. I wrote this not as a DIY but rather an explanation so you can get an idea of what has to be done in order to pop a system on and off; so please don’t use this as a guide. On to the Numbers! For this comparison, we have the Fabspeed catless supersport X-Pipe. Fabspeed states that this particular exhaust offers a node between their muffler bypass system and the Maxflow muffler system they sell. The Best Milltek run produced the baseline figure of 514hp, while the Fabspeed produced a top run of 517hp. When accounting for drivetrain loss, that’s a 5hp gain. Thought it’d be more? Well, lets go over the design differences. Right off the bat, the design changes between the two are obvious. The Milltek design utilizes a chambered muffler with a balance pipe in the center to connect both units. The Fabspeed uses mandrel tubing throughout that merges into an X in the center. Which is better? Well that depends what you want. As seen in the dyno graphs, the smooth mandrel piping bends of the fabspeed unit direct air out of the turbo with less effort, helping the torque to come on a bit earlier in the power band. After this spike, the gains become less significant. It may be assumed that with the extra size and removal of catalytic convertors, the top-end power should be even greater on the Fabspeed unit; however, we think the tightness and radius of the X may be causing gas turbulence to reduce the maximum possible gains. It would seem that the volume of the Milltek unit is great enough to keep the vehicle breathing, even with the catalytic convertors in place. It would be interesting to see what would happen if the cats were removed off the milltek unit, as we suspect this would produce power above both setups. What should you buy? Well, the customer decided to go with the originally installed Milltek. It seems after driving the Fabspeed around for a bit, he decided that the sound and volume were just a bit much for his taste. This speaks very highly for Milltek’s exhaust design with their 100 cell cats, even though the Fabspeed did show a noticeable gain. Our take? You’ll save a bit of money and make more power with the Fabspeed, but, if you want refinement and a good balance (better for the environment too) go with the catted Milltek.